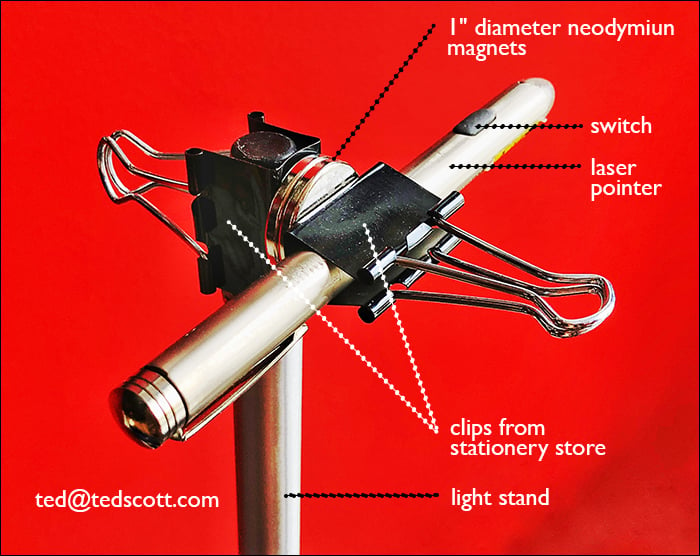 A few years ago, I became interested in what stuff looks like when falling through space. Specifically, I wanted to see the accidental shapes which occur when something is unrestrained in the air.

First, I asked a young woman model to jump from a wall about two feet high. This way I could see the configuration of her body when she was in mid-air and not posing. Interestingly, when she was concentrating on something else — the landing — and her pose was sort of beyond her control.

Then I took some photos of the model lying on a sheet. I separated her image from the background sheet, and placed her “floating” body on a public domain photo of the crab nebula. There she was, floating in actual Space.

My latest fantasy was photographing falling diaphanous fabrics to see the shapes they formed in mid-air. I thought that would be interesting.

The logistics of that project were somewhat daunting until I found a device, the MIOPS smart trigger, which would trigger a camera when a laser beam shining into the device was interrupted. 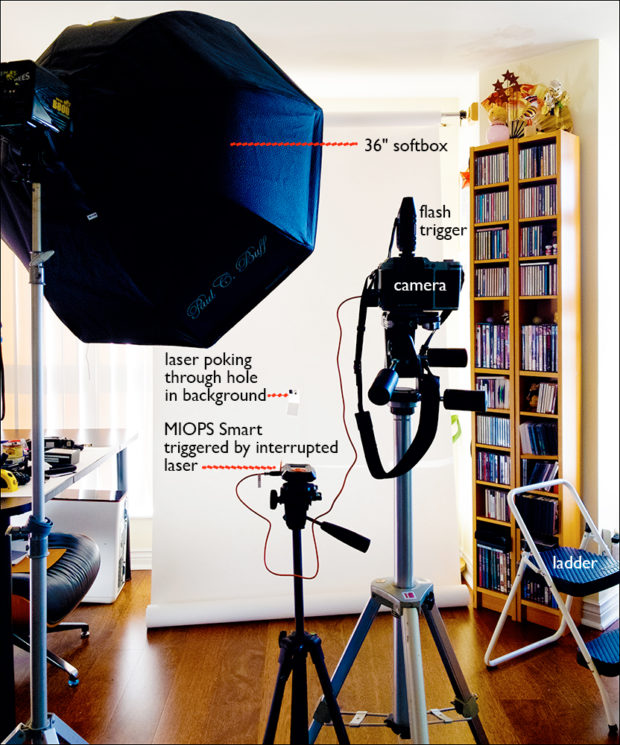 Aiming the laser-pointer beam at the MIOPS trigger takes some care since the receiving window is only about 5mm (1/8”) in diameter. I bought a somewhat expensive gorilla-type clamp to hold the laser pointer, but that was too jittery. As a last resort, I invented something which cost me about $3 and which works perfectly. 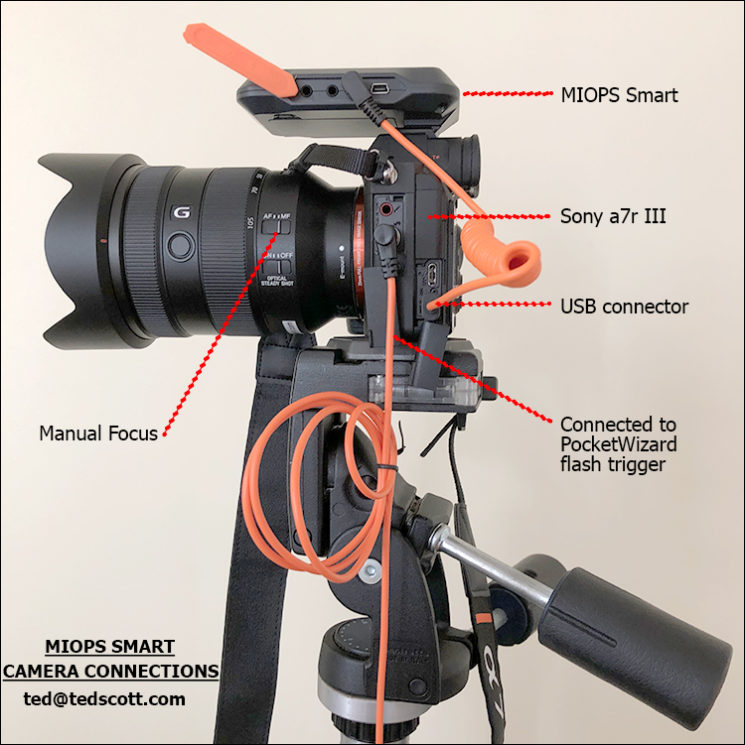 With my gadget, the laser beam is easily adjusted by simply rotating the laser pointer up or down; the magnets will allow sliding. Sideways adjustments are made by rotating the upright of the light stand.

Fortunately, when a falling fabric breaks the laser beam to trigger the camera, the fabric covers the hole in the background, and the laser, as viewed by the camera. Sometimes, the green laser dot shows through the thin fabric and must be removed in Photoshop.

I made the first batch of pictures with the Sony a7r III, for which all of the connections are shown in the photo. I stood on that short ladder shown on the lower right of the first photo and carefully dropped each piece of fabric in a different way each time. It was magical to hear the camera’s shutter fire—and see the flash go off—when the fabric broke the laser beam! Success! The fabric continued to move about 6” after breaking the beam before the camera operated—a minimal delay.

I noticed in the enlarged images a slight motion blur. The large soft-box flash was not fast enough to freeze the motion of the falling fabric. 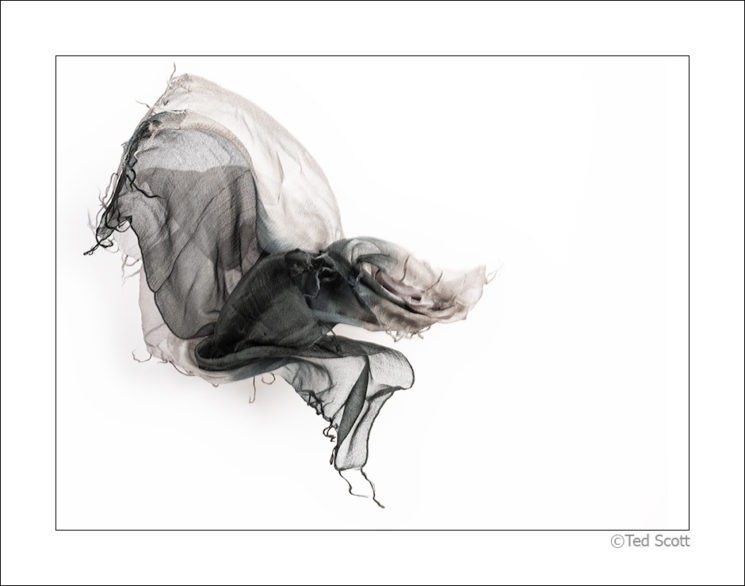 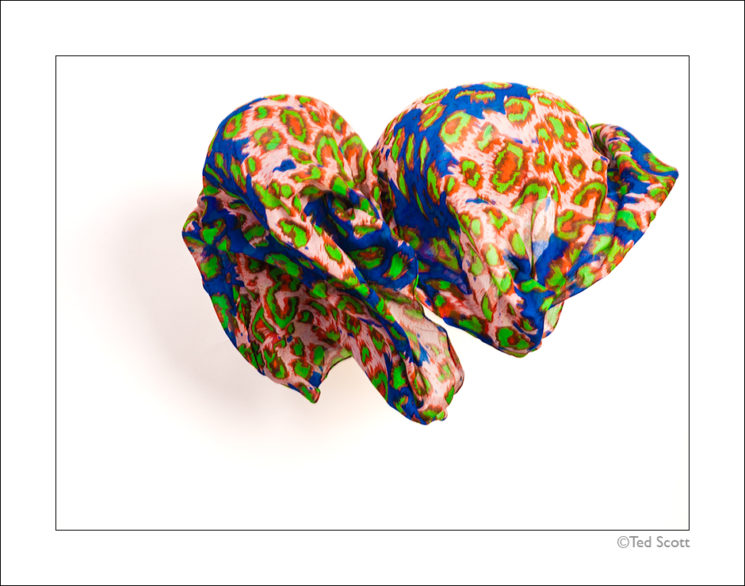 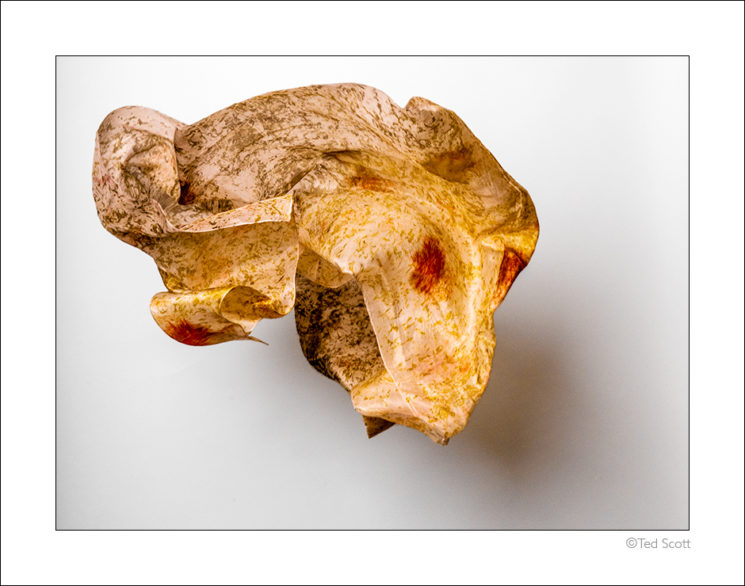 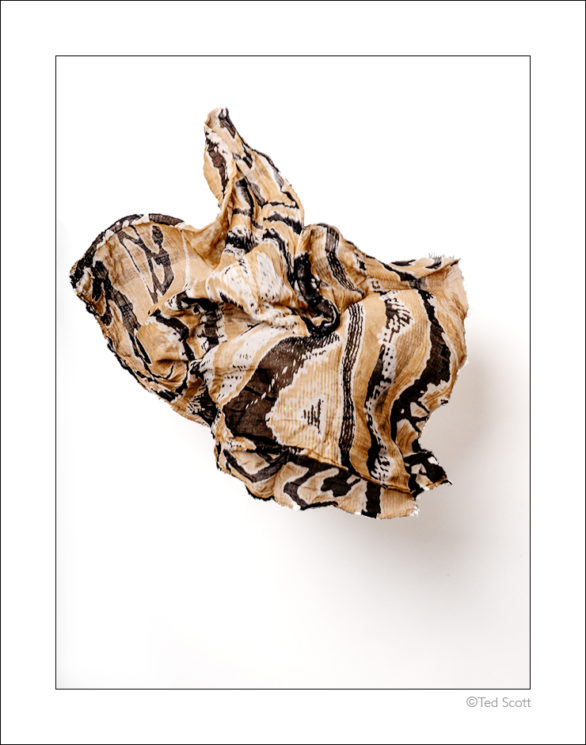 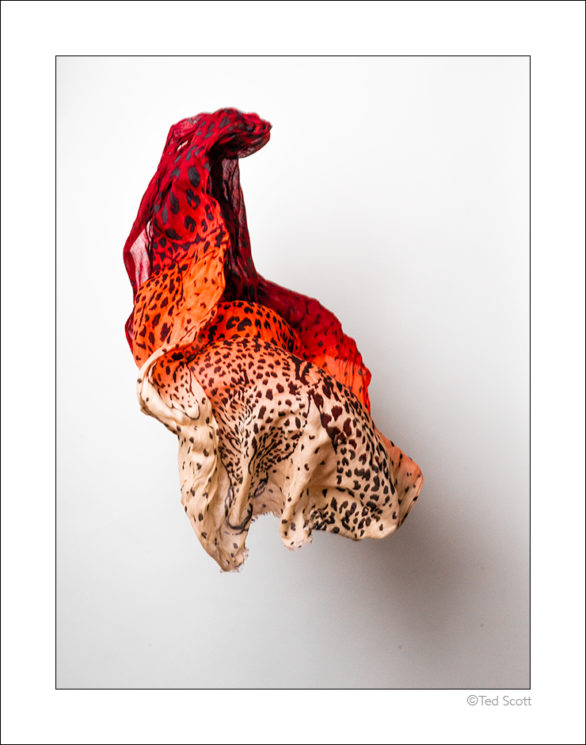 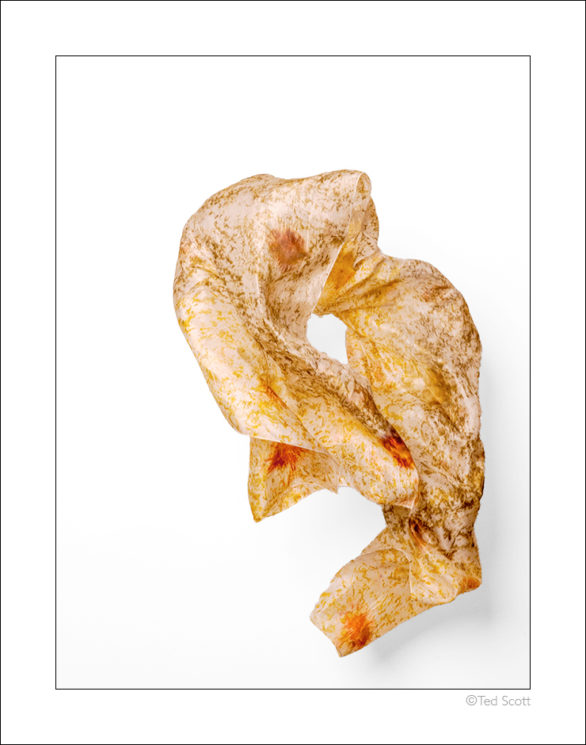 I’ll use the unique characteristics of the Hasselblad X1D camera’s in-lens shutter, which will sync with a flash at any shutter speed! Problem solved! The sync speed (1/250) of the Sony shutter is just too slow to freeze the action.

I switched cameras, made all the required connections, climbed the ladder to drop the fabrics, and made the final photos with the image frozen by a 1/1000 second shutter speed on the X1D.

No such luck. When I looked at the photos on the camera’s LCD, I only saw the white background. Sadly, the one-second shutter delay of the X1D is so slow that the fabrics had hit the floor before the camera took a photo!

Ted Scott is a photographer and lecturer based in Toronto. You can see more of his work here.