Speaking to a camera is rarely an easy thing. Even for seasoned professionals, it can take several takes to get all the words out without screwing something up. Most YouTubers understand this problem intimately. But there is an easy tool to help you stop flubbing your lines, shoot in fewer takes and ultimately take less time to shoot your videos.

In this behind the scenes look at how he shoots his videos, YouTuber Manny Ortiz walks us through the gear he uses to create his videos, including his favourite tool to stop him messing up his lines, the Parrot Teleprompter 2.

Manny walks us through his whole setup, which is fairly compact and efficient. He uses a Sony A6400 camera with the Sigma 16mm f/1.4 E mount lens to record the video, and the audio is handled by a Sennheiser MKE600 shotgun mic plugged into the Sound Devices MixPre-3 portable audio recorder. The scene is lit by an Aputure 120D inside a large softbox for some nice soft wraparound light.

But where Manny really starts to get excited is when it comes to his teleprompter, the Parrot Teleprompter 2. The Teleprompter 2 was released back in 2016 via Kickstarter, and is the ideal solution for YouTubers and low budget productions who can’t justify spending on more expensive systems (that take up way more space). 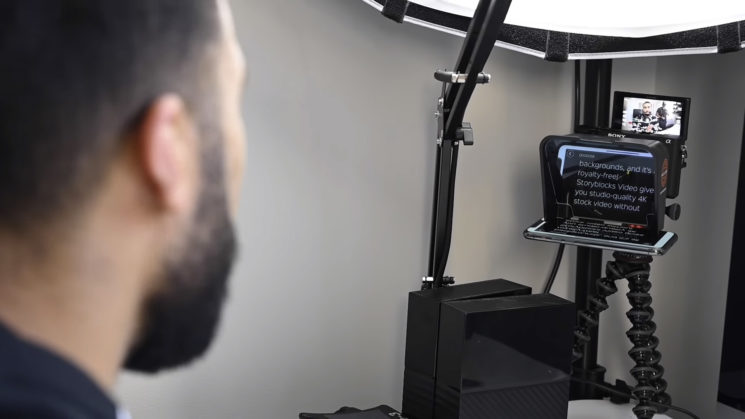 Teleprompters work by reflecting an image up from below the camera, onto the glass, and then back towards the subject. But this reflected text can’t be seen by the camera itself. It just sees the subject. So, it lets you keep looking at the lens while reading your lines. Then, you should never forget what you were going to say or struggle through complex sentences.

Despite Manny’s obvious zeal for the Parrot Teleprompter, I don’t know if I’d go so far as to call using a product in the very way it was designed and intended to be used a “hack”, but it certainly shows off the usefulness of teleprompters regardless of whether you’re filming yourself or somebody else speaking to camera.

The Easiest Camera Rain Jacket Ever