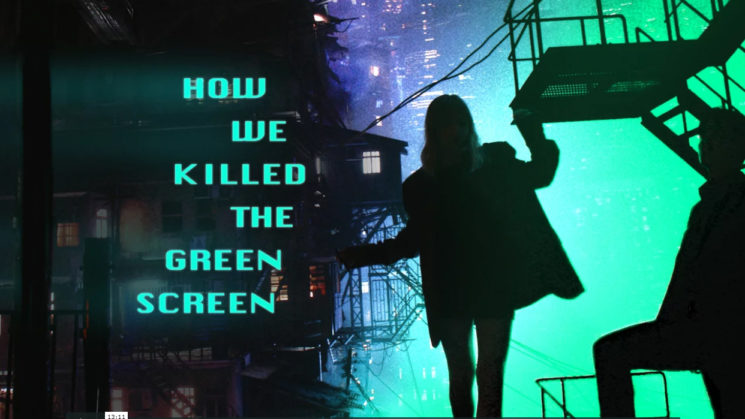 When he wanted to create a futuristic movie in his imaginary world, a green screen was not an option for Michael Plescia. It was too expensive and way too time-consuming to composite every frame. So, he gathered a dream team that helped him reinvent filmmaking and make his movie possible. He shares the story of how he killed the green screen and brought his idea to life.

Since he realized green screen wasn’t going to work for his movie, Michael saw the tornado scene from the Wizard of Oz. It was filmed without a green screen, using rear projection, and it gave Michael an idea. He was set to create virtual worlds and shoot his movie in camera, with real light and real lenses, with no green screen.

Michael’s initial idea was to just put a photo backdrop behind the actors. However, the problem was that it would be flat and it wouldn’t move. For his movie, the screen would have to adapt to a handheld camera’s perspective. So he thought: why not rendering all the angles and make the backdrop bright enough, big enough and fast enough so it is seamless with the foreground?

And so, Michael teamed up with his friend Rene Amador and co-founded ARwall. They developed the technology that allows the filmmakers to do exactly what Michael’s idea was. They can shoot an imaginary world in-camera without any post-production or green screen. The backdrop moves along with the camera and the actors. It uses a visual effects compositing technology that combines the imaginary scenes on the screen with the “oldest (and maybe best) trick in the filmmaking book.”

In the video above, you can see the entire development process, meet the team and hear more about the challenges they encountered. And finally, you can see the test footage of the “real-time, in-camera, real-light, real-lens, perspective-adapting, mixed-reality, rear-screen, compositing technique,” as the team describes it. It’s trippy and looks fantastic, and I’d say it was definitely worth the effort. So make sure to watch the entire video and see for yourself.

[How We Killed The Green Screen | Michael Plescia]

« The first Sony A7III firmware arrives to fix “blinking pixels” in video and prevent touchscreen death
Shooting with Helios-65, a lens so rare there’s no adapter for it »