Time-Lapse | Earth is a time lapse edited by Bruce W. Berry Jr, and it is one of the most beautiful timelapse sequences I have ever seen. 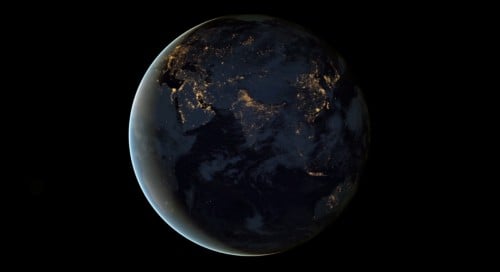 Here is the thing though, Bruce did not take a single shot to create this movie, nor are they digitally rendered. It was all done with pictures shot by the ISS team and made available for public use by NASA (Here, here and here).

I am placing the movie (and some info) after the jump to make sure you sit back, go full screen and turn up the audio before you continue.

Here is how Bruce describes his process:

“All Time-lapse sequences were taken by the astronaunts onboard the International Space Station (ISS) (Thanks guys for making this available to the public for use!) All footage has been color graded, denoised, deflickered, slowed down and stabilized by myself. Clips were then complied and converted to 1080 HD at 24 frames/sec.

Some interesting tidbits about the ISS. It orbits the planet about once every 90 mins and is about 350 Km/217 miles. The yellow/greenish line that you see over the earth is Airgolw…

… Footage Note: The slower video represents a closer resemblance to the true speed of the International Space Station; this footage was shot at one frame per second.”#

among the scenes are some very power ones, just to name a few:

But all the footage is really remarkable.

This is what I like about space exploration, NASA and putting it out there. Everyone who wants can take a shot at enhancing it. Here is a different take on similar photos: Incredible Time Lapse Created By Stacking Images From The ISS