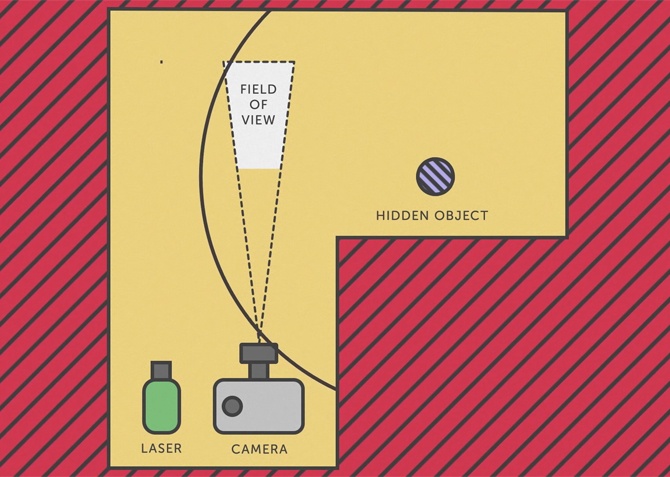 Whether one is trying to photograph far away objects with a massive telephoto lens or using a microscope to document the tiny creatures that surround us, the rule is simple – if you can see it, you can photograph it.

It turns out, however, that objects don’t need to be visible to the lens in order for the camera to “see” them, as a research team from Scotland recently demonstrated.

A first of its kind camera is able to spot and track moving objects around corners in real time using short pulses of light from a laser beam.

The idea is pretty simple and seems very similar to echo-location, except it uses light instead of sound waves.

A laser is pointed to the floor just beyond the edge of the corner and the light spreads out in all directions. Some of it hits the hidden object and finds its way to the camera.

Like I said, it’s simple. But, say the researchers, that doesn’t mean you can pull off this stunt with just any camera.

Using a regular camera you won’t see anything, which is why the researchers use a specialized and ultra-sensitive camera. And by ultra-sensitive we’re not talking about a measly ISO 4,000,000 like Canon’s ME20F-SH, this camera is capable of capturing a single photon!

Speed is another important factor in this camera, and once again it shames every other camera you have ever used. A video of the echoing laser beam is recorded at 20 billion(!) frames per second. This is a fascinating contraption, but my god that sounds like a boring movie to watch.

The data is then analyzed and the object’s distance is found based on the amount of time it takes the laser echo to return to the camera, while its direction is discovered thanks to the shape of the laser being recorded as well.

It might sound like a complicated and time consuming process, but all these calculations take just one second. This means that the camera is able to follow moving object.

“For future use, this could be incredibly helpful for [computer assisted] vehicles to avoid collisions around sharp turns. . . or emergency responders looking see around blind corners in dangerous situations,” Popular Mechanics quotes Genevieve Gariepy, the team leader at Edinburgh’s Heriot-Watt University.

This technology is still in its early stages but the results are promising. Already now the camera was able to estimate the size of the foam figure in the video above with a 20% margin of error, and preliminary tests showed it was able to track multiple objects simultaneously.

Gariepy added that this system’s uniqueness is in the speed in which it gets the job done, rather than its ability to see around corners. Echo-mapping has already been done and some cameras will even construct rough 3D images, she said, “but these other technologies, especially ones based on 3D constriction, are quite slow, taking minutes or even hours to create a snapshot”.

“Let’s just say that, after an hour, you’ll be well aware if there was a car coming toward you from around some corner,” Gariepy explains the importance of the specialized camera.

“Now that we’ve shown the proof of principle we’re focusing our experiments on bigger scales, looking to detect objects at much larger distances,” she concluded.

Road safety and military causes are all good applications, but I want to see a consumer level ‘CornerCam’.