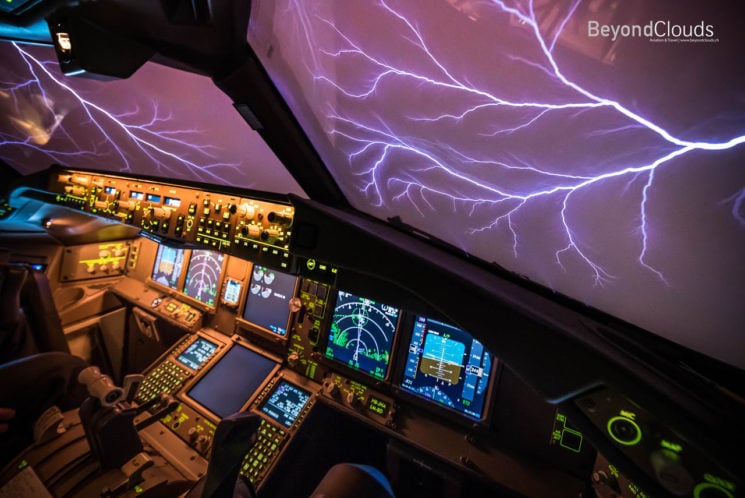 I am quite fascinated by both thunderstorms and photos from an airplane. But what about taking a photo of a rare weather phenomenon straight from the cockpit? This is exactly what Swiss pilot and photographer Sales Wick did while en route to Brazil. He captured pretty rare St. Elmo’s fire and it looks like the airplane is engulfed in it. The photo is impressive and scary at the same time, and I just had to contact Sales and find out more about it! He kindly shared the photo with DIYP, as well as some details on how it was taken.

The photo was made while Sales and his crew were about to cross the inter-tropical convergence zone near the equator. This is when they got to admire its “side-effect,” the St. Elmo’s fire you see in the photo above. But although it looks terrifying to see a plane “swallowed” by the lightning, Sales explains that there’s actually no hazard at all. Can you believe that? “It is caused by the clouds electrically charging the atmosphere and becomes visible as a luminous electrical discharge once the electrical charge becomes sufficiently intense,” he explained to DIYP.

Still, the sight is spectacular, and so is Sales’ photo. He admits that’s one of his favorite photos he’s taken, and he submitted it for the International Photography Award (IPA) 2018. Not surprisingly, it won the first place in the category Non-Professional Special, Other.

If you’re wondering about technical details, the photo was shot with a Sony A7s paired with a Canon 14mm II/f2.8 connected with a Metabones Adapter. And worry not, Sales doesn’t fiddle with the camera while he’s flying an airplane. “The camera was installed earlier during a part of the cruise flight with the low workload,” he tells us. “It was triggered by an intervalometer as this impressive phenomenon is rather faint and in order not to be distracted while crossing this weather zone.” Sales used a suction mount to hold the camera securely in place, and way outside his field of view. The intervalometer did its thing, and Sales picked the best frame later on.

This particular photo was shot at ISO6400, f/5.6 and at of 1.3s exposure. It was challenging to take it at these settings the low-light conditions, and because they were passing through a zone of light to moderate turbulence. There’s also very little space on the flight deck, but hey, despite the challenges, it all turned out awesome!

Sales Wick is a pilot and photographer from Switzerland. He has brought these two passions of his together with the goal is to share the beauty behind flying. He wants to show the world all the wonders pilots get to see while soaring high above the earth, but also to show that their job is way more than just pushing buttons.

Despite being the son of a photographer it took Sales a long time until he started to be interested in photography himself. “It was a few years back when I bought myself my first DSLR and started to capture the beautiful sights I get to see while working above the clouds or when visiting far-distant places. My work evolved and so did my ideas. I challenged myself with new ideas on how to capture the flight deck, my colleagues or the landscape beneath from a different angle or another approach as seen before.”

Important note: to ensure he is able to devote himself entirely to the cockpit during the flight, as with all the Instagram contributions, Sales’ photos are taken on permanently installed cameras or from the jump seat.

Make sure to check out more of Sales’ impressive work on his website, Facebook, and Instagram. He also founded a small video production company Sky Production in Switzerland, where he produces videos for companies mainly in the travel industry.