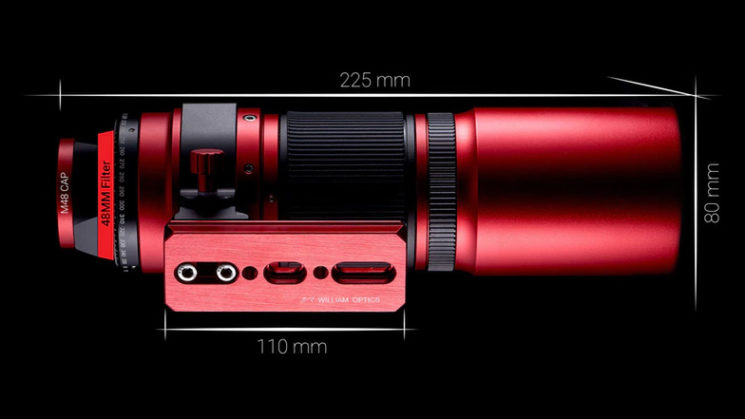 Interestingly, though, it’s based on a Petzval design, which is typically more associated with “swirly bokeh” than sharpness. But this lens uses a pair of synthetic fluorite elements to correct those issues in an attempt to produce sharpness across the entire frame. At least, that’s what their Kickstarter campaign says.

Designed primarily for astrophotography, Taiwan based William Optics is no stranger to such application. Their About section says that they’re “one of the world leaders in short-tube, highly-portable refractors”, producing equipment at both entry-level and high ends of the user spectrum.

The new lens, known as the RedCat 51 APO 250mm f/4.9 is a fast Apochromatic refractor that’s both small and lightweight with a full frame 35mm field of view. As mentioned, it uses a Petzval design with synthetic fluorite elements to produce a flat field image and overcome the issues inherent with the Petzval design.

Looking at the sample photos on the campaign, as well as this footage shot on the Panasonic GH5, it certainly does seem to live up to its sharp claim. Whether it’s the sharpest or not will have to wait until we can see some real side-by-sides, but for now, I think it’s definitely sharp enough.

Of course, the Panasonic GH5 is a 2x crop body, not full frame. So, again, we’ll have to see how well it performs on full frame once the lens ships and is out there in the world for people to play with.

One of the interesting things about it, is that it comes with an interchangeable lens mount. Essentially, it’s an M48 thread, and adapters will be available for Nikon F, Canon EF, Pentax K, Sony E and Micro Four Thirds. But the design offers future-proofing for other cameras, like the Nikon Z mount, Canon RF, and Leica L. All it needs is a new adapter.

It’s an interesting lens, that looks rather good for wildlife as well as astro, given the footage above and the sample photos on the campaign page. I’m curious how well it would work for portraits, although being a manual focus lens, I’m not curious enough to back the project myself.

If you want to, though, you’ll want to hurry. It’s already doubled its funding goal, and only has three days left to go. You can pledge through Kickstarter now for $649 (93% of the final retail cost once the campaign’s over), which includes the lens, Nikon Canon or Sony mount adapter, a soft carry case and their patented Bahtinov Mask. Lenses are expected to start shipping at some point in March.