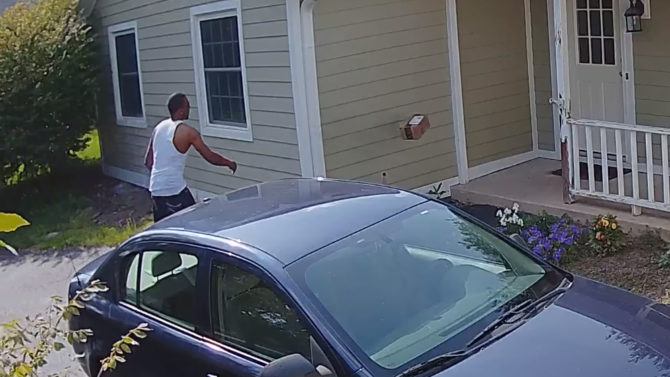 I always thought, perhaps a little naively, that when packages were thrown in my general direction I simply got a crappy delivery guy. As it turns out, this seems to be standard practise if the responses to this Reddit post are anything to go by.

User mlapaglia told DIYP that he ordered a Sony E 35mm f/1.8 OSS Lens through Amazon. Being in something of a rush, he opted for same day delivery through a company called LaserShip. This is what LaserShip thinks of $500 lenses, and it turns out that they’re not the only ones.

Packaged in the usual Amazon box, there were no markings on it that would suggest its contents were fragile. “The lens was well packaged”, mlapaglia told DIYP, “and does not appear to be damaged due to the delivery”. Hopefully this proves to be true in the longer term.

One “bump” like this may not be a big deal, but some comments in response to the post astounded me. It seems that it is not only standard, but it’s practically company policy.

Back when I worked at UPS loading trucks, the way we kept packages secure was to build them into walls of boxes… And you had to beat the shit of the box to make the wall tight and strong enough that it wouldn’t collapse when the truck driver hit the brakes. This is how we were trained by supervisors.

Quite a few commenters report having worked or still working for very well known delivery companies. Some of those suggest that this is nothing compared to what happens before the package gets even close to your house. They also don’t seem very apologetic.

He does go on to state that they don’t intentionally damage packages. Of course, they’re not making a conscious effort to be all that careful with them, either.

Reading the entire conversation on Reddit, it gives a strong argument for supporting your local camera shop vs ordering online. Sure, items are still shipped there, but at least if anything suffers damage on the way it’s easier to have replaced or repaired.

Again, call me naive, but I didn’t expect Ace Ventura to be quite so true to life.

I receive quite a lot of packages, a mix of purchases and products sent to me for review. It’s rare that anything arrives completely annihilated, but it has happened a few times.

I assumed they were simply the result of exceptionally rough handling by a small number of employees. In hindsight, it appears it was just inadequate packaging, and the others simply survived better.

If nothing else, it certainly makes me rethink how I package things to ship to others.

Have you ever received a package so visibly damaged that you refused to accept it? Do you regularly see treatment like this of packages intended for you? Have you tried to claim against a delivery company on a broken item? Did it go well? Tell us about your shipping experiences in the comments.