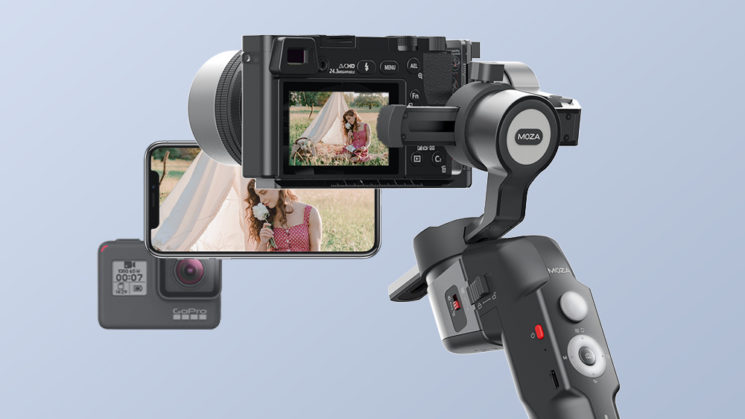 Gudsen has just launched their new MOZA Mini-P. It’s a $199 gimbal that works with everything from action cameras and smartphones to compacts and small mirrorless cameras. And it folds up small to pack away when you’re not using it, too.

A prototype of the the new MOZA Mini-P was first shown off in September last year at the Beijing International Radio, TV and Film Exhibition (BIRTV). It seemed pretty promising, even as a prototype. It was expected to be officially announced shortly after BIRTV, but that didn’t happen. Now, though, it’s finally here and the specs are confirmed.

The Moza Mini-P appears designed primarily for travel and adventure vloggers looking to pack light while still being able to stabilise as many different small camera systems as possible. And so the MOZA Mini-P has a payload capacity of 130-900g meaning it can utilise a multitude of small cameras, including action cameras, smartphones, compact cameras and small mirrorless cameras. And it can mount them vertically, too for those Instagram Stories and other social media content.

Despite the emphasis on smaller systems, the 900g payload means that it can actually handle cameras as heavy as Sony’s A7 series, with a light enough lens, and it can actually communicate directly with the A7, A7R and A7S series cameras (although not the A7R IV for some reason) for shutter, record and autofocus. It also lists the A6x00 series mirrorless cameras along with their RX100, RX10, RX0 series compacts and the WX500, HX60, HX90 and HX99. For Fuji, we’ve got the X-A7, X-T3 and X-T2. And for Canon, it’ll take the EOS RP, M6, M6 Mark II, M200, M50, M5 and 200D, although without start/stop record function.

When it’s not in use, it folds up for easy packing in your bag or backpack and it has a very impressive 20 hours of battery life on a single charge. It looks like it can utilise Type-C USB Power Delivery, too, offering power inputs of 5v at up to 2 Amps as well as 9v at up to 2 Amps for faster charging.

It’s nice that it offers such a wide range of compatibility for smaller cameras. I just picked up a Panasonic GX85 a few days ago (although we call it the GX80 here in the UK). A gimbal like this could serve it well, and also be useful with my Insta360 ONE R (with the 4K module) and my smartphones, too.

The MOZA Mini-P is available to pre-order now for $199 from the Gudsen online store and should appear at B&H and other retailers soon. Shipping is expected to begin in the next week or two.