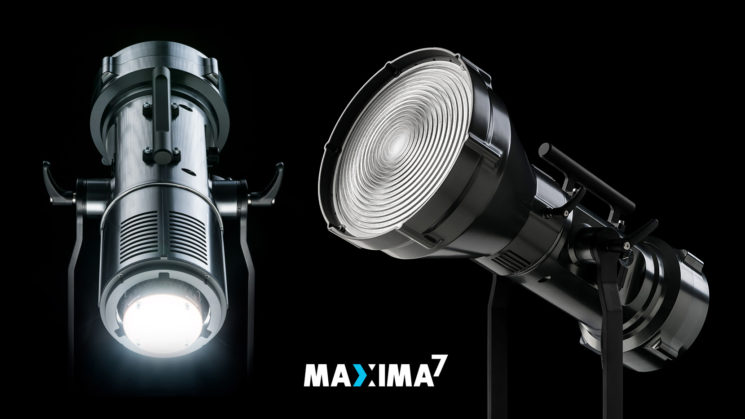 LED lighting technology has come very far over the last decade. It’s replaced the more traditional incandescent “hot lights” we used to see in video, movie and photography studios. The Maxima 7 is a new 5600K Chip-on-board (COB) LED light that’s the equivalent of a 1.2K HMI that lets you pretty much recreate the sun on your set.

It’s being developed by a company in Italy, and while there are other 1.2K equivalent LED lights out there on the market, this one wants to separate itself by form factor, light output and versatility. It even has a Bowens mount to let you use softboxes and other modifiers.

When it comes to sheer power, the video above shows that there’s a lot to be impressed by, mostly keeping up with a 1200W HMI. That light all comes from a 700W proprietary daylight COB LED with a CRI of 96+ and a TLCI of 97. On the front of the aluminium and polycarbonate body, there’s a removable 250mm (10″) focusable Fresnel lens made from borosilicate glass, which is designed to take the heat (it’s the same stuff they make the glass from for heated 3D printer beds). 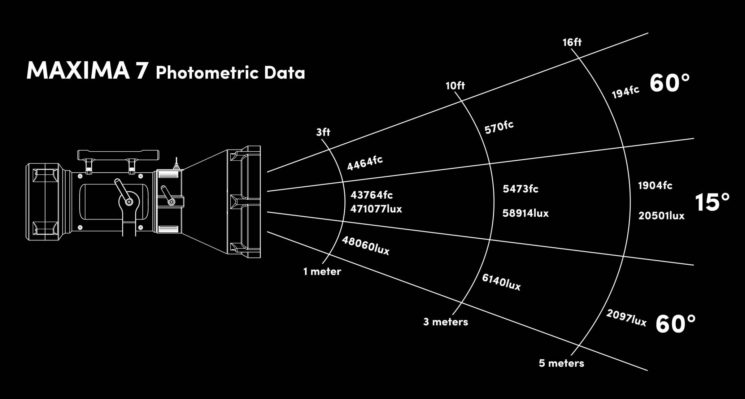 There’s also a Bowens S-Type mount on the front for popping softboxes or other modifiers on for when you want something a little softer than just blasting a ton of light straight from a relatively small light source straight onto your subject.

The manufacturers say that their proprietary COB LED light is flicker-free, at all framerates and throughout the entire brightness range. They have a pretty convincing demo video to back up that claim, too, showing shutter speeds as fast as 1/10,000th of a second.

While the power and lack of flicker are already pretty good, it manages to do it with an impressive 96+ CRI and 97 TLCI for excellent colour reproduction. According to the colour performance charts posted on the Maxima 7 website, they should be able to handle the needs of many use cases.

But this light isn’t just bright, flicker-free and accurate. It’s also smart. The brains of the Maxima 7 is an ARM Cortex M7, meaning that it packs a whole lot of power into a tiny little chip. The Maxima 7 also features Bluetooth and a dedicated mobile app, or it can be controlled over 2.4Ghz radio or even a USB cable. Unfortunately, the USB socket is Type A, not the more recent Type C, so you’re still gonna be clinging onto those old cables.

Although the Maxima 7 is being billed as “Your portable sunlight”, you won’t necessarily be able to take it with you absolutely everywhere. It can only be powered by AC voltage, which means plugging it into the wall. Of course, you can use a pure sinewave inverter generator out on location, but there is no battery option available. So, it’s only as portable as the gear you need to cart around with it in order to make it work.

Although, it’s not really surprising for a light of this power. At full power, drawing 750W, even a 250W $500+ high capacity V-Mount would only last 20 minutes, tops – assuming it could even supply the required current.

There’s no word on pricing or exact availability for the Maxima 7 just yet, although lights such as this would typically start at around the $1500 mark, and go up to several thousand. Exactly where this will sit in that range is unknown, although the manufacturer has told DIYP that “it will be much lower than what you’d expect from such a high-tier tool“.

At the moment, they tell us that they’re stress-testing the pre-production units, but we should expect a further announcement on availability in the next couple of weeks. For now, if you want to find out more, head on over to the Maxima 7 website.

They melted an espresso machine with 60,000 Watts of light for this photo & video shoot

« Can you still take photos even with a cracked lens?
The 8K Canon EOS R5 to make its public debut at The Photography Show in the UK »