A few weeks back we featured a crazy video where bokeh golblins took over New York. Our Bokeh Masters Kit has been around, but nothing to that extent – I loved how much detail the bokeh goblins had and how their eyes moved so I asked the director Bradonio if he could explain how it was done. Following is his account.

The following is a quick description of the “bokeh silhouettes” in the Gramatik music video “Solidified”, if you don’t recall the video, here is a quick reminder.

A quick search online for “bokeh” pulls up some beautiful experiments that people have been doing for quite awhile, both in photo and video. Our hope with this project was to continue to build on these techniques, by playing with silhouettes inside of the bokehs that have both motion and personality to them, as well as creating a simple story driven by the technique itself. That’s my favorite type of video to work on, getting to mix some geeky camera tricks with a quirky storyline.

A Bokeh is the quality of the blur in the portion of the image that is not in focus. When that involves a light source such as a streetlamp or headlights, they can make that beautiful solid circle from the blur from each of the lights.

When you then take a paper cut-out and put it directly in front of the lens, these circular shapes from the bokeh of the streetlights act as the backlight to the cut-out, creating a type of silhouette. The fun part is that the silhouette from the single cut-out shows up inside of each “high quality” bokeh. 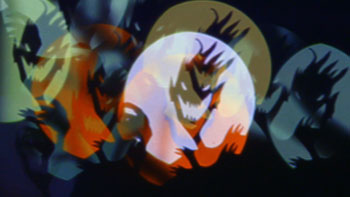 It was important to have some fast lenses, as the larger apertures tended to give the strongest bokehs. For our shoot, we used the following lenses:

The camera used was the Canon C300, and while we lived mainly around 1600 ISO, there were times where we pushed it much higher, but always tried to stay below the 6400 ISO mark. It was a noticeable low light improvement over the 5D.

Lighting wise, we only brought in additional lighting (beyond what the city lights already had to offer) during the scene with the “possessed man,” in which we put up one to two 1×1 Litepanels.

Putting It Into Action

Here is a behind the scenes look at the paper cutouts used to create the silhouettes inside of the bokeh:

One of the methods we used was to have the city lights start in focus, then as we rack out of focus (creating the strong bokeh) we would insert the paper cutout in front of the lens. 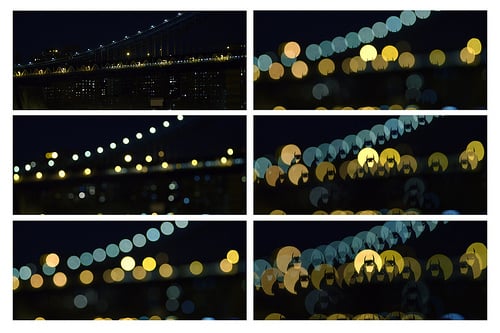 The same was done in reverse, as we racked back into focus on the city lights, we would pull the paper cutouts away from the lens, leaving a clear view of the city. 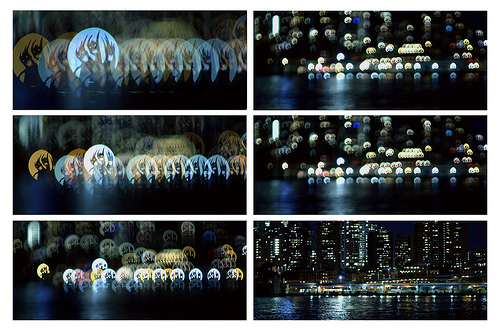 And for some we shaped the bokeh, which is basically the same type of images created when people use a product like the Bokeh Master Kit. A few music videos have come out over the past year using this kit as well, and it had a really nice effect, especially when the light source itself is moving. This is done by covering up the entire lens, and cutting out the shape(s) that you want to make from the bokeh.

Wanting to see this invasion follow through into the real world, is where the possessed man comes in. With the ability to hop from light to light, the creatures eventually end up in the flame being used to light his cigar, and from here he’s as good as a dead man. As he inhales, they find the portal into his body and thus his soul (insert maniacal laugh).

This was the most difficult sequence to create due to how windy it was that night. Getting the flame to stay strong enough to create a bokeh silhouette, along with the timing of the rack focus and actor lighting the cigar proved to be quite difficult. We eventually got it after quite a few takes. 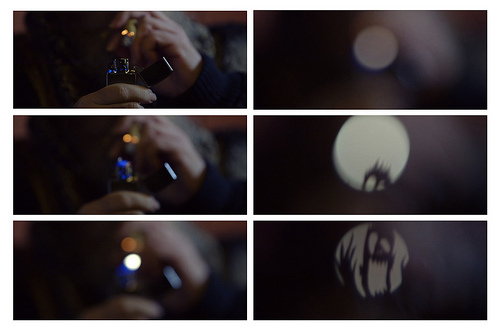 A few of the paper puppets (especially the “rapping” possessed man) also had a set of eyes or mouth that were attached to a separate stick, so we could move them independently and give moving parts to these creatures. That was key to give them personality. Most of these cutouts are not any bigger than the front of a lens, so only a few inches high. 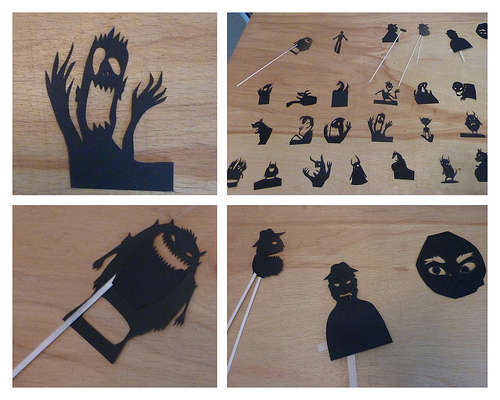 With the above methods, there was a lot of experimenting during the shoot…

To make the bokeh silhouettes pop, the blacks were crushed in post, and some blue was added to the blacks and mids. Being color accurate was less of a concern in this video as skin tones weren’t featured very often.

And that’s basically it. Again, there are many ways that bokehs are being used creatively now, a ton of them in still photography and quite a few videos popping up as well. Please feel free to post some links to other videos or photos below. Would be fun to have a collection of bokeh projects here to discuss and continue to learn from.

A word from Brad

As a big note, written here as to not get lost up in the technical information above, I wanted to point out that Andrew David Watson (cinematographer) helped develop this from the very beginning of discovering the idea (while filming another music video, we were shooting through plastic bags to create a “fog effect” on the city, and the hard edge of the ziplock came into frame while we were out of focus) all the way to completion, Tristan Kneschke (editor/colorist) was very involved in the original concept and pre-pro which always makes the eventual process of post go that much smoother, and Brian Walsh at EP*Vision (VFX) was crucial in brainstorming story lines to introduce the creatures from outer space, and then how they’d eventually make it out to the “real world.” Like always, creating this video was a huge collaborative process, both with them to everyone else that was involved to help create and execute the ideas.