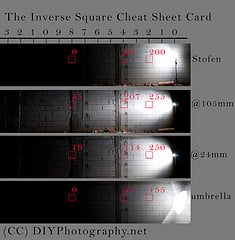 The post stirred up a great conversation from which I learned about Light, some physics and some in camera processing facts. But mostly I learned that it is great fun to experiment and to share your findings. It definitely helped me get my knowledge to a higher level (at the small price of throwing a way my totally wrong fringy and conventions breaking experiment.

Tim took a bit of a different approach to measuring light fall off. Surprisingly, his results were almost dead on with the ISL:

Measured the light with a light meter from a flash on manual mode.
Lines are whole stops. Even when it looks totally dark on the wall you
are still getting light. Light was measured by holding a light meter
flash head high about a foot away from the wall.

This Make Me Wonder What Was Wrong In The First Experiment

Thanks for every one that cheeped in the discussion – I will bring the main points here, however, I encourage everyone to go to the original post, read the great comments, and join the discussion.

Location Of Measurement (Joshua Targownik)
Light has to be measured on Axis constantly. Measuring light off axis contributes to part of the falloff.

Reflected Light and Incident Angle (Joshua Targownik)
The light measured on the original experiment is reflected from the wall (which in itself is not ideal), but further more – the light is reflected in different angles depending on the distance from the flash. The deviation in the incident angle changes the amount of reflected light.

Surface Across The Wall Is Not Even (Anon)
This one is an obvious one – The wall has dents, planes in different angles, and color is not similar across concrete and block – all of which play a part when measuring reflected light.

Blown Highlights (Sean Phillips)
Any measurement that falls on the 255mark is inaccurate. basically the sensor got over exposed, so we don’t know what the exact value of exposure would have been if the light was within the limits.

Even So, There Are Things To Learn From This Exercise

We Still Get To See The Light Patterns (Roger Barnes)
While we cannot deduce about the light intensity, we can see in what shape the light travels with each of the modifiers.

Reflection on the ISL (olli Rinne, Max)
This is a good opportunity for reflection, how can it be that the light behaves the same when it is directed by a small reflector/ lens inside the flash. What factor is missed. Of course, as Olli indicated, light is not a Laser. However, “simple” flashlight, where the light goes through a lens does not obey the ISL. This is a point to think about.
On the other hand, Max came up with a nice metaphor – think about the flash as a collection of point light sources

One way or another, this video will help you understand the Inverse Square Law