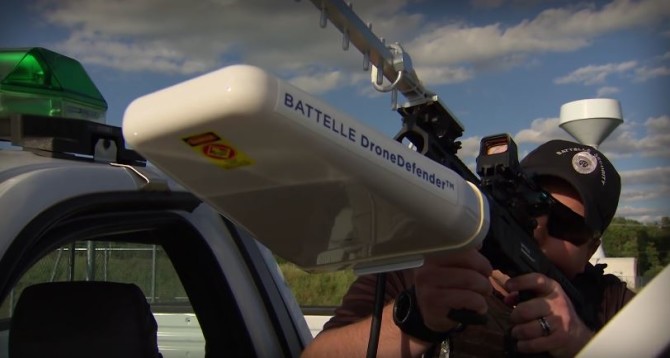 Battelle recently announced the DroneDefender, an inexpensive, handheld, point-and-shoot system that will prevent the ever-growing number of drones out there from becoming security or safety threats.

Using radio control frequency disruption technology, the DroneDefender can disable a potentially dangerous or hostile drone from a distance of up to 400 meters by making it believe it is out of range. This will cause the drone to follow its built-in safety protocol (hover, return home, or slowly descend) and prevent detonation or other remote-controlled functions.

Said to be the “first portable, accurate, rapid-to-use counter-weapon to stop suspicious or hostile drones in flight, providing critical security protection at home and abroad”, the DroneDefender seems ideal in defending restricted airspace and sensitive facilities.

With no fear of collateral damage, it could also be extremely useful in protecting government buildings (*cough* the White House *cough*), embassies and schools.

The anti-drone system is lightweight (up to 10 lbs, depending on configuration), easy to use and can work for five hours straight. It also has a cold start time of less than 0.1 seconds, so law enforcement agencies will never find themselves waiting on the DroneDefender to start up. 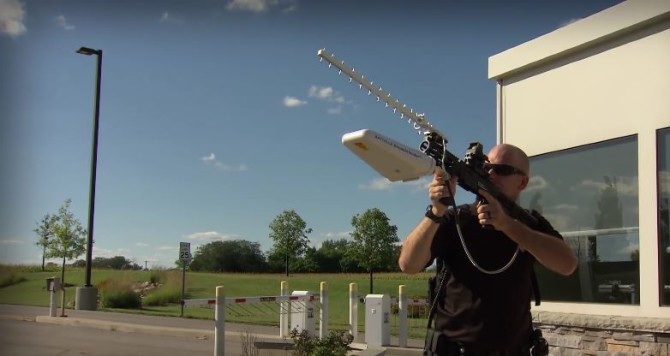 The DroneDefender is planned to go on sale in 2016, but don’t count on buying one of these to take out your neighbors drone. Although the device can be used stateside due to the fact that it’s designed to neutralize the drone threat without damaging it, the DroneDefender operates on non-consumer frequencies that are controlled by the FCC, so its sale will be limited to government agencies.

Earlier this month Califronia Governor Jerry Brown vetoed a bill that would prohibit civilians from flying drones over prisons and jails. The reason for the bill was that drones are being used to drop contraband over prisons, but the governor rejected it stating that the bill would create a new crime, when the aforementioned actions are already illegal. The DroneDefender could somewhat solve the problem of these flying contraband smugglers.

This defense system seems promising, and I imagine it won’t be long before we see a similar system that does not require human intervention.

« Mitakon’s Speedmaster 135mm f/1.4 is a $3,000 limited-edition monster of a lens
“Entering the national air space is a very serious matter” – All Drone Owners Will Need To Register »