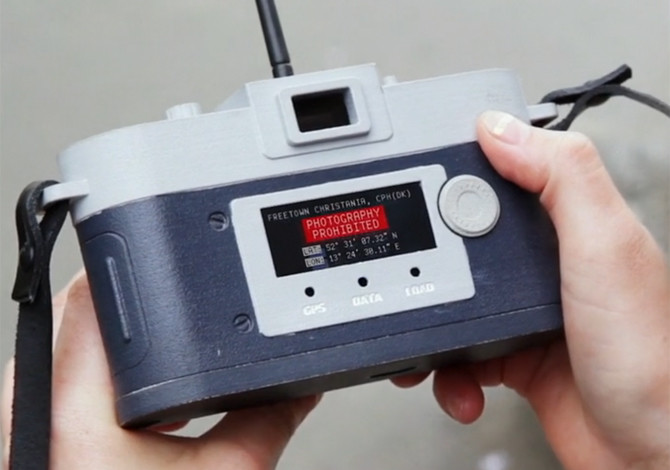 Open any social media platform and you’re pretty much guaranteed to see the same type of photos. If you’ve got a friend in Paris there will a photo of the Eiffel Tower and your cousin visiting NYC just posted a filtered photo of the Statue of Liberty. Two of your friends posted selfies at the gym and fifteen others posted pics from last night’s concert.

Enter the Camera Restricta. This prototype camera uses a GPS to track your location and then searches for photos geotagged in the same area. Should there be too many photos uploaded online from your location, the shutter button will retract and the viewfinder will show a big red “X”, effectively preventing you from taking another photo at an already overly-popular location.

“Algorithms are already looking through the viewfinder alongside with you: they adjust settings, scan faces and take a photo when you smile”, Phillip Schmitt, a designer and artist, writes on his website. “What if your grin wasn’t the only thing they cared about?”

“With digital photography displacing film, taking pictures has essentially become free, resulting in an infinite stream of imagery”, he adds.

In order to determine if an area has been photographed too many times, an area of 35×35 meters around the camera’s location is scanned for photos geotagged on Flickr and Panoramio, with thousands of photos often found at tourist attractions.

In addition to a display on the camera’s screen indicating how many photos have been found from your approximate location, acoustic feedback is also provided similar to a Geiger counter.

Obviously the Camera Restricta cannot identify or rank a photo’s uniqueness, so while it might prevent exquisite photos at popular sites, it will guarantee its photos are at least somewhat unique by allowing them to be taken only at less frequently visited places. Such a device could even encourage people to discover new areas that have not been photographed previously.

The video below provides a few examples from across the globe demonstrating how many photos were taken at specific landmarks and how similar the photos are. Keep in mind that these are only the photos that were geotagged on Flickr and Panoramio, and only from within a 35×35 meter area.

Other than restricting photography at places that are too popular, Schmitt says the “disobedient tool“ could also be used to restrict photography at designated areas.

The recent proposal to amend the Freedom of Panorama, which allows copyrighted buildings and sculptures to be incorporated in photos, is given as an example of a situation when the Camera Restricta’s limiting features could be implemented. In this sense I’m glad this is just a concept design and luckily the proposal fell through.

Where such technology could be implemented more successfully is at museums and such. Other than it being easier to ban photography inside a building than outside of it, it is also more practical. This is due to the fact that you’d have to be in the museum itself to take photos of the artwork, while you could position yourself at extremely varying distances from a building and still be able to photograph it.

Schmitt compares this active form of censorship to that implemented in flatbed scanners. In case you weren’t aware, these scanners include software that prevents bank notes from being scanned.

In a sense this is very similar to the no-fly zones programmed into drones, and in theory this technology could be implemented in devices such as smartphones or camera which use operating systems such as Android.

The Camera Restricta itself is built of 3D-printed body, a smartphone that provides the GPS, data connection, sounds, and the camera screen, and an open source app. A built in microcontroller is in charge of retracting the shutter when needed.

“It is a speculation on a possible new generation of cameras where the once obedient tool becomes an authority,” Schmitt concludes.

The next step should be to invent a camera that prevents users from capturing selfies.

[via The Creators Project]

The Force is strong with this Mandalorian Polaroid camera

« Mary Ellen Mark: “It’s not what you shoot with, it’s the pictures you make…”
iPhone 6s and 6s Plus feature 4K video and Live Photos »