The thing about a GoPro is that if you constantly challenge it to stay in one piece, eventually the odds will accumulate against you and it will fall and hit the ground (see the compilation of videos after the jump).

While a GoPro placed low and getting hit is no issue, having a camera drop a few meter is not healthy for the camera of the people below it. 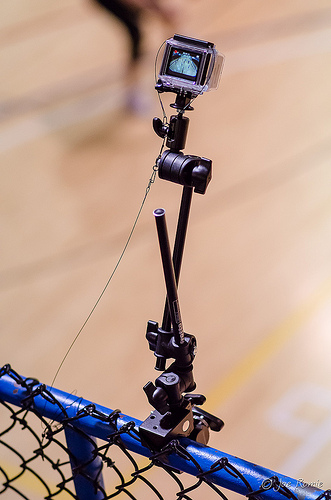 DIYP reader Joe Romie shoots a lot of volleyball and to get interesting angles he places a GoPro over the stadium mounted on a superclamp and manfrotto arm. Here comes the smart part (although somewhat trivial). Joe’s idea for using a GoPro in an impact prone environment is tethering it to the rail with fishing leaders so if it gets hit by the ball, it will not fall all the way to the floor a few meters below.

Here is Joe’s description of the rig (and the stats for getting hit by a volleyball):

“This was the first time using the Matthews super clamp, and first time putting the Manfrotto arms over people. Also the chance that the camera and/or arm would be randomly hit by a volleyball was about 3%.

So I used 24″ wire fishing leaders (45 lbs test) chained together to serve as a McGyver’ed safety cable. But the attachment point for the leaders to the camera housing was made by putting a 12″ leader loop right under the latch, which wasn’t too smart, since that wouldn’t be very strong“#

GoPro Getting Hit By a Golf Ball