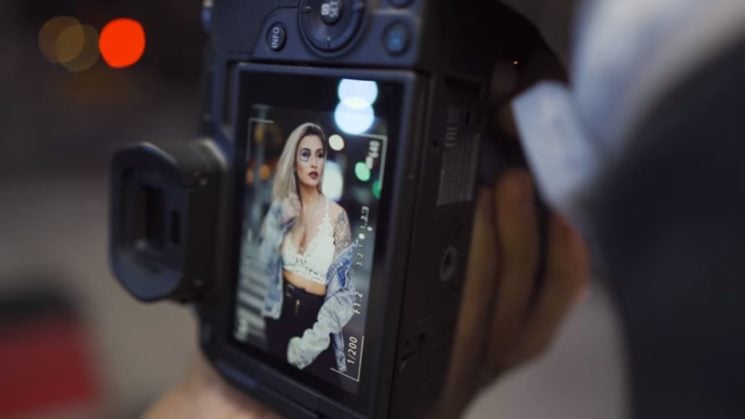 Earlier this year, firmware update brought Sony-like Eye AF to Canon EOS R. But is it really harder, better, faster, stronger than before? Well, Manny Ortiz got to test it out in some tricky lighting conditions, and it turns out Canon nailed it! In the fun video below, Manny demonstrates Canon R’s improved Eye AF in action and shares some of his impressions.

Manny used a Canon EOS R paired with a splendid 85mm f/1.2. He says it’s the best 85mm lens he ever tested, but hey, or that price, one wouldn’t expect anything less, right? But let’s get back to the Eye AF.

Shooting in low light in the street, Manny had to work with what he’d got. He used available light from signs and ads, occasionally pairing it with an RGB Lumee bracelet for some extra kick of color. He shot wide open, and Canon R nailed it every time. It focused on the eyes properly, and by this Manny really means eyes, not the model’s long eyelashes. It looks like the firmware update really delivered what was promised.

Manny describes Canon R’s improved Eye AF as more precise, more predictable, and more accurate. As you can see in the video, it really did a splendid job even in the tricky conditions. Canon EOS R focused properly even when there were people passing in front of the model, it didn’t get confused.

Okay, it looks like we now have excellent Eye AF in Sony, Nikon, and Canon mirrorless cameras. Sony and Nikon have already been compared, and I hope we’ll see how Canon performs compared to them.

[My Opinion has changed on the Canon EOS R | Manny Ortiz]

« Kodak reports film business revenue is up, but overall profits are down
Olympus rumored to shut down its camera business within eight months. Again »