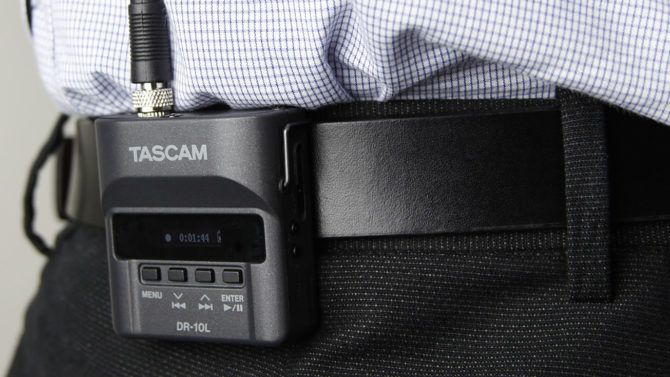 Wireless lavalier microphones have been a standard in the film & tv industries for years. They’re great for picking up sound while staying hidden from the shot. They’re also very useful for moving subjects where following them with a boomed microphone may be impossible. As more and more wireless devices enter our daily lives, however, issues can start to appear.

Interference, signal drop outs, and other problems can happen in densely populated areas. There’s also the problem of knowing whether the radio frequencies of the microphones you’re about to use are even legal in the location at which you’re using them. Tascam has presented us with a very elegant solution to these problems with the new Tascam DR-10L belt mounted lavalier recorder.

The issues of wireless aren’t going to affect many who are shooting in low population areas with little interference. I have a pair of wireless lav mics that I use for recording videos, which happens mostly outdoors and away from towns and cities.  The Tascam RD-10L does offer other advantages, though. 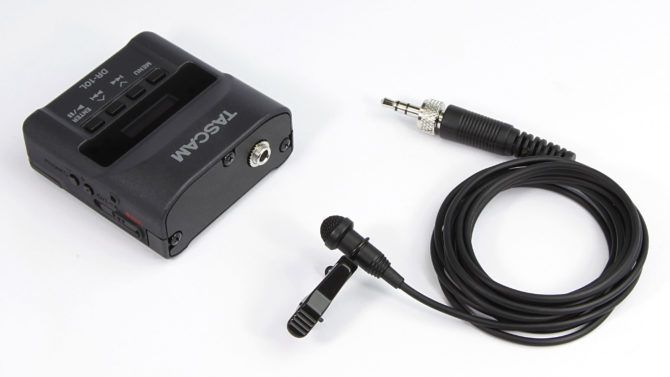 When I record myself using a lav mic, I have the mic clipped or taped to my chest going to a belt pack transmitter. The matching receiver resides in my bag connected to a Tascam DR-100 recorder.

Whenever I want to record, I have to turn on the transmitter, turn on the receiver, turn on the Tascam DR-100 field recorder, make sure it’s picking up sound, then hit record and go to where I need to be to start shooting.

This isn’t exactly the speediest of workflows. Removing the receiver and field recorder from the equation means that you’re wasting a lot less time when shooting by yourself. I can just start and stop the sound from the little DR-10L box on my belt.

The obvious consequential advantage to this is that I have two less devices that I need to power. Two less devices that I need to carry extra sets of backup batteries for. That means less batteries to charge, and less weight to carry. Speaking of batteries, not having to deal with things like phantom power, and superfluous hardware you’re not using, the DR-10L gets ridiculous battery life

Up to 15.5 hours on a single Lithium AAA battery, 10hrs on an Alkaline or 8 hours on Ni-MH rechargeables. My Tascam DR-100 gets nowhere near this. 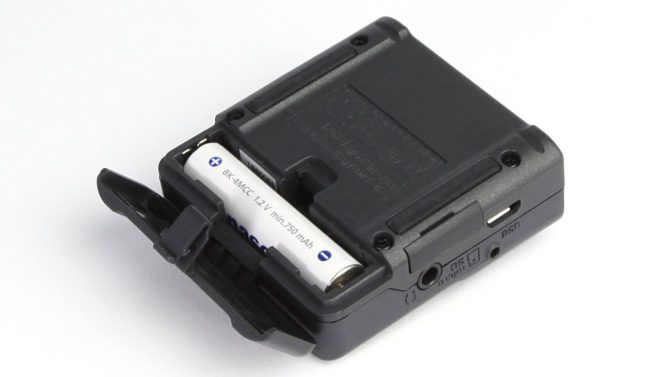 For me, shooting mostly at remote locations that are a good walk from where we’re able to park, every gram of weight saved is invaluable. So, having to carry fewer devices, that require fewer batteries, and them lasting so long, is fantastic.

As you can’t really monitor the audio while recording, as you would when having a dedicated sound guy with a separate recorder, the DR-10L records its audio at two different levels. Along with the regular track, it records another at a lower volume.

This helps to ensure you don’t have issues with clipped audio. While the DR-10L does feature a built in limiter, they’re not always perfect, especially with very loud short bursts of sound. So, if you do run into clipping issues with the main track, you have a handy backup from which you can pull sound.

Recording your audio separately isn’t for everyone. If you’re a vlogger, for example, and you don’t want to have to sync separate video and audio in post, then something like the Rode VideoMic Pro might be just what you need. But, if you want to get the reliability and consistency that a lav can offer with minimal gear, this looks to be an ideal option. You will need to sync up in post, though.

Switching from wired lav mics and boomed shotgun mics to wireless lavs has made my life much easier. Wireless lav mics with a receiver going into the DR-100 is still the way I’ll go for some projects. I’ll also stick with boomed shotgun mics for some projects, too. But, for short personal videos and behind the scenes at photo shoots, I could easily see the DR-10L becoming my go to device for capturing my own voice.

One thing that would be nice feature for a future version, though, is if it had a pass through microphone output. That way, if you did ever need wireless, but still wanted to use the DR-10L as a backup recorder on the subject, you could go from the DR-10L to a regular belt pack transmitter.

Such a feature could become very handy when speaking at an event, for example, and you want to record your own voice, but still need to transmit to a main desk to mix with other audio or play over speakers. For now, I guess you’d just have to have two lavs mounted to your chest.

The Tascam DR-10L is available for preorder now at $169.99 and is expected to start shipping on November 1st.

What types of microphone do you use for video? What sorts of videos are you making with them? Is the DR-10L a suitable replacement for your existing wireless lav setups? Is the benefit of a quality sound recording worth the inconvenience of having go sync it up with you footage in post for what you shoot? Let us know what you think in the comments.