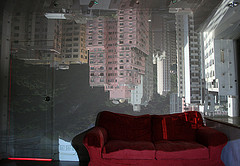 Going back to the old days where digital was not even heard of and 35mm might have been a related kin of the .45″. Yet they took pictures. They did is using Camera Obscura (Dark Chamber).

The basic pinhole is a really simple – it is a shoe box with a small hole on one end and a sheet of sketching paper on the other end. In fact is it so simple that some scientists speculate that it was the first evolutionary step for the (infinitely complex) human eye.

You can start small with a pinhole camera the size of a match box. Nice, but small.

A lightly bigger (and digital) version was introduced by Rich Legg as a  great science project for his (now featured on twilight add) daughter.

Taking It To The Next Level

But… can this concept be taken to the next level? You bet!

How about a meter by meter big pinhole camera? Piece of cake – provided you can find film big enough. Just use that crate you got in the basement. What?!!? No film? Ok forget about film. Just use sketching paper (which you can capture digitally – see Rich’s project just a second ago).

How about a room sized pinhole camera? (Yea, really, see the image on the top of this post by Nick :)).

OK, if I had a penny for each time I heard that, I’d be 2 penny richer. But seriously – you will need a room. Here is what you should look for:

– Room with nice view – preferably to a sunny location

– It would be nice if the room was square.

– It is best of the wall opposite from the window is kinda empty – or at least if you could take anything off this wall.

2. Get Some Blanket, gaffers tape and foil.

Once you are in the room, turn on the light and start light proofing the room. The room should “see” no light from the outside.

This is most easily done by gaffertaping the foil on windows and door cracks. The nice thing about gaffers tape is that is goes down without a fight, so when you are tearing down the setup no residue is left.

This is why it is called pinhole. Make a hole about 1-2 cm in diameter in the foil that covers the window-with-a-view.

You should see the street view on the wall behind you. All you need to do now is to take a shot of the image on the wall.

A great video from the comments (thanks  borkmadjai)

Related Links:
– A really, really huge pinhole camera
– Some pinhole goodies from photojojo
– Pinhole on Wiki – really is you want to get down on all the scientific sheez
– Lastly, Worldwide Pinhole Photography Day is coming tomorrow – have fun.