Not too long ago, I have posted an article about making a strobe from a disposable camera. I was soon after that I called out to the great community of DIY photographers to make a disposable ringlight from such disposable camera strobes. And why not – they are cheap, available and do not require too much power.

In my mind there were three main challenges in making this project work: 1. Chaining the camera flash units; 2. Triggering the ringflash remotely; and 3. Powering the individual flash units.

Dave Ajax (Divet) from the DIYP Instructables group has risen to the challenge. Dave was also kind enough to allow me to post the full tutorial on this site, keeping the great tradition on DIYP Instructable projects like the Time Lapse Photography project, the Ingenious Camera Stabilizer and the Muslin Backdrop project.

Build a disposable camera ring flash. Disposable cameras are discarded after the film has been removed. Photo labs often have boxes of them under the counter, waiting to be recycled. If you ask nicely, you can often get more than enough to experiment with. Try to get at least six for this project, all of the same type. 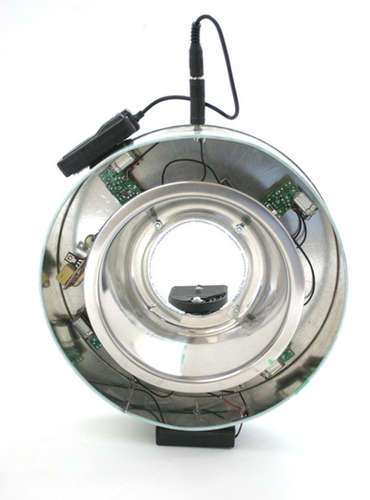 END_OF_DOCUMENT_TOKEN_TO_BE_REPLACED

Nick Wheeler the photographer who brought you the DIY Strip Light and the Floor Lit Table Top Studio is playing with card board boxes again.

Answering to strobist’s ringflash call, Nick created a simple softbox ringflash thingy that uses one strobe to create an awesome ring light effect. (If you really like ringlights, take a look at the huge ringlight collection).

If you did not visit Nick’s stream lately, you should definitely head over there. Nick has some new shots from the previous projects (strip light and floor lit studio) with great setup shots. I tell you, sometimes I don’t know whether to stare at the pictures or drool over the setup shots.

Nick has done a great job for this tutorial, packing it is great images to explain every little step. You can see how thinking of every aspect of the construction gives professional results.

END_OF_DOCUMENT_TOKEN_TO_BE_REPLACED

Part of the fun of being a DIY Photography blogger is being tapped to the great stream of ideas and creativity that flows from the photographer’s community. Every now and then I get a mail that makes my day, pointing me to an awesome/ fun/ unbelievable/ getoutofhere project. I also keep regular watch on the DIYP flickr pool to be amazed over and over with DIY projects and creative photographs of readers.

This series of articles which I call “DIYP Readers Projects” is my way to give some loving back to the community and to DIYP readers and expose some of the coolest photography projects around – your projects. The first runner up is the…

END_OF_DOCUMENT_TOKEN_TO_BE_REPLACED

I should have seen this one coming. What can you do if you have a ton of SBs and a bit of duct tape? A multi-super-sb-ring-light.

The idea is very simple – take 6 super-duper Nikon SBs and mount them on a cut coffee can. You can use duct tape to hold them on.

Connect 3 pocket wizards with splitters to the flashes and fire away.

No doubt that Joshua Targownik (check out his cool site) has a great idea, here are some of my thoughts on this great ring flash.

END_OF_DOCUMENT_TOKEN_TO_BE_REPLACED

Not so long ago, I got a mail from a reader and fellow DIYer Joris van den Heuvel. Joris referred me to his site where to my astonishment I found a ringlight heaven.

Now, I know that the photography web has been sizzling with ringlights ever since David Hobby posted his challenge for a DIY ringflash, but this guy is something else. Got some cool stuff I haven’t seen anywhere else.

Starting out with a “regular” one liner LED ring light (AKA Ring Light 1.0), Joris evolved to a two liner LED array and even a three liner. BUT WAIT!!! It gets better. CFFL tubes are yet another version of a ring flash, and…..

Joris’s latest work in progress is a fiber optics based ring light (just saying fiber optics flash makes me feel sophisticated and cool). I say – stay tuned for this one – as my friends’ say this is something completely different. You know what; check em all out here.

If you have a Technorati account and a spear minute, I’d love it if you add DIYP as a fav. You can use this link.

So, let’s see what we had here in the last month: we had a cool way of using a disposable camera and an Altoids box to make a small flash.

We also had a cool way to create a ring light (no wait actually we had two cool ways of doing that).

So, of course the question comes, what next?

In my mind the next step of evolution should be combining the two to create the first ever 25 Dollars professional ring flash.

With disposable cameras with flash costing as low as 3.50, it is simply a crime not to build such studio lighting device. END_OF_DOCUMENT_TOKEN_TO_BE_REPLACED

Reader Bankara has followed up on the cheap ringlight article with another very affordable ringlight. Not as cheap as the one you can get from your LCD, but still way cheaper then the ones you get in stores. He has posted an instructable on how to build one of those monsters babies.

One of the cool features about this particular ring light is that it is collapsible. Yap! It folds in half. Simple math brings me to the conclusion that I’ll only have to defend its existence in my home half of the time. (The other spare half will go toward explaining the wife where her living room went). END_OF_DOCUMENT_TOKEN_TO_BE_REPLACED

Reader B.Stevens has a cool idea for the cheapest most versatile ring light ever (now we have shown some ringlights before, but not that easy to make). The image on the left is using this ringlight (best viewed large). The idea is quite simple: Take a huge apple monitor. If you can get your hands on a 24 incher, you are on the right track. Tape some patterned paper on the monitor. Bring your 1.8 or 2.8 lens and your 1600ISO low noise camera and you are good to go. HEYTHEREWAITAMINUTE you said cheap. So, let me go through this method step by step and see where you can reduce your costs. END_OF_DOCUMENT_TOKEN_TO_BE_REPLACED