I know what you’re thinking. Starbucks was made so you can slowly sip your hot Lattes and cappuccino while your army of photo assistants are setting up your clever array of strobes, monolights, “kino-flo”s and LED panels.

Actually, this is all an elaborate pre-show so when they come shouting that “the sky is falling” and “how the heck are you going to find the white balance for this mix of lights” you can smile and put down your Latte.

Then you take the plastic cup of, place it on the lens and show how you cleverly created an instant Expodisc out of thin air. Ha! White Balance nailed. 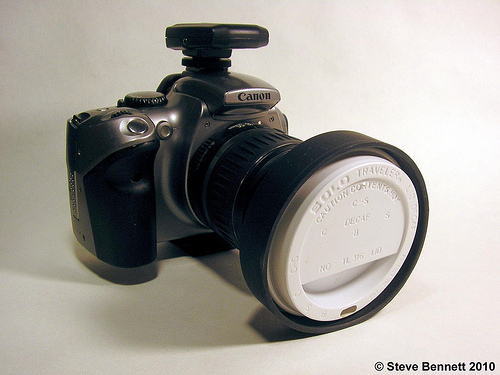 Steve Bennett‘s Starbucks Coffee Cup Emergency Expodisc, with how to instructions. (Surprisingly, the other instant Expodisc is also coffee related. I wonder if there is a great scheme here). END_OF_DOCUMENT_TOKEN_TO_BE_REPLACED

when I was your age we used to squint/half squint to measure light!

OK, I am not that old. Actually my father didn’t even take photographs beyond the average vacation on the beach photo.

Yet, there are times when you have to calculate exposure manually, or even harder, calculate flash settings. Mixing flash and ambient is no rocket science – to quote a certain DH. However, it seems that one of the issues that is hard on everyone is when to start in terms of aperture, shutter speed and flash output.

Photographer Domjan Svilkovic came up with a nifty little card that can help you do just that using the ultra highly modifiable yet super cheap YN460 strobe. I would go and say that it may be considered a printable flash meter. Seems that the low price is driving those to be very popular.

The card and instructions after the jump. END_OF_DOCUMENT_TOKEN_TO_BE_REPLACED

If you’re reading DIYP for a while you probably know that High Speed Photography is not about high shutter speeds. Au contraire. It is about shooting very long exposures in bulb mode, and using a strobe to freeze the action with a split second light.

This means that once you have a setup read to go, you turn off the lights. go back to your setup and pop the balloon / break the glass / shoot the bullet. Kinda messy and uncomfortable. Ask Edward Horsford, the exploding balloons magician.

Photographer Matt Richardson came up with a better to do it. Matt was already Using an Arduino as the triggering device for the strobe. It only made sense to Let the Arduino turn off the lights and open the camera shutter once the setup was ready.

In the video after the jump, Matt explains this concept, and shared the circuit to make this magic happen. END_OF_DOCUMENT_TOKEN_TO_BE_REPLACED

Lagging lightstands is a bummer. They don’t fit in the bag. They are hard and pointy, and in general they create traction. Lots of traction. If you are just going Bazooka with one stand this is OK. But if you have to carry a few of them… Darn!.

Photographer Peter Miesch was dealing with the same issue and came up with a wonderful lightstand carrying system bag much like the Standbagger that puts an end to the photographer’s assistant misery. Of course, if you are like me and you are your own assistant, than the solution is even more wonderful. This project requires some sewing skills, so if words like zigzag stitch and bobbin make you go AUH? ask your grandma for help. END_OF_DOCUMENT_TOKEN_TO_BE_REPLACED

I am not surprised that the YN460II strobe is gaining popularity with a price tag around $60 (or even less if you’re an eBay kinda person) those flashes are pretty attractive.

They cheap price also make them a good candidate for modifications as it helps removing the fear of nuking them in the process. See for example the TV contorl remote for the YN460 we featured a while back.

We’ve had our share of dual strobe mounts before, but this is a first for a triple mount. And you’d need every bit of that light if you are shooting a big modifier like the Westcott’s 28″ Apollo monster.

This tutorial shows you how to make one (or print it out and go to the local shop so they make one).

The detailed instructions were written by Eric Au (Flickr), Calgary based photographer and industrial designer. Always helps to have a Shop at the garage… I wonder how many comments will persuade Eric to go and make this into something you could buy at B&H.

Traditionally, during this time of year, there is a lull in work flow. Not a lot of contracts are signed during late September and October. Things pick up again in November. Typically, I use this time to hone some new technique or try out some new gear. A tiny bit of hackground (pun intended) for you readers, I am photographer and an industrial designer and it was inevitable when those two would collide. I’ve been hacking and developing my own brackets and equipment ever since I could hold a saw.

I use a lot of off camera flash for location work, I sought out to design and develop something that is the size of a palm, but have every feature and the strength of the Lightware Foursquare. Although I currently own and use a Foursquare, it is still not compact enough to throw into my bag (taking into account the handle assembly which makes it work really well).

Instead of trying to copy and reduce the size of a Foursquare, I decided to subtract some light, using 3 instead of 4 Speedlights (I use only Nikon Sb800s). I started with the largest hex, t6160 aluminum I could source locally, 2”. A piece of hex stock offered 6 open, flat sides to mill into features to mount the flashes, the spigot and umbrella thumb screw. END_OF_DOCUMENT_TOKEN_TO_BE_REPLACED

The cardboard light tent is a constantly popular post here at DIYP, and no wonder it is one of the easiest ways for shoot a small product [note to self, make a really huge cardboard tent].

However, it is not the only way to create good small scale product setups. A while back David Hobby had a great derivative of that box which he titled the lunch box.

With Halloween just around the corner I thought that showcasing a nice scary photograph may be inspirational. Of course, since this is DIYP there’s a hack in it. It is using an optically triggered hacked slave flash that was fitted in a Lantern.

The following post about creating a polycarbonate panoramic head was written by Barry Young. It is a slick design that uses semi-fixed drilled holes for vertical panning and polycarbonate for an even slicker look. In Barry’s words:

Both of my DSLRs, an Olympus E1 and a Sigma SD10, are somewhat limited (by today’s standards) in the number of megapixels they churn out. That doesn’t mean that I intend to upgrade them any time soon.

Occasionally though I want to capture a particular scene in the highest resolution I can and so, like many other photographers, I too have had a go at creating my own DIY panoramic head.

As you can see it is very much like many others you will find on the net, the main difference being that it is made of 12mm transparent polycarbonate, which makes it look slightly different from the norm. END_OF_DOCUMENT_TOKEN_TO_BE_REPLACED

Steve Hermitage who made it a point to create and share wonderful photography home projects, like the bubble world that was featured here before, just released another great weekend project. So if he forecast is rainy and it looks like you are about to stay home. Get a bottle of wine and two glasses. one for you and one for the camera. Here is one fun project for this weekend.

Using a computer screen Steve created simple patterns which he then uses to shoot empty glasses of wine. The way the glass breaks and distorts the light creates interesting poppy patterns. END_OF_DOCUMENT_TOKEN_TO_BE_REPLACED