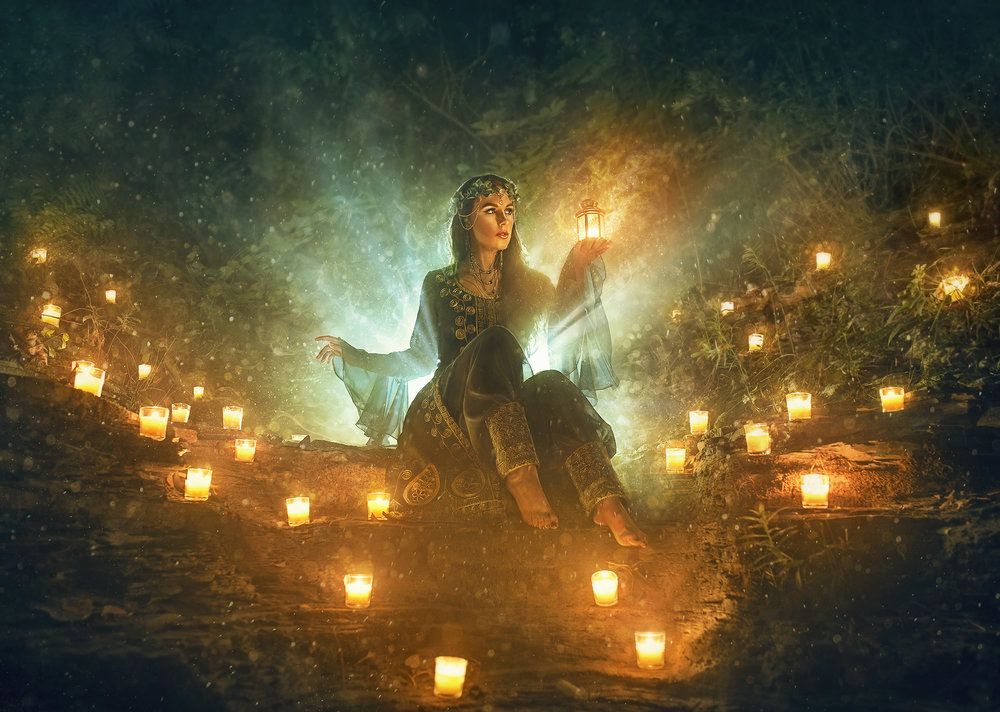 I recently hosted another large photography meet-up in Watkins Glen, New York (Aka The 2016 Watkins Glen Flickr Gathering Aka #WGFG2016 Aka the greatest weekend ever to happen anywhere ever.) … And by large I mean there were 30 of us. I hosted a meet up last year (you can read about that here and/or here), and even though it was a crazy amount of work to put together and ate into much of my could-be-editing-photos-time, I just couldn’t stop myself from making it happen again this year. What a truly wonderful weekend it turned out to be. I could go on and on (and on) for hours (AND HOURS) about how completely amazing this group of photographers is and how much I absolutely love them to freakin pieces and cherish every moment we get to be silly, crazy, artsy, ridiculous, and entirely magical together. These are the times I look forward to most, the times that charge my creative batteries like nothing else. 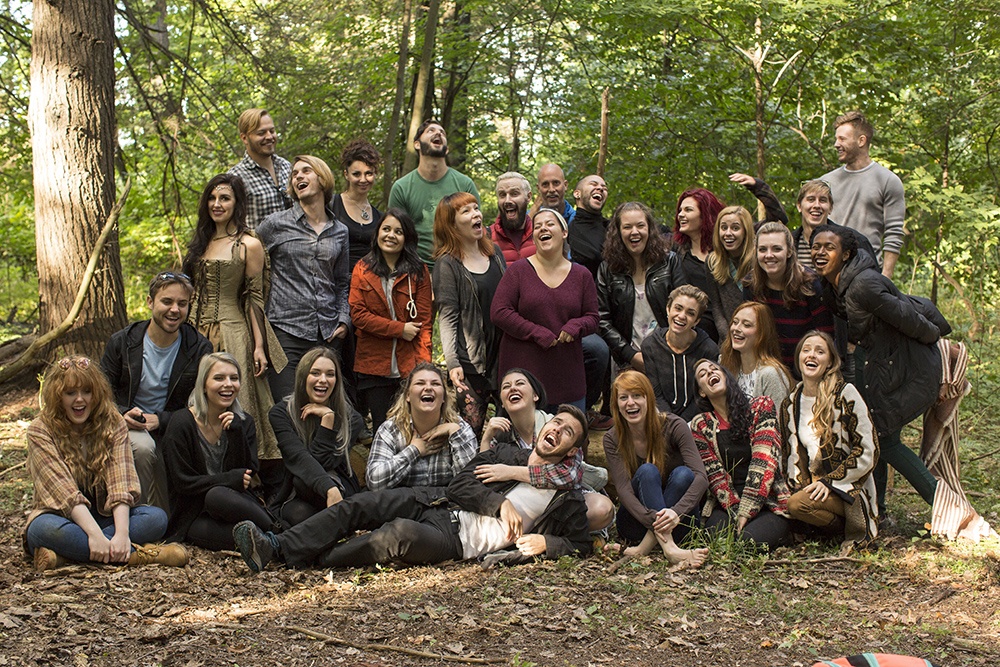 Over the span of just 4 gorgeous September days (only three days of actual shooting), I shot about 16 different concepts – All of which I’m so over the moon excited about, but one of those shoots definitely rose to the top of my brain-excitement-meter. (HINT: Umm, it’s the one I’m writing about that you just saw at the top of this post.) One of the photographers in attendance, Jess Rohl, had recently done a shoot where she used a ton of candles. So like any good little Flickr gathering attendee would, she brought them along to see if anyone wanted to shoot with them, and someone did … It was me … 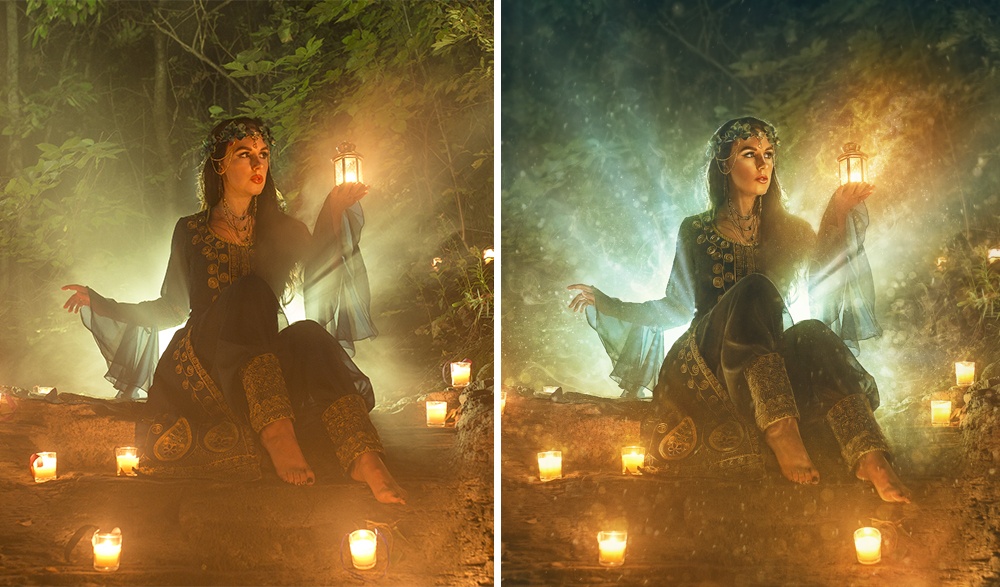 Because of the large number of fantastical humans at the gathering, I ended up having to rent two vacation homes in order to fit everyone. One of the houses was a lakefront property (you’ll be seeing some concepts I shot there at some point down the road), and the other house had its own waterfall!! Well … it was supposed to, at least (hahaha). It didn’t have a waterfallper-say, but it did have a very dry creek-bed that I’m sure is a lovely waterfall when it actually has water to, you know … fall. I was thinking it would be cool to frame up a shot with someone sitting in the center of the top of one of the “falls.” So we scooped up Jess’s big-bag-o-candles and set off to make some art in the dark! 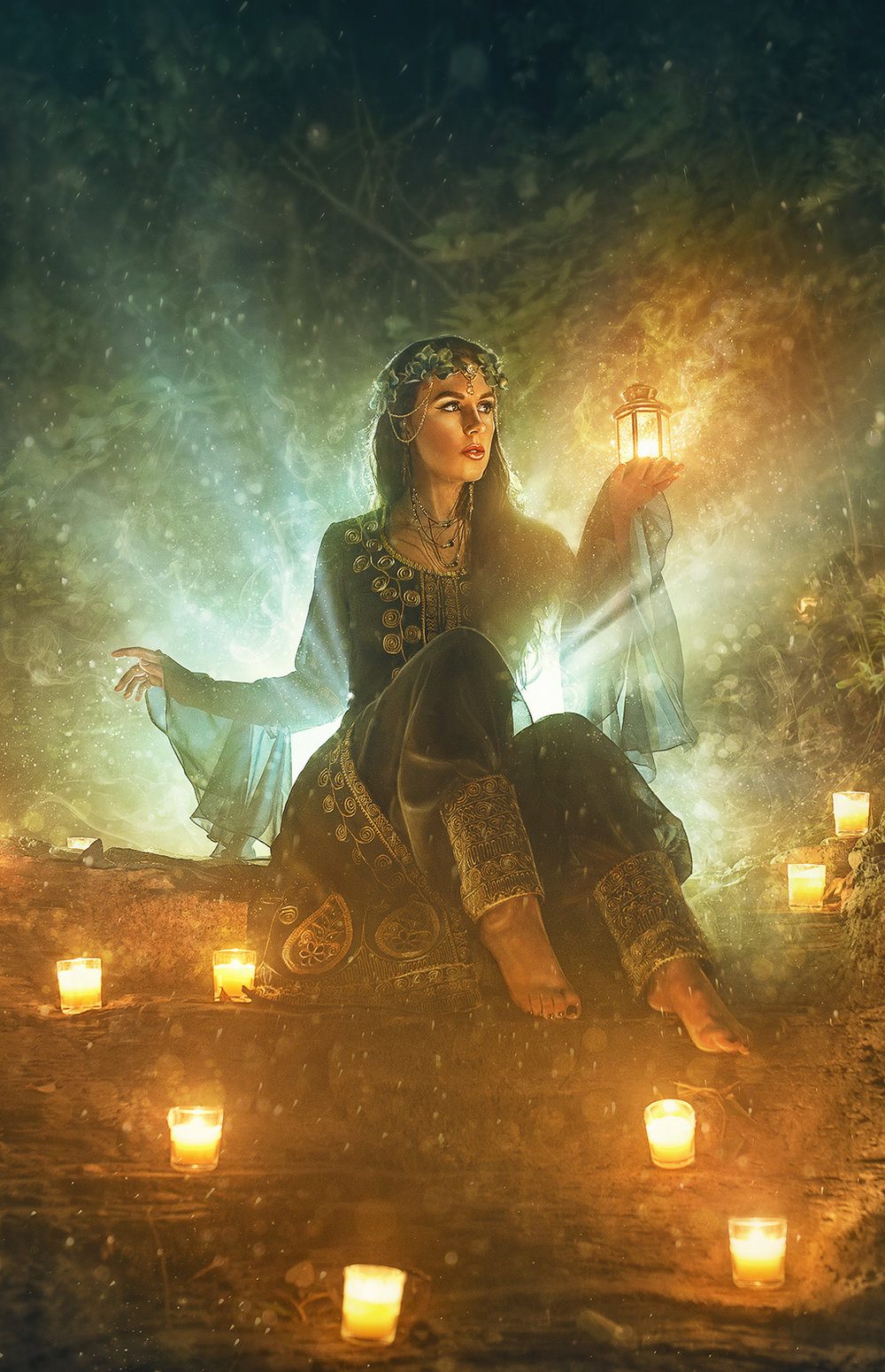 My cousin James is engaged to Kara Markley, who happens to be an absolutely incredible model/all around wonderful person. I had the pleasure of shooting with James and Kara once before and I’ve already gone into some detail about both of these special humans in this post, so I won’t repeat myself too much. Anyway, Kara had this really interesting, very intricately-detailed outfit from Reminisce Shoppe (whom she and James shoot/model for all the time), and the Shoppe didn’t have a concept piece created for it yet. SO I decided to take on the challenge and plop her into my magical-candlelit-nighttime-wonderland. 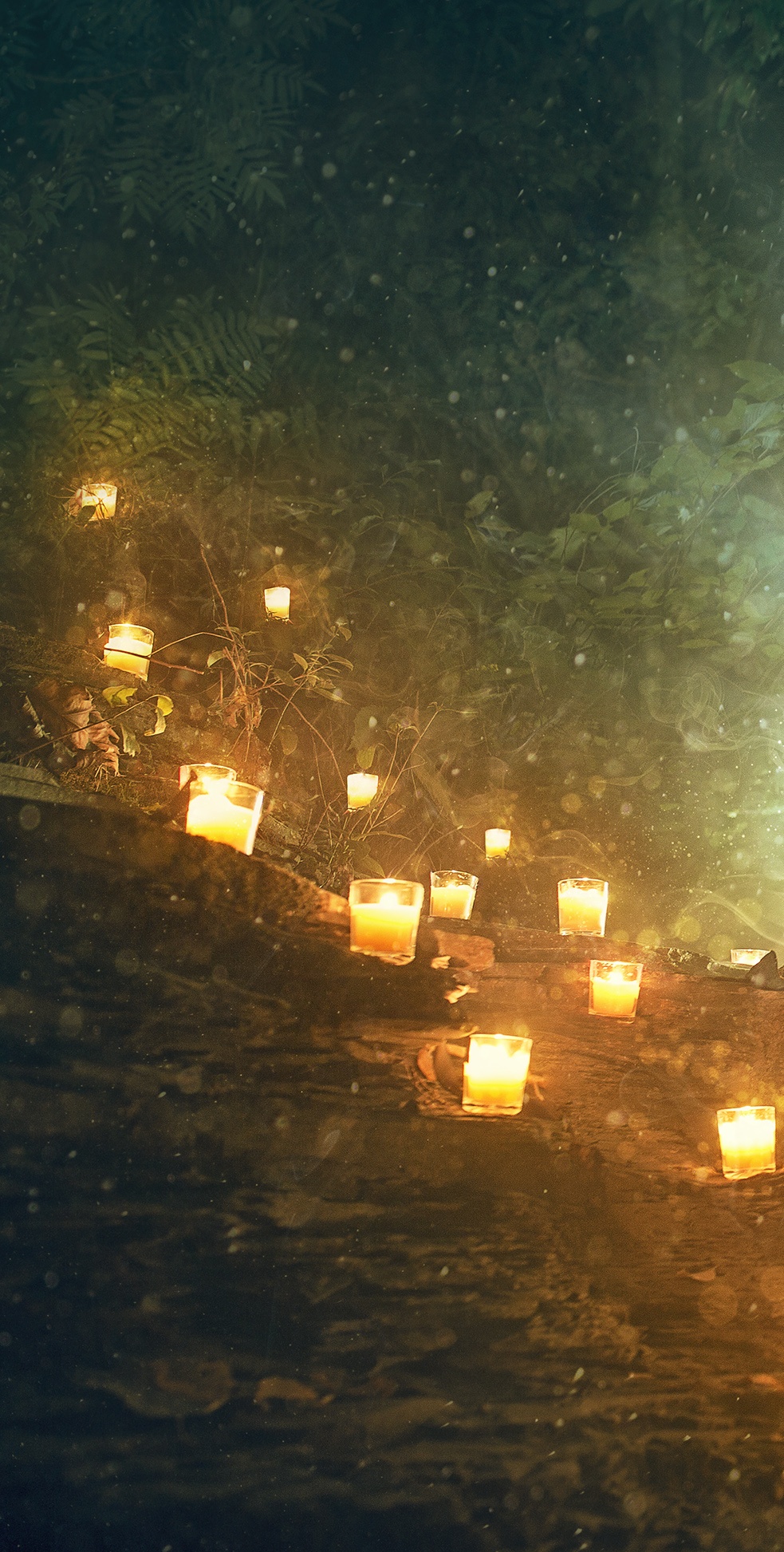 I’m the first person to say that I totally LOVE studio lighting. I crave a few hours spent in a dark studio tinkering around with big-expensive-flash-photography-toys as much as the next guy. Probably more than half of my portfolio was shot in the studio with multiple huge flash banks and other fancy lighting tools and modifiers. I wonder if (slash secretly hope) some photographers out there see this image and think something like, “This is so cool, but I can’t afford all of that snazzy flash lighting stuff.” Or that some photographer who’s stuck in their old ways, thinking you can only get good images with expensive lights, will see the image and say, “See look what a stunning image you can create with some good lighting equipment …” Well, this image is a testament that with a little creativity, a good group of friends, a bag of candles, and …. some cell phone flashlights … you can accomplish something truly magical!

As much as this photo is my own creation, it was majorly a team effort. Firstly, since I was wedged halfway down a waterfall (well, a nothingfall) right at the edge of a bit of a drop-off … but let’s not talk about that haha, I had Jess scrambling around placing candles for me …. “Nope not that one, that one, yeah that little dude, move him about four inches to the left … sorry my left, ok now back an inch, yeah right there … now grab that guy two to the left … “ and so on. (Apparently most of these candles were boys…?)  Meanwhile I had Jeff Padgett laying on the ground behind Kara setting off smoke bombs and then shining a cell phone light towards the camera to backlight the smoke. (Thanks Madeline for donating some smoke bombs to this project!!)

I also had Sarah Neiman, Valerie Kasinski, Victoria Stever, James, and again Jess all holding various cell phone lights in different places. Plus Shelby Robinson had a phone for a bit, but then it got passed to someone else. It was kind of a cluster of people, phones, candles, and darkness, in the best sort of way. Apparently by the end it seemed that everyone had someone else’s phone, because I kept asking for light to be shined in different places and they would pass the phone to the next person through the bushes. By the time I was happy with the lighting, I had Sarah halfway up the right bank in a bush and Valerie wound up double-fisting phones like a boss. Oh and a handful of other amazing photo friends were lurking in and out of the brush as well – Katie Elster was there for a time, but she had to head to the house on a very important mission to find cheese balls. (PRO TIP: No meet up is truly complete without a huge tub of those nuclear orange cheese balls!)

I shot this image on a Canon 5d Mark III with a 35mm lens. As far as camera settings go, I tried a few different things to get the shot I wanted before I landed on these …. 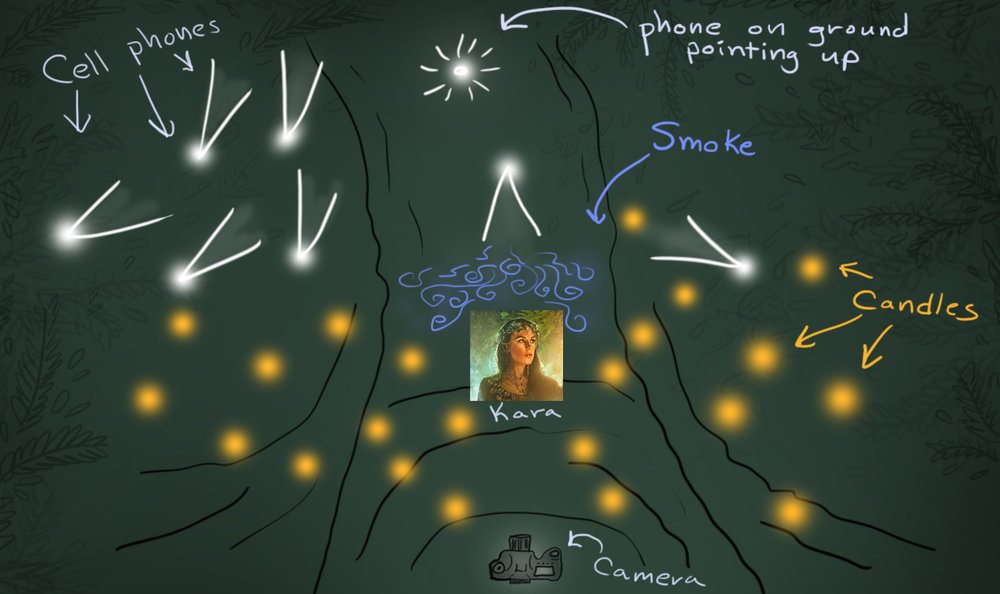 Please enjoy this overhead view of my “lighting set up.” This should hopefully give you a feel for where I had my human tripods/lights.

Once everything was set and I was finished asking different people to shine their lights on different parts of the background, I had Jeff light the next smoke bomb and then asked Kara to freeze as best as she could. Which turns out was really super well. Almost every single shot was in focus (thank God) and had basically no motion blur! (Double thanks!) It just goes to show you what working with a great model can do for a picture. I did wind up combining three different captures to get the final look I wanted: one main image, one for the face/head tilt I liked, and one for the hand holding the light, mostly because of the awesome light beams creeping out from behind her through the smoke in that image.

I don’t think I have ever captured this much of my final image in camera before. I’m so used to shooting composites in the studio where I only shoot a person on a blank background. Even when I do photograph on location, I know what I’m capturing in camera is nothing compared to what it will look like once I add a ton of crazy stuff in Photoshop. But this shoot, this picture taken using only some cheap candles and the phones we carry around in our pockets all day, came right out of camera looking pretty dang printable! Obviously because I’m a Photoshop addict I had to jazz it up a bit with some particles, color editing, extra smoke, digital painting and whatnot, but I am so very proud of the image that my friends helped me bring to life. So next time you’re thinking you can’t afford the equipment to make really impressive images, just remember there is probably a light chillin in your pocket right now just waiting to shine a little light on something magical!

You might be sick of me saying this, but tough – I’m gonna say it again and probably in every other new post for the rest of forever. I love the Raw Exchange store and as per usual used several elements from the store while creating this image. You can purchase the particle textures here. Some of the smoke textures here. And the completely fantastic ridiculously handy bokeh/sparkle/particle/magical Photoshop brushes here.

In photography, “Master and Slave” flashes is lazy language. We can do better.
« This is why your camera shoots 29.97fps (not 30fps) and why it doesn’t really matter any more
Get your GoPro airborne by shoving it into a giant Nerf football and throwing it »