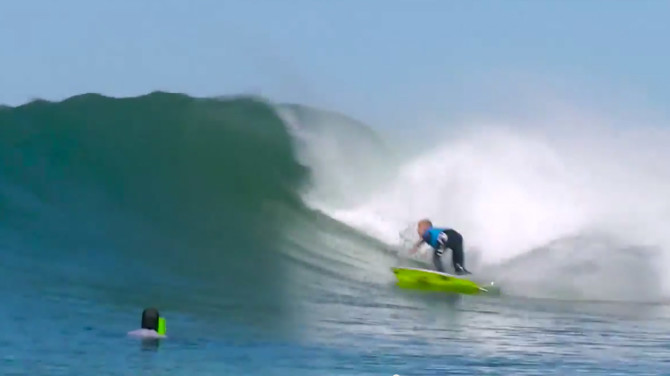 Fanning being photographed earlier in the competition.

Unless you’ve been living under a rock, you’ve probably seen the insane footage of professional surfer, Mick Fanning’s recent encounter with a great white shark. The encounter occurred during the finals of the J-Bay Open, a surf competition that takes place in South Africa. While waiting for his next wave, Fanning had an unwelcome visit from a great white shark, which he says become tangled in the leash which ties the surfboard to the surfers ankle. A pair of jet-ski’s and a safety boat immediately made their way to the surfer, who miraculously survived the encounter without a scratch.

Of course, the incredible story swept the headlines, and a week later is still making waves among the news circuit. It comes as no surprise the bulk of the media attention was placed on Fanning–if he wasn’t a legend among surfers before, he certainly is now; however, there was another man in the water that day who had a very unique perspective of the incident. Kelly Cestari, the official event photographer, had just swam out to the lineup about 30 minutes before the ordeal took place.

In an interview with the World Surf League, Cestari described how the shark encounter appeared from the his position in the water, near the holding area for the safety boats. At first, Cestari says he wasn’t fully aware of what was going because his eye was still in photographer mode.

At that point, Cestari turned to the boats and started shouting for them to get to the surfer as the photographer heroically waved the rescue crew past himself. “The boats and the jetskis had already taken off and were in full speed, which is their job, to get the guy in trouble,” explained Cestari. Once he knew help was on the way to Fanning, the Cestari’s mind momentarily switched back to photographer mode as he thought to himself, “Is this something I can get a photo of? Is this a photo we need? Is this something I should document?”

Then reality set in. He was alone in the water, just yards away from a where the shark was seen investigating Fanning’s surfboard…

As a professional surf photographer, Cestari has been in the water with sharks before. In fact, on a day off in the week leading up to the notorious J-Bay Open finals, he posted several photographs on Instagram of himself enjoying some time in a shark cage, photographing (you guessed it) great white sharks.

Like a true waterman, Cestari was respectful of the massive predator, making a point to tell his followers how much a bad rap sharks get. The photo descriptions mentioned things like, “Next time, blue water & no cage because sharks are not interested in eating humans.” and “I like sharks, they are miss understood [sic] and having dived with them both free diving and yesterday in a cage I still believe that.”

Ever been told a photograph can lie? It’s true. This image plays into the man eating monster theory Great White Sharks are depicted to be when the opposite is actually quite true. At no point did the shark try and get in to the cage to eat us. He was being inquisitive & investigating the scene but not calculating how to get a human meal. At no point did I fear for my life unlike some of the day to day happenings we find ourselves in … But I do like this photo. #shark #greatwhite #apexpredator #predator #bigfish #toothygrin #smile #cage #humanzoo #lexar #lexarmemory #delmarhousingprojects #brotherhousings #1dx

At the time, Cestari had no idea it would only be days later when he could put those convictions to test…

As Cestari floated in the surf, having just witnessed a close encounter between surfer and shark,  trying to decide whether or not he should be taking photographs, the realization came that the jetski’s and rescue team were not coming back for him.

“I actually hung around for like maybe a minute thinking the jet-skis would come back to me. Once I realized they were going in, it was time for me to swim in.”

The photographer remained calm as he slowly swam the 50 meters back to the shore. He recalls fellow event photographer, Kirstin Scholtz, screaming at him from the shore as she watched him take what appeared to be “a casual swim” back in.

“All I can remember is that I didn’t want to cause too much splash, catching the swells as I was coming in…by the time I got to shore I was thinking, ‘I’m ok. I’m safe. I’m fine.’ Thankfully everyone else was as well.”

Both Cestari and Scholtz have some heartwarming photos from the J-Bay Open taken after everyone had safely made it back to shore, you can check them out on their Instagram accounts by clicking here for Cestari’s and here for Scholtz’s.