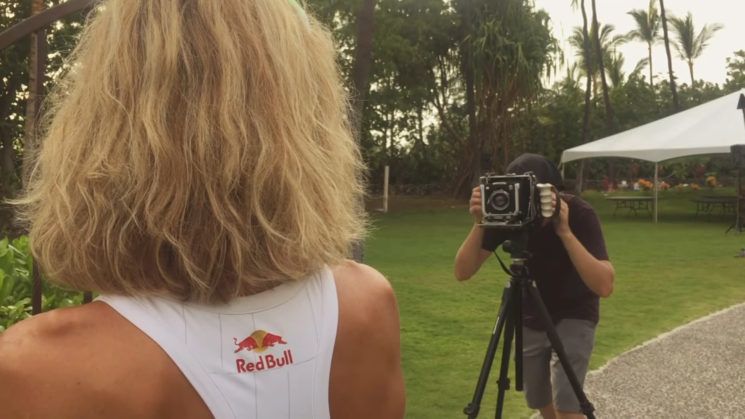 The Ironman Kona Championship is one of the toughest races on the planet. With over 200km of swimming, cycling and running, it’s pretty challenging. The strong wind, lava, and high temperatures add extra risks. Some people just like to really push themselves, I suppose. The same is true of photographers. Like Czech photographer Dan Vojtech.

Working with Red Bull Photography, Dan chose to photograph the Kona event with a large format Polaroid camera, and the results are quite intriguing. Dan shot the Polaroid camera alongside a Nikon D810 with 24-70mm f/2.8 lens to confirm lighting and exposure. He tried to create the exact framing between the two cameras at the same distance for comparisons.

Dan faced several challenges throughout the project. There’s the size and weight of large format gear for a start. Hawaii’s also pretty hot and humid. In fact, the humidity even threatened the whole project. Along with the heat, it resulted in a lot of fogged up lenses, and even affected mechanical parts in the old large format camera.

For a single shoot that would be a lot of work, but Dan was photographing 9 competitors during the race. With minimal time during their prep phase, Dan only had the opportunity to take one shot. From composing to developing and fixing a single shot could take up to 18 minutes. Your subject’s already left before you’ve even seen it.

It’s an interesting project, and the animated gifs showing the transitions between the two shots is pretty cool. It’s difficult to say which is “best” as it’s all really subjective. Personal preference. But, I’m still kinda leaning toward the Polaroid myself.

You can find out more about the project on Dan’s website or at Red Bull Photography.

How about you? Which were your favourite shots in the project? do you prefer the Polaroids over the more modern DSLR? Do you still shoot Polaroids? Only Polaroids? or digital, too? Let us know what you think in the comments.