Sony, is not waiting to see who will win the sensor wars, it is defining the battlefield. With rumors of new technologies being around for a while now, Sony recently released two videos showing what’s in store for their future line of sensor technology.

Specifically, Sony demoed Starvis – an ultra low light technology designed for security cameras, though with the current low light / high ISO specs battle, it would not be surprising to find traces of this technology in their consumer line as well.

The STARVIS is back-illuminated pixel technology used in CMOS image sensors for surveillance camera applications. It features a sensitivity of 2000 mV or more per 1 µm2 (color product, when imaging with a 706 cd/m2 light source, F5.6 in 1 s accumulation equivalent), and realizes high picture quality in the visible-light and near infrared light regions

The other technology shared is called Pregius, and is a global shutter mechanism for CMOS sensors. Global shutter is a mechanism by which an image is scanned in “one shot” by the sensor, rather than line by line, eliminating blur and the notorious Jello effect (here is a full explanation on rolling shutter vs global shutter).  And here is a quick demo on both types:

Here is how two moving objects will look when shot with Pregius vs a rolling shutter: 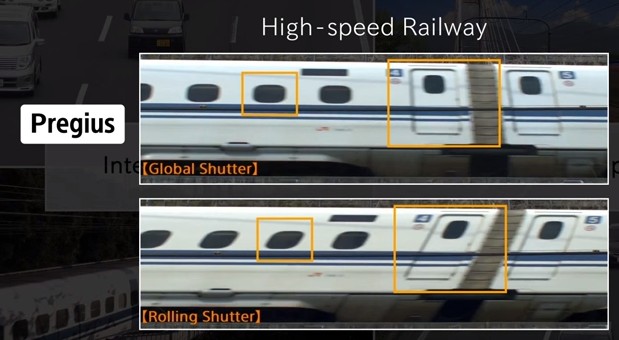 According to Sony (bolding mine):

In industrial applications there is often a demand to recognize the accurate form of fast-moving objects.
Until now, a rolling shutter has been used as the electronic shutter mechanism in CMOS image sensors;
therefore, unavoidable intrinsic distortion of the focal plane occurs.
Sony has incorporated Pregius, a global shutter function, into the CMOS image sensor to meet customer needs

This could be a real breakthrough in sensor technology as global shutter was only reserved to the more expensive to produce CCD sensors.

On both technologies, Sony notes that they are industrial in nature, but it would not be unreasonable to expect proliferation of these technologies its consumer business units. And for all you non Sony photographers, this will most likely have impact on all camera makes, as many camera makers are using Sony sensors in their bodies. And if not, they will definitely have to compete with the features that Sony releases.

« 3 Unexpected Brand Wars On The 2015 Battlefield
Just NO! Photographers Stuff Styrofoam into Fish to Bait Eagle For Better Photos »