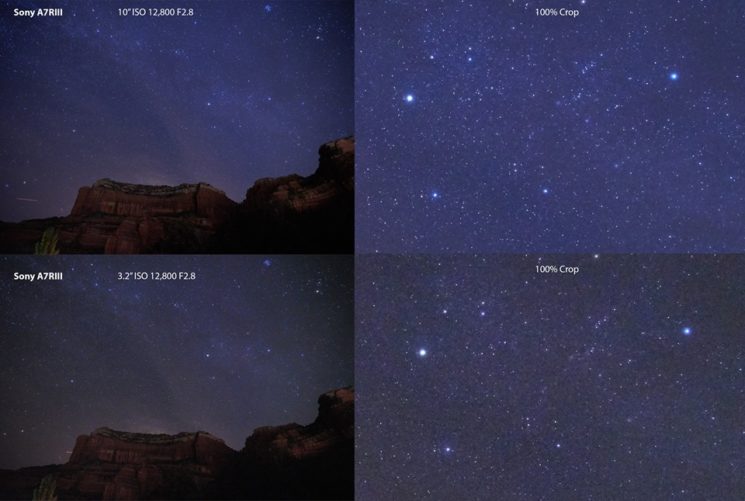 If you are an astrophotographer, then you may be familiar with the so-called “Star Eater” problem of Sony a7R II. The noise reduction algorithm of the camera mistakes sharp pinpoint stars for noise, so it deletes them from photos or reduces their brightness. But after open letters and complaints from astrophotographers – Sony seems to have fixed the issue in the new a7R III.

Photographer Drew Geraci shared the good news with the community. He posted the comparison images of stars, shot with the full production model of the a7RIII. The first photos were taken at 3.2″ and 10” at ISO 12,800 with the Sony 16-35mm GM lens.

Later on, at the request of some users, Drew tested the camera in Bulb mode, at 2,5 and 5 seconds. You can download these RAW photos from this link and compare them (the password is “star”).

Although Drew’s test shots show the improvement over the previous model, Mark Shelley provided a deeper analysis of the 10s image. He points out this photo may not be reliable for the test. A crop shows that there’s some trailing of the stars, so the “Star Eater” doesn’t recognize them as noise. Still, the images in Bulb mode look good, both at 2,5 and 5 seconds.

So far, the new Sony a7R III has been mainly praised for its 10fps continuous shooting and great AF capabilities. But after these test images, it seems they’ve resolved a major problem astrophotographers had with this camera. So, it may be a deal-breaker for them when it comes to upgrading. We need a few more tests to make sure, but for now, the test shots show that Sony a7R III won’t “eat the stars.”