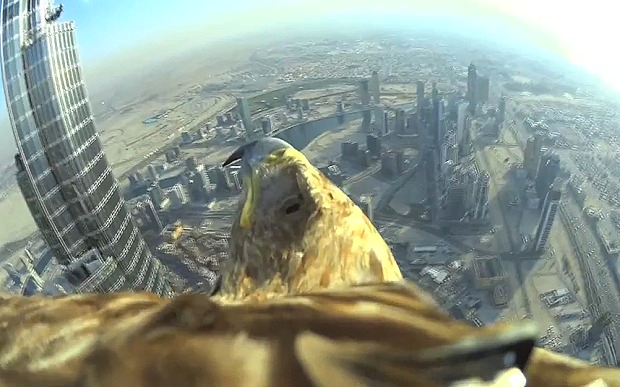 Conservation movement Freedom Conservation successfully set a new world record for the highest recorded bird flight from a man-made structure, with the help of an Imperial Eagle called Darshan.

The flight, starting at the roof of the Burj Khalifa, was documented by attaching a Sony 4K Action Cam to the eagle.

Hoping to raise awareness of the plight of threatened wildlife, the group’s eagles have flown from several iconic landmarks in the past such as the Eiffel Tower in Paris and London’s St. Paul’s Cathedral.

Freedom Conservation did not aim to just draw attention to their group, but also specifically to Imperial Eagles:

“Darshan the Eagle, who has set the new world record, is an example of a threatened species, which has been successfully rehabilitated through global conservation programmes. He acts as an ambassador for threatened animals all over the world. The Imperial Eagle, once on the Red List of endangered species, has been saved from extinction”.

According to Freedom Conservation’s falconer, Jacques-Olivier Travers, the flight was an incredible challenge due it being the highest vertical flight, as well as the strong wind disturbances caused by the many skyscrapers.

“This flight will create huge possibilities for future conservation programs. Training and equipping birds of prey with these small cameras will allow us to understand exactly what a bird does when it is released into the wild, and will ultimately help our effort to restore endangered bird populations”.

“Today represents a historic opportunity for conservation – through these incredible images we are bringing this important cause to the attention of people all across the world”, added Freedom Conservation Director and Co-Founder Ronald Menzel.

Watch a bit of the preparation in the video below:

A longer version of the flight, along with commentary and explanation can be seen here:

This record is sure to last for a while as Darshan flew from the world’s tallest building, the Burj Khailfa in Dubai, which stands 829.8 meters (2722 feet) tall.

This campaign joins several other breathtaking projects to have come out of Dubai recently such as the 8-terapixel 360-degree virtual tour and Rob Whitworth’s flow motion video.

This record-breaking camera can zoom in 100 million times

« Use Nikon’s Lens Simulator to Pick Your Next Lens (Non-Nikon Shooters Too!)
Handy Website Lets You Check Amazon Prices Around The World For Better Deals On Photo Gear »