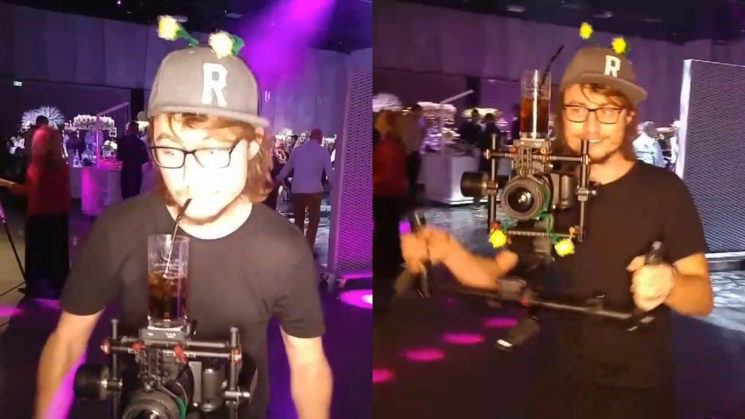 Shooting video in hot sweaty dance clubs is thirsty work. But one ambitious young filmmaker has managed to solve that problem. Using his DJI Ronin upside-down, Israeli photographer and filmmaker Oleg Balzanov manages to keep refreshed while he films and dances.

It’s not a new idea, but it is the first time I’ve ever actually seen anybody pull it off in the real world. After posting the video to Facebook, it’s proving to be quite popular. I do wish it had lasted just a few seconds longer, though, to see what happened at the end. It looks like somebody was just about to bump into him. Now that really would be a stabilisation test!

Whenever I hear of somebody wanting to try this, it’s usually because they’ve seen this video from Hahn. Of course, this video’s a fake, using a regular Manfrotto magic arm and a little CG. But, it’s a commercial, would you expect any less?

People have tried to copy this advert in the real world before, though, with expensive and spectacularly disastrous results.

I’m not sure it’s something I’d want to risk myself. No matter how good the gimbal, if it’s got a camera attached to it, I won’t be placing a drink on top. One thing I do know for sure is that my trusty little Zhiyun would never be able to handle it.

Have you been tempted to try this with your gimbal? Did you actually do it? Did it work? Or did you just get your gear & gimbal wet and sticky? Tell us what you think, and if you’ve done it, show off your video, in the comments.