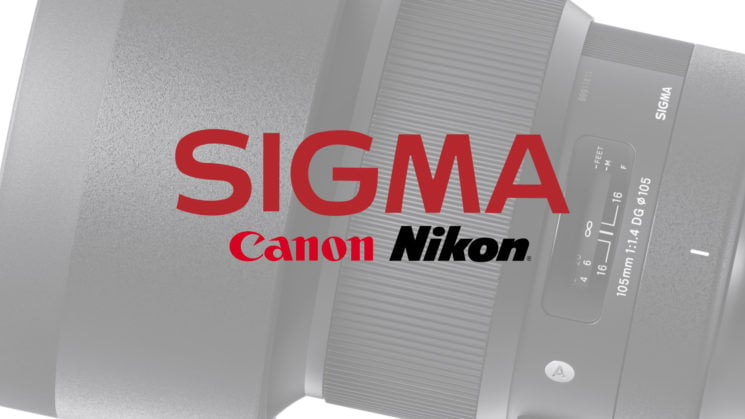 The new Z and RF mounts on the Nikon Z6/7 and Canon EOS R have been a big deal for a lot of people contemplating making the switch. This is especially true for owners of F or EF mount Sigma Art, Contemporary and Sport Series lenses.

Sigma has now done some more testing and updated the compatibility lists for both cameras using the Nikon Z to F & Canon RF to EF lens mount adapters. There are also some notes when using specific older model lenses.

The Sigma release lists a whole lot of lenses for both brands, but first up, Nikon.

We would like to share results of our further investigations regarding the operating conditions of the Nikon “Z7” and SIGMA’s interchangeable lenses for Nikon mount.

When SIGMA’s interchangeable lenses in the current product lineup, listed below, are used in combination with the Nikon “Z7” and their “Mount Adapter FTZ”, both AF and AE operate without any issues.

Furthermore, lenses which incorporate Optical Stabilizer (OS) will work to maximum effect when both the lens’s OS and the in-camera stabilization are switched on simultaneously.

[Phenomenon]- It may occasionally stop recording while shooting video. It is planned to be resolved by a firmware update.

[Phenomenon] – When starting to shoot with the subject completely out of focus, the response to the AF operation is intermittent. It is necessary to release several times or to turn the focus ring once to release. It is planned to be resolved by a firmware update.

[Phenomenon] – It may occasionally show overexposure when narrowing down the aperture from F5.6 while shooting. It is planned to be resolved by a firmware update.

[Phenomenon] – Please focus using MF, since it is difficult to achieve sufficient focusing accuracy. There is no plan for a firmware update.

When the lenses listed below are used, due to product specifications, the in-camera stabilization cannot be turned off. In addition, the Auto Power Off function cannot be used. Please manually turn the power [OFF] after shooting.

We have previously confirmed that some phenomena such as AF not working correctly with some lenses released or shipped from SIGMA before November, 2013, when they are used on Nikon’s digital SLR cameras incorporating the latest firmware. Under this circumstance, we will update the lens firmware free of charge. If the products do not operate on a Z7, even when they are listed above, the lens firmware update may improve the situation.

For customers who have these applicable products, please contact your nearest authorized SIGMA subsidiary / distributor for further details.

*1 For products of which firmware was updated after November, 2013, a firmware update is not necessary.
*2 It is not possible to update the firmware of products for which our support period has finished.
*3 For products with an engraved edition number of A012, C013 or S013, the lens firmware can be updated using the optional SIGMA USB DOCK.

So, some lenses will have issues, some will be updated via firmware, and some won’t have a firmware upgrade option, so you’ll just have to learn to live with any potential workflow adjustments in those cases. And for some of the older (Pre-2013) lenses, you may have to send the lens off to Sigma to have them do the update for you, as they’re not compatible with the Sigma dock.

The Canon list isn’t quite as extensive and doesn’t look at anything outside of the Art, Contemporary or Sports series models. And there are some caveats, such as disabling the Digital Lens Optimizer within the Lens Aberration Correction features.

We would like to announce that, as of this moment SIGMA’s interchangeable lenses for Canon mount in the current lineup do not have any issues with general operation when they are used on the “EOS R”, released by Canon Inc., via their “Mount Adapter EF-EOS R”.

In addition, please note the information below when using our lenses.

When the Digital Lens Optimizer is switched [OFF], but “Peripheral illumination correction”, “Chromatic aberration correction” and “Distortion correction”, located within the in-camera Lens Aberration Correction function is switched [ON], the appropriate corrections can be achieved in accordance with the optical characteristics of each lens. This is applicable to lenses listed below which were released after March, 2018, or those of which firmware has been updated to Ver.2.0 or later.

* These lenses will be compatible with the in-camera Lens Aberration Correction function by a firmware update to Ver.2.0 which will be announced in the future.

We will continue verification and provide updates on the operating condition at a later date.

Sigma is constantly expanding this compatibility list as they’re testing more of their lineup, so if you’ve got an older EF mount Sigma lens that isn’t already mentioned above, you may still see it pop up on the list at some point.