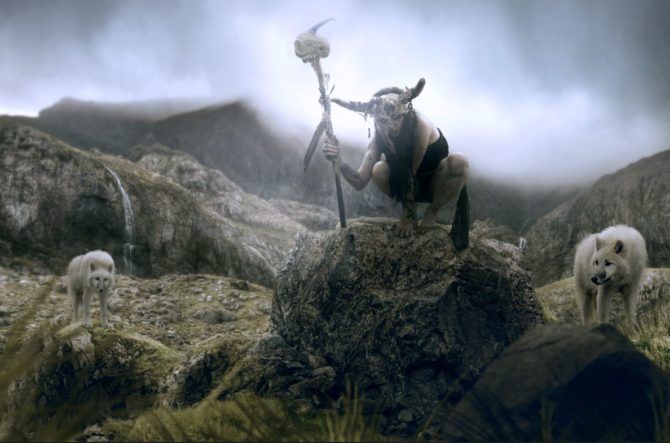 One day whilst I was sprinting my heart out on the running machine at the gym, an image popped into my head. The scene was a tribal/witch doctor lady, surrounded by wolves. I wrote it down on a scrap of paper when I got home, and threw it into my ideas folder. It was around 6 months later, after finishing some client work, that I thought it was time to create some personal images and flex the old Photoshop muscles. The first piece of paper I picked up was the witch doctor idea. Knowing it would make a cool image, and challenge me, this is the project I would choose.

Because of the style of the image, I wanted  a cool looking mask and staff. I didn’t want to Photoshop these, I wanted them to be real life props. In my opinion that usually looks better. So I got in touch with Shortie Props. The time frame was small, so I needed the turnaround to be quick, and Shortie didn’t let me down. He created a mask and staff within 2 weeks, both which you can see being used in the final image. 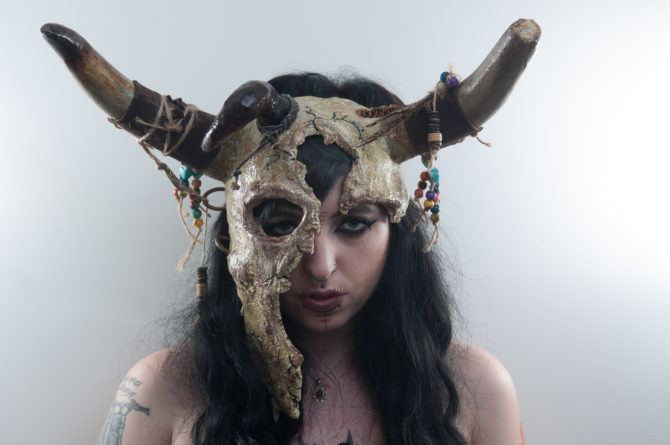 With the props now secured, I arranged a model. Having drawn some rough sketches out, I planned for the model to be propped on something, as she would be on a rock in the final image. Knowing too that I had to mimic natural light coming from behind, I decided the best course of action was to shoot two bare flash behind the model. Backwards, up and towards the wall. The light would hit the wall, and fall back down just like the natural light would fall.

Next I needed to collect all the images I was going to use for this project. Having shot the model, all I needed now was the background pieces. My go to sites if I need stock, at the moment are Pixabay and Unsplash. Pixabay is a good all round site for everything, whilst Unslpash, although harder to browse, has the best slection of landscape stock by far (in my opinion). 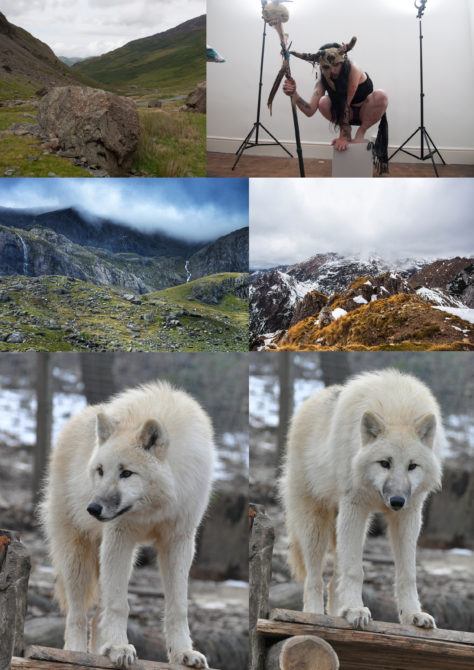 So with all my images curated and ready to go, I opened the first stock image that I would be using as the background template. As I knew it was more the top two thirds that I would be mainly using, I created a curves adjustment to take some of the contrast out. This would make it easier to create Arial perspective/depth of field later on down the line. 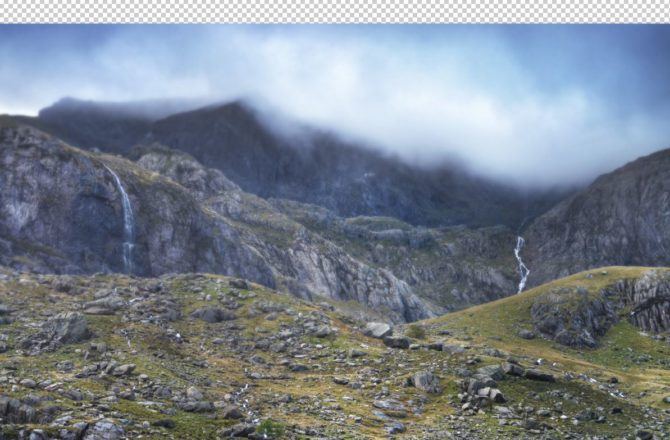 Next was the foreground. I took the image of the mountain tops with brown/orange grass, and manipulated the grass colour with a hue saturation layer. I took the sampler clicked on the greens, then slid the hue slider until I found a shade of green that matched the first background image. Once the colours were okay, I used the pen tool, to cut out the foreground element and add it into my background image’s layers palate. 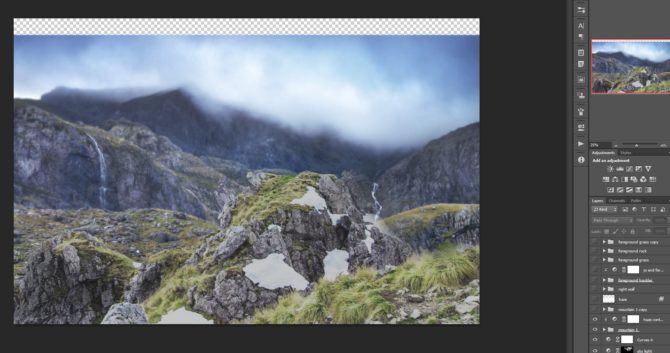 Now we have something that resembles a background and foreground,  it was time to add in a boulder for our model to perch upon. The image I chose for this was from my own stock library of images. I shot this one when I was out adventuring in the Lake District at Honister pass. If you have never been, I highly recommend it. Anyway, again I used the pen tool to cut around the rock and select out the grass (with the help of refine edge). I had some big tonal changes, and a colour change to get the boulder to match the background. First off was a hue/saturation layer to match the grass, with the background grass (using the same steps as earlier). Next I created a curves adjustment, pulled back the reds, and added a little more blue. I then created two more curves adjustments. One to bring out the highlights, and the second to lower contrast. 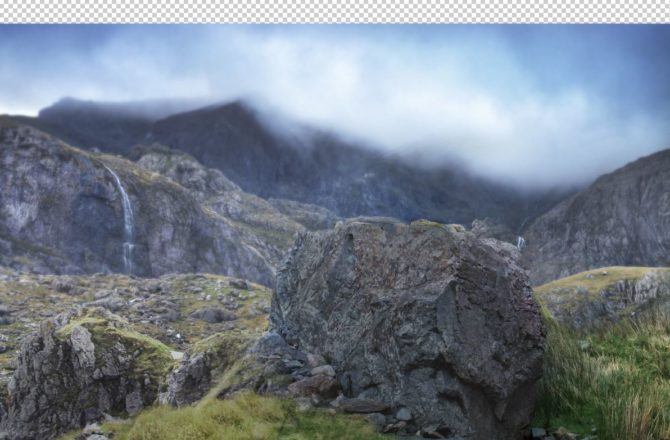 It was time to add in our model. I cut out the model roughly with the pen tool, and with a layer mask, added her in to the layers palette, and then cleaned up the mask. Cleaning up the mask was a mixture of using a small hard brush and the pen tool to refine the layer mask selection. I find this way is far better for control and a non destructive workflow. 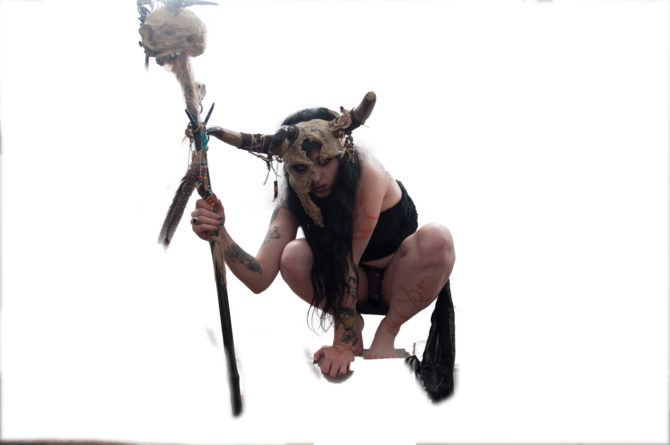 Now the model is in place, it was time for a good old colour match, which again I did with a curves adjustment layer, taking out the warm colours, and adding in more blue. To make the placement of the model seem realistic, we need a shadow underneath her. Again using the trusty curves adjustment, I darkened the midtones, added an inverted layer mask, and then brushed in the shadow. With the image being more a natural light looking style of composite, the shadow wouldn’t be very strong, so it was easier to roughly paint in. 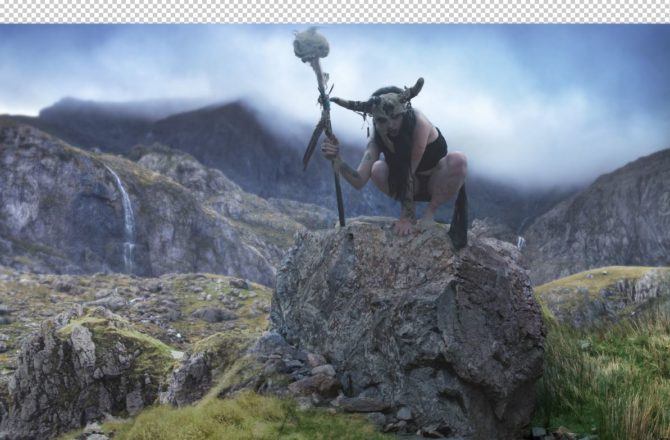 So up to now, we have our background, and mid-ground (which includes our focus, the model). To add to the feel of realism, and to enhance the images DOF, we needed a foreground. So using some stock PNG grass from Deviantart and another boulder from my lake district images, I created some foreground elements. First I brought all the files into the layers palette, and arranged them until I felt they worked composition wise in a pleasing manner. What do you think I used to match tonal values, luminosity and colour?? You guessed it, a curves adjustment layer! To match all these elements, I pulled back the warm colours, added more blue to the midtones, reduced contrast, and darkened the images. Next to get a realistic DOF, I added a Gaussian blur to each foreground image at the same strength. 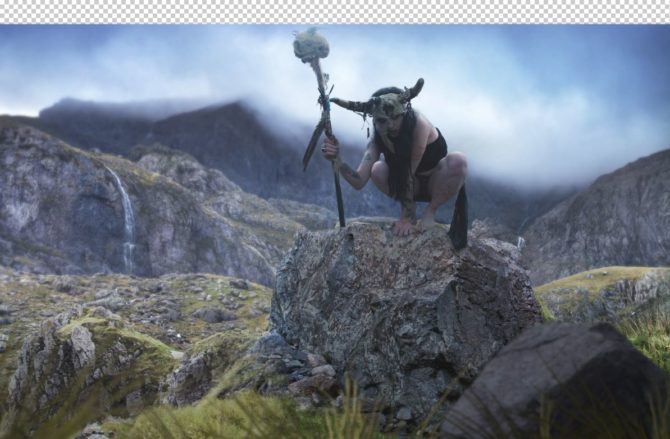 Now any self respecting witch doctor wouldn’t be seen in public without her wolves, so my next job was to realistically add some wolf buddies in. To be honest, I was expecting selecting the wolves out to be the toughest part of the editing process. Fur is always a bit of a pain when cutting out, and there usually needs to be some advanced masking, and sometimes the painting in of fake fur with a brush. But I always start first with Refine edge to take some of the hard work out. This time I took my time to select the wolves legs, bodies, and roughly select just under the fur line. Using the refine edge tool I manged to select over the fur and get an excellent mask, which need pretty much no adjustments after. This doesn’t always work mind you, so be prepared to make adjustments when masking out fur. 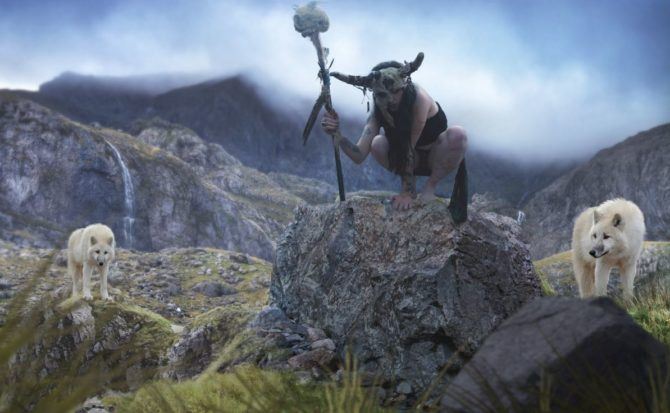 To colour match the wolves, I followed the previous steps when I colour matched the model with the (altogether now!) CURVES ADJUSTMENT LAYER. One element missing from the wolves was some highlights from the natural light on their backs. So to add this I created a curves adjustment layer, pulled up the highlights, and the midtones, added an inverted layer mask, and slowly brushed in the light. Easy peasy. 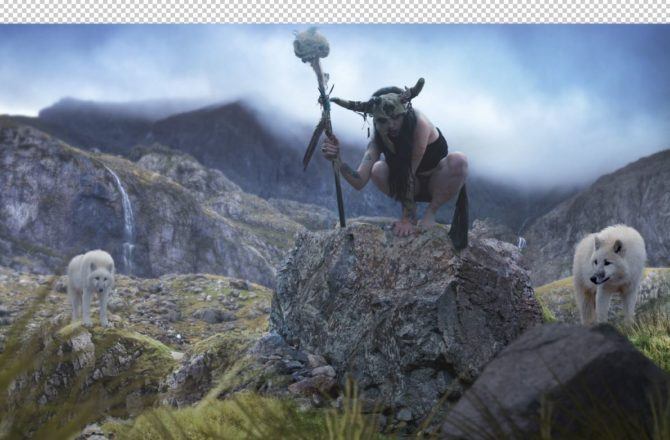 Up next was dodge and burn. I always dodge and burn every image to various levels. It has to be my favourite part of creating an image. I use 3 techniques depending on the look I am after. Compared to most photos, I didn’t do as much D & B on this one as I normally would. It was a basic curves dodge and burn. Which goes like this : 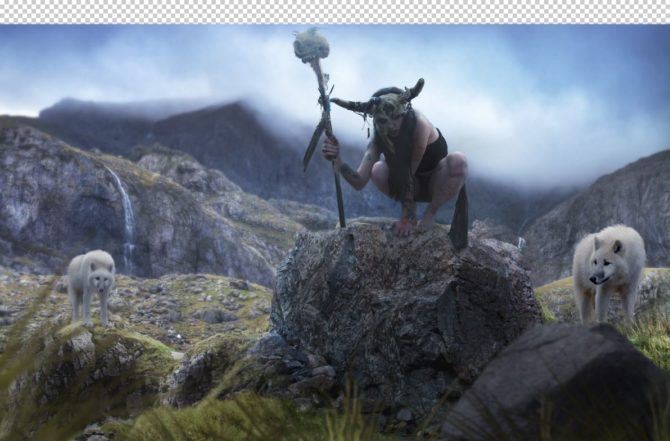 Once the dodge and burn was completed, I added a blue photo filter at around 30% opacity, just to bring all the colours together a little better. This is a simple trick, but one I believe works very well. It is subtle, but helps all the elements harmonize. 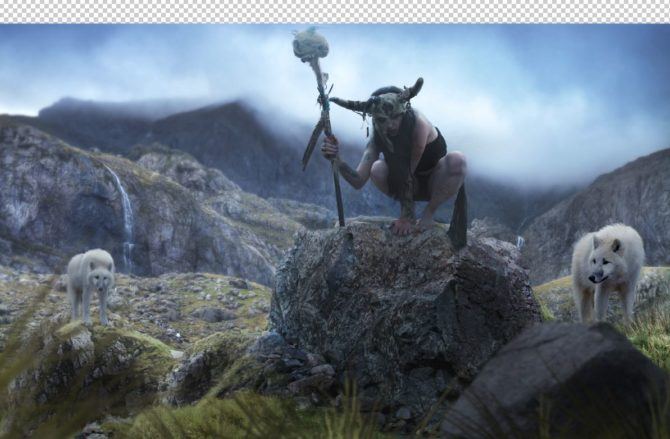 With the basic colours matched, it was time to get into some final colour toning. The image felt a little too blue and cold for me, so I wanted to warm it up a little, but keep the earthy vibe. Creating a gradient map adjustment layer, I chose from the dialog box, a black to white gradient. Once you have chosen your preset, you can then customize it to the colours you want. Go down and click on the little square under the shadows side of the slider at the bottom. Choose a dark brown from the colour picker that pops up. Press OK.

We still want our highlights to be white, so leave the little square on the right side, under the highlight side of the slider alone. But we do want to change the tone and colour of our midtones. So go down to the bottom of the slider, and in the middle of it double click. Up will pop another box, you can now control your midtones, as you did your shadow and highlights. Choose a nice midetone brown you like, then press OK at the top. 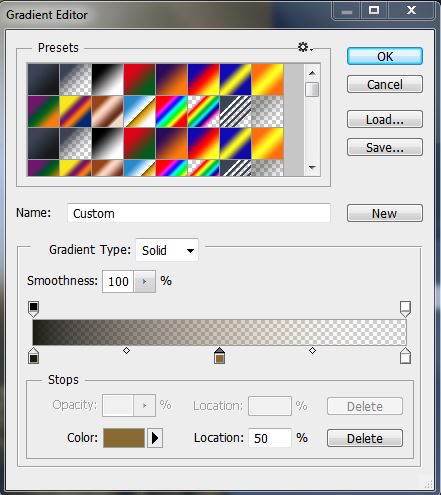 The effect will be now way to strong,  so lower your opacity to 0 and increase it until you get a pleasing colour grading, usually for me around 30-40%. 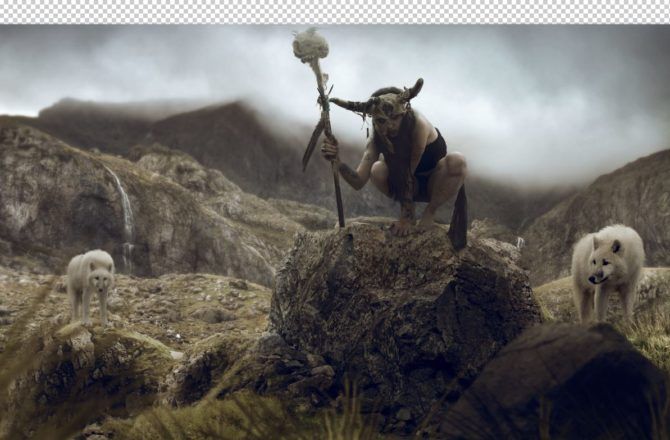 Following on from the colour grading, I added a little light leak, on the left side of the middle, nothing too dramatic. I did this by creating a new layer, and on a linear dodge blend mode, brushed the light in with a white brush on an opacity of around 11%. Then with another curves adjustment layer and inverted mask, I pulled some detail back into the models face, mask and hair. 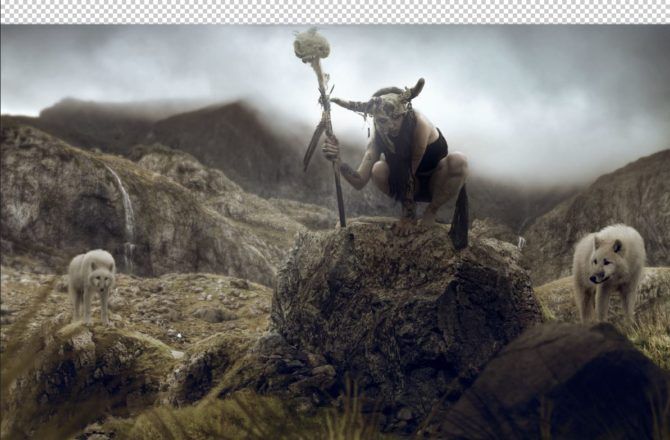 Looking at the image, I wanted to extend the sky. So using the crop tool, I pulled up and extended the canvas, then cloned in sky with the clone tool on a new layer. With an extended sky, I now had another issue, the skull of the staff was not complete. To amend this, I went back into my images from that day, and found an image with the skull horns in. I then cut out the horns, and added them into my image. With a layer mask, I blended them on to the skull. 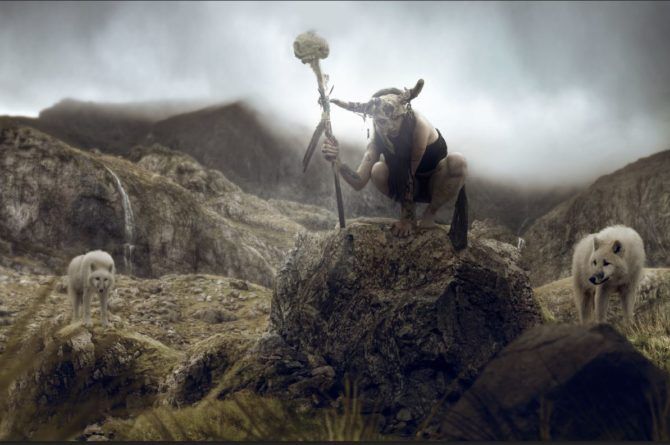 With the horns now complete, and the image pretty much at the point I wanted it, it was time to add the 2nd final colour adjustments. I liked the brown earthiness of the colour, but I wanted to incorporate a little more green and blue in. To do this I created a colour balance adjustment layer, added green into the midtones, and a little blue into the highlights, using the colour sliders.

And there we have it, the final image. Afterwards I did some light sharpening in Lightroom before exporting. With a radius of 0.5% and 60% sharpen.

To see more of my speed edits visit my youtube , feel free to ask for a speed edit, tutorial, or to just leave a comment.