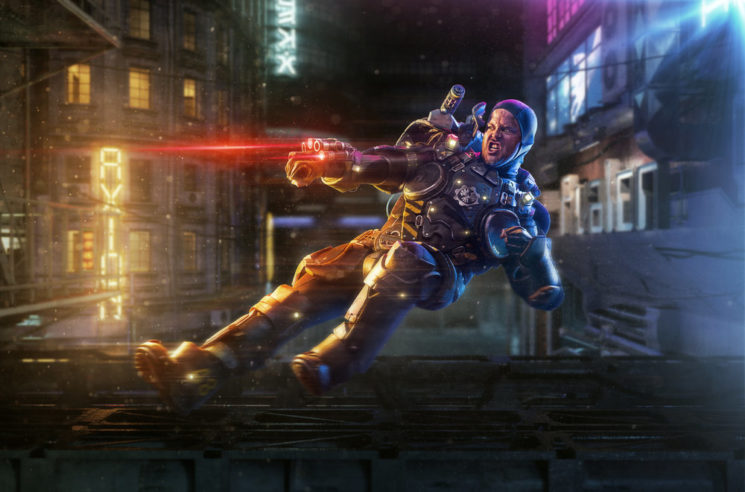 As an artist who shoots mostly composites, more often than not I’m going to be cutting out my subject and placing them in a different scene. A lot of the time I only have a rough idea of what kind of a background I’ll be using, so I just shoot my subject as best as I can and figure out the backdrop later. Sometimes I have no idea what I’m going to do with my model, but a wise and incredibly good-looking man once said, “You don’t always need a plan.”

HOWEVER, if I do a shoot knowing full well what my background looks like before I even pick up my camera, it makes everything a million times easier. 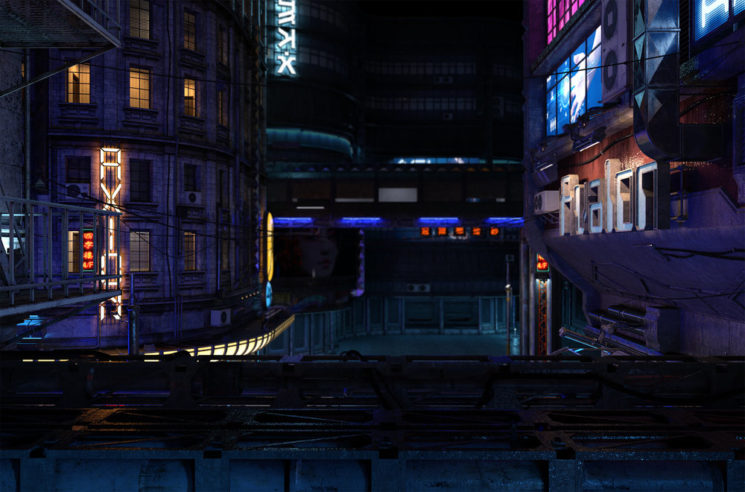 I went into the shoot for this image knowing that I wanted to create something quite vibrant, colorful, and over the top science-fiction-y. I did my pre-planning based around this awesome background. It’s pretty dang sweet because it gives you the ability to turn almost every light in the scene on and off individually with its own layer in Photoshop. You can alter the brightness and color of just one light, or mask it away from areas where you don’t want it, and completely craft the lighting/look you want to work with. I’m in love.

I really like playing with mixed lighting colors and decided I was going to enhance the warm light coming from the neon sign to the left, and then play up the blue light coming from the right side of the frame. Then, just for a little extra pizzaz, I decided to sprinkle in a pinch of the maroon/pink light from the windows in the top right. Because I had the opportunity to study my background before I started shooting, I was able to then set up my lighting to better integrate my subject into the scene.

In the past (and let’s be real, in the future too), I’ve added in colored lighting effects after I shot my subject. If you don’t feel like dealing with colored gels and whatnot while you’re shooting, I actually have a whole post about Photoshopping in different coloured lighting. However, no matter how long you edit for, it’s pretty much always going to look better if the correct colors were there to begin with. Because my subject is wearing such a crazy intricate costume, the thought of fully hand painting in three different light colors coming from all different directions would have been awful. Not to say that I didn’t still spend hours painting and tweaking the details and lighting anyway … you know how I do. 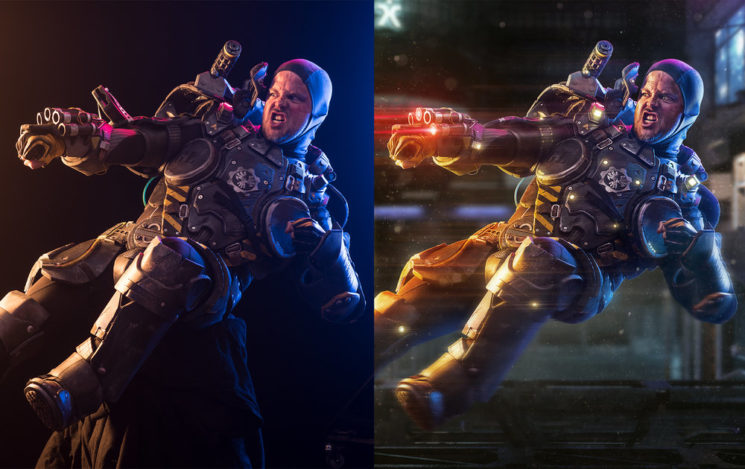 If you DON’T “know how I do,” you can actually “watch me do” in my new tutorial. Everything from shooting all the way through my editing process for this and two other images is at your disposal …. BUT WAIT!! What’s that? You don’t feel like spending the cash to have your very own copy of my shiny new tutorial? Well, fear not my friends, because right now I’m helping to host The Raw Exchange Sci-Fi Photoshop Contest and one of the prizes just happens to be my tutorial … plus $100 to the store (as if the tutorial wasn’t exciting enough for you). Go check it out, I want to see ALL of the Sci-fi awesomeness!!!!!

Side note … I GOT TO MEET AND SHOOT MATTHIAS SCHWAIGHOFER!!! In case you were not aware, he is an amazing photographer/Photoshop artist with a sense of humor about as large as his talent. Speaking of talent, he MADE the armor he wore for the photo shoot. No big deal. Just kidding, it’s a huge deal. That armor is cray. 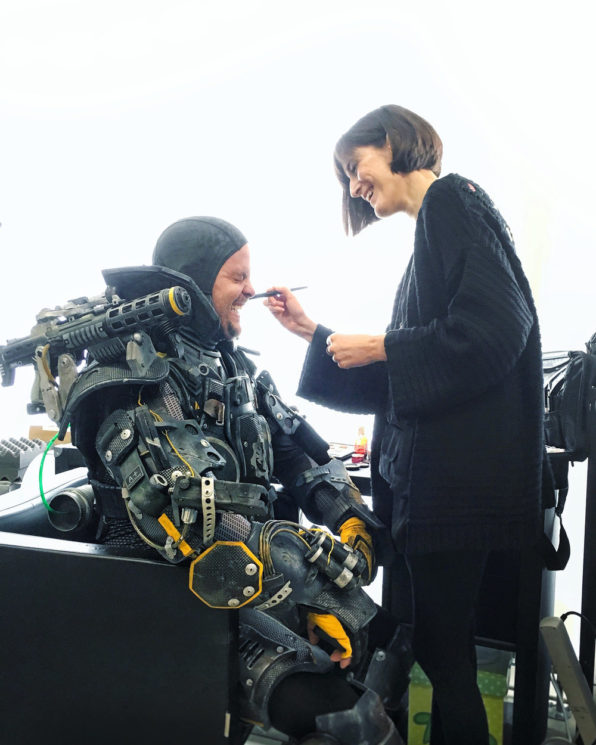 Oh, you should also probably be following Natalie Junker, who did an incredible job with the makeup for this shoot and the two other looks I shot for my tutorial that day.

So, if you’re like me and you just love editing composites, maybe try settling on your background before you start shooting and see how much easier it is to match the lighting. OR perhaps you are disciplined and always have your background picked out first, maybe just to spice things up go into the shoot blind … well, keep your eyes open, but shoot and then figure out the background later and see where your imagination takes you.

Robert Cornelius is a conceptual photographer and Photoshop artists from Lebanon, PA. You can read more of his writing on his blog and say hi on his Facebook and Instagram pages, and support his Patreon here. This article was also published here and shared with permission

Quick tips for choosing the perfect background for outdoor portraits

A Humorous Flowchart On Choosing Royalty-Free Music For Your Project