An eagle abducted a camera that was set to monitor fresh-water crocodiles in Margaret River. This was a motion triggered camera set by the rangers to try and capture some footage of fresh water. The camera went missing in May. 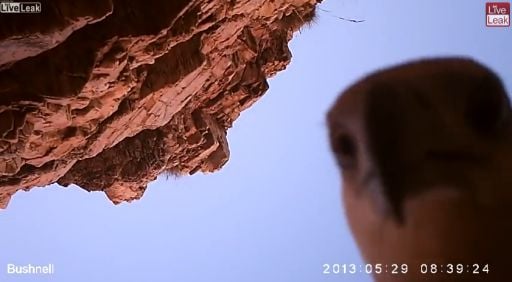 Fast forward to November – six months later – and the rangers got a call from a Parks and Wildlife ranger from Mary river – some 100 km away – who found the camera.

Being a motion triggered camera, the device took several 30 seconds sequences of the journey, ending with the eagle placing the camera on the ground and trying to peck it -actually taking several selfies.

Luckily for the small camera, it was a juvenile eagle so the camera survived, the rangers tell ABC:

“We knew it was a juvenile eagle because the adult sea eagles, once they get their food or their prey, they usually take it right up into the sky and drop it, but this one was still learning because he just took it near the cliff-side and he never dropped [it], he just put it down and started picking at it.”#

Rangers say that they’ll improve the way they secure their cameras.

Watch: Monkey steals a man’s phone and takes a bunch of photos

Giant crab steals a $4,000 thermal camera and hides it from researcher

Chimp steals a 360° camera to take selfies with friends