PSB files are Adobe’s answer to the 2GB file size limit of PSD files, the standard Photoshop Document, and something which most photographers will likely never have to deal with, but the big issue that plagues them can also apply to large or complex PSD files, too.

PSB files are something I only ever have to worry about myself when I’m making 100MP+ medium format film scans, but for professional retouchers, a 2GB document can be hit really quickly, and regularly.  One thing that’s bothered many of them for a long time is how long it takes to compress and save out those huge files.

In the days of CS5, a number of retouchers and photographers aired their concerns to Adobe, and the problem essentially boiled down to the fact that Photoshop only uses a single CPU core when compressing PSD and PSB files (this is why PSD files can also often save rather slowly once they get to around 1GB or so).

Adobe responded with a solution, of sorts, and it was the obvious solution of simply disabling compression.  In 2011, Adobe supplied the first version of a plugin and a set of instructions to do exactly this.  It was a rather involved and long winded workaround, but it fixed the problem.

The obvious drawback is that PSD and PSB files now required much more space on your hard drive, but drives are cheap, so who cares?

With compression disabled, there’s an obvious difference in save time, and when you have a habit of saving every few minutes, having to wait can slow productivity to a crawl.

But this is CS5, it’s old news, right?  Why are we posting this now?

Well, it turns out that not much has really changed.  In order to save file sizes, Photoshop still compresses PSD and PSB files by default in order to let you fit more on a drive, but it does it at the obvious cost of performance.

For many photographers, this won’t matter, especially if you’re not doing crazy amounts of retouching or compositing with a few dozen layers, but it is still something that pops up from time to time, and many users don’t know that Adobe have provided us with an easy way to solve this ourselves.

As of CS6, the plugin linked above is actually integrated into Photoshop itself and can be enabled and disabled at will via means of a simple check box in the File Handling section of Photoshop’s preferences.

There it is, down near the bottom of the File Compatibility box.

It seems that Adobe thought it an important enough feature to retain as while the dialogue box might have some slight layout differences, the checkbox is still there as of the latest version of Photoshop CC. 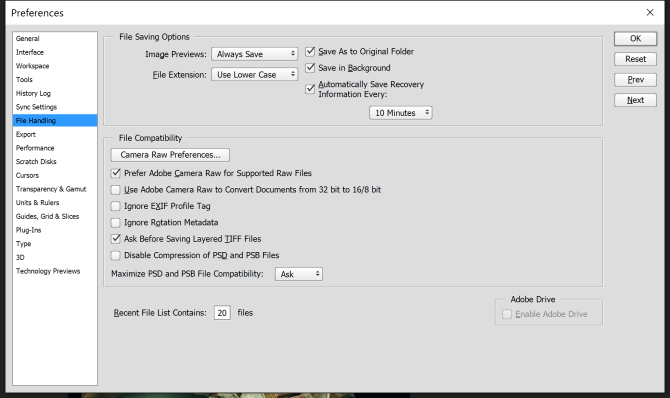 So, there you have it.  If Photoshop’s PSD & PSB file saving performance is slowing you down, and hard drive space means nothing to you, this is a quick and simple solution that makes a dramatic difference when working with large documents.

Tutorial: How to save overexposed highlights in Lightroom

How To Save Old Photos That Are Stuck Together