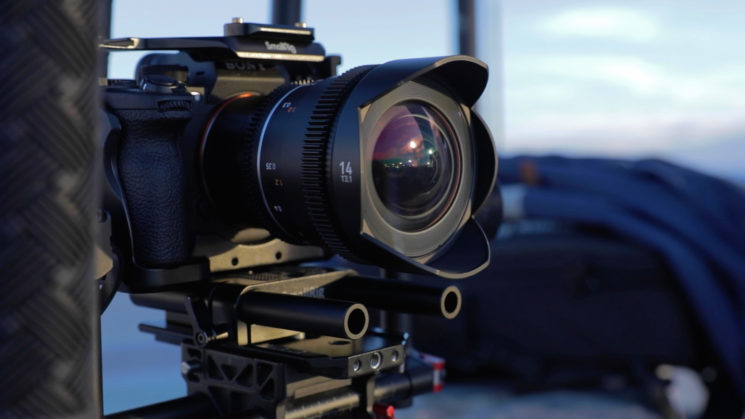 Samyang has today announced their new wide-angle 14mm T3.1 VDSLR Mk2 lens, expanding their cine lens lineup to a total of five. It joins the 24mm T1.5, 35mm T1.5, 50mm T1.5 and 85mm T1.5 to round out the set quite nicely. As with the others, the new 14mm T3.1 VDSLR Mk2 lens is available in seven different lens mounts and offers full-frame coverage.

The new Samyang VDSLR Mk2 14mm T3.1 measures as little 9.4cm long and weighs as low as 639.6g. It covers a full-frame sensor and is available in seven different mounts including full-frame, APS-C and MFT formats. They’re designed for use with both DSLRs and mirrorless systems, and if you go for the Canon RF mount, they’re equipped with rear gel filter holders.

The 14mm T3.1 VDSLR Mk2 offers a focus throw of 139° with de-clicked aperture ring providing a 45° throw on Nikon and 36° throw on everything else providing maximum control over your shot and easy movements through the use of follow focus units and external servo motors. Focus distance scales and important specs are visible from both sides of the lens to aid focus pullers and assistants.

As with the rest of the VDSLR Mk2 lineup, the 14mm T3.1 is weather-sealed to protect the camera from dust, light rain and snow from entering the lens. It offers 9 aperture blades, which allow for 18-ray starburst point light sources in your shot when stopped down to small apertures. The Mk2 range is also designed to be smaller and lighter than the original VDSLR lineup while still offering a high build quality.

A price has not yet been officially released for the new lens, although B&H has it listed from $339 to $399 available in five mounts (no Fuji X or Canon RF). The lens is expected to be formally released in February.

« What is cross polarization and how you can use it in your photography
TTArtisan launches red limited edition 50mm f/0.95 for Leica M, and it looks amazing »