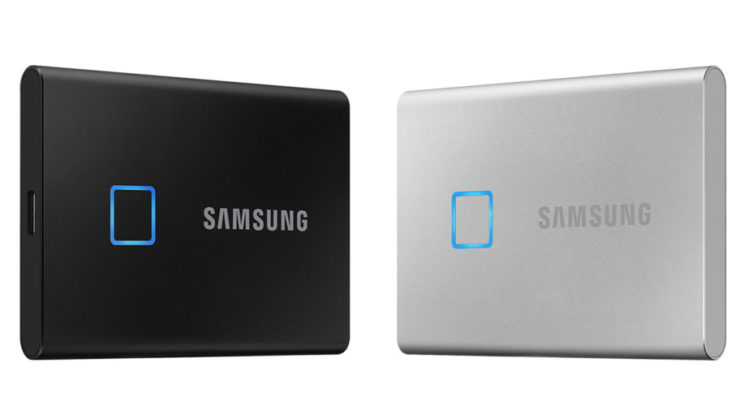 Samsung has announced its newest portable SSD, the Samsung T7 Touch. Building on the popularity of the Samsung T5, the new T7 Touch is designed to operate with the fastest speeds possible on the USB 3.2 Gen 2 spec. It doubles the speed of the T5, coming in at around 1GB/sec. The Samsung T7 also comes with security in mind, adding a Touch ID fingerprint scanner on top of password protection and AES 256-bit hardware encryption.

Like the Samsung T5, the Samsung T7 Touch portable SSD comes in three capacities of 500GB, 1TB and 2TB, but it can shift that data over twice as fast with read and write speeds of up to 1,050MB/sec and 1,000MB/sec respectively – assuming they’re hooked up to a host device and cables that support the USB 3.2 Gen 2 spec.

For those currently using the Samsung T5 on cameras like the Pocket 4K with purpose-built T5 holder brackets, it looks like it might be good news. The Samsung T7 comes in at a touch narrower and shorter than the T5, so it should easily be able to slip into those brackets, although you might need to tighten them down a tad more.

Availability and shipping on the Samsung T7 Touch is expected to begin this month in over 30 countries, with a regular non-touch T7 portable SSD coming in Q2. You can find out more on the Samsung website.

« These are the five worst mistakes you make when editing landscape photos
Manfrotto has entered the memory card market with new rugged SD, microSD and CompactFlash cards »