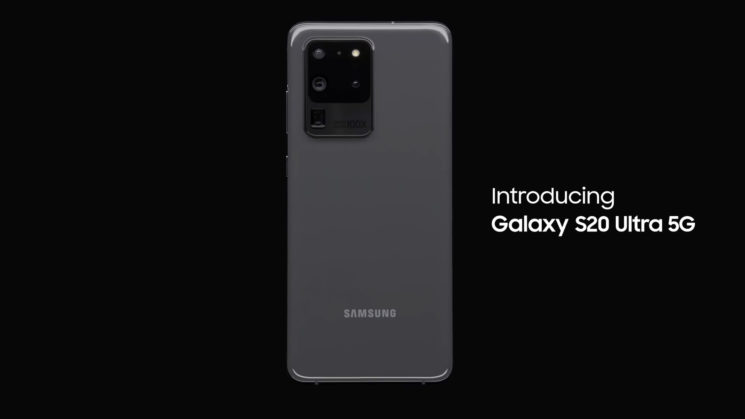 Well, they’re official Samsung’s announced its array of new smartphones which includes the Samsung Galaxy S20, S20 Plus and S20 Ultra – the latter of which sporting a 48-megapixel 100x zoom camera and a 108-megapixel main camera. Also announced is the new Z Flip phone, Samsung’s second attempt at a phone with a folding screen.

You can watch the entire Samsung Galaxy Unpacked 2020 Livestream here.

All three phones will be in stores in the USA on March 6th with pre-orders starting up on February 21st. In the UK, they’ll go on sale on March 13th (yup, a Friday). Most of the specs on the three new phones in the Samsung Galaxy S20 range don’t really matter, but let’s take a look at the cameras.

The odd one out here is the Samsung Galaxy S20 Ultra, which boasts a rather impressive set of cameras. IT features a whopping 108-megapixel f/1.8 main camera (presumably Samsung’s own ISOCELL sensor), a 48-megapixel f/3.5 10x optical telephoto camera and a 12-megapixel f/2.2 ultra-wide. On the front the Ultra gets a 40-megapixel f/2.2 selfie camera.

All three phones in the Samsung Galaxy S20 range are also amongst the first to feature 8K video recording at 24fps (although the Ultra can potentially go higher). Pretty much nobody owns an 8K TV yet, but Samsung suggests that the higher resolution offers a degree of future-proofing and offers the option to extract higher resolution stills from video.

One difference between each of the three phones is the displays. All three are Infinity-O AMOLED displays with 20:9 aspect ratios and a resolution of 1440 x 3200 pixels. But the sizes are all slightly different. The S20 has a 6.2″ screen, the S20+ is 6.7″ and the S20 Ultra boasts an impressive 6.9″ display.  All three support HDR10+ and offer a 120Hz refresh rate (double that of the Galaxy S10 range) for smoother on-screen animation and playback.

The Samsung Galaxy Z Flip is their second entry into the world of folding cameras. The flip arrives on Valentine’s day for $1,380 (£1300 in the UK) and goes back to the early 2,000s with a flip phone design. Instead of having a screen at the top and buttons at the bottom, though, the Z Flip has a 6.7″ folding OLED display which covers the entire interior. It also features a second 1.1″ OLED display on its exterior to let you know when you have notifications or calls while the device is closed.

The phone is clearly aimed more towards your average consumer (with far too much disposable income) rather than the high tech business world or those with a lean towards photography like the Samsung Galaxy Fold. On the front (on the inside?) it features a 10-megapixel f/2.4 selfie camera with 12-megapixel regular and ultra-wide cameras on the rear. 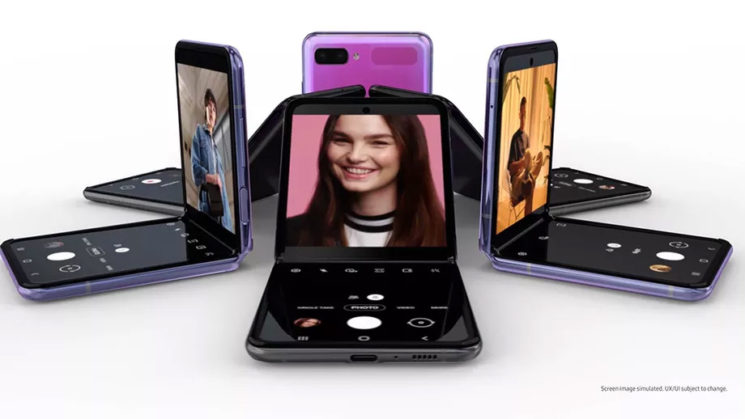 With certain apps, like YouTube or when viewing images, the 6.7″ display will automatically split up into a pair of 4″ displays (remember, screen measurements are taken diagonally). This is something Samsung calls “Flex Mode” and they say they’ve worked closely with Google on the design to implement this. Users also have the ability to multitask with different apps on each of the two halves of the screen.

The Samsung Galaxy Z Flip goes on sale in the USA and Korea in black and purple on February 14th priced at $1,380. If you really want to overspend on a phone, though, a gold version is expected to be released in “select countries” sometime soon. you can find out more on the Samsung website.

[via Tech Radar / The Verge]