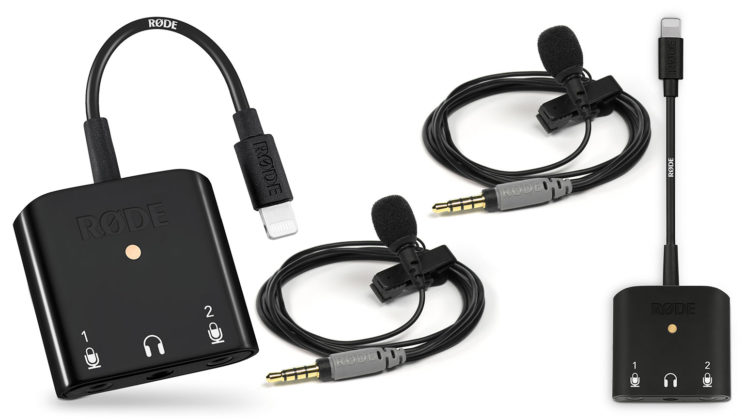 Even though many of us have transitioned away from using our phones to shoot video, they can still be valuable devices for audio. Over the last couple of years, I’ve regularly used various phones ass backup audio devices with a Rode smartLav+.

But then Apple went and took the headphone jack away from iPhones. Of course, they included a lightning adapter, but if you’re going to carry adapters around, why not go big? That’s where the Rode SC6-L comes in, offering a pair of TRRS microphone sockets and a stereo headphone jack.

Rode have released a similar adapter before, the Rode SC6. It separates out a standard TRRS connector into the same dual mic + headphones setup. But the advantage here with the Lightning adapter is that it allows you to record the two microphone inputs on separate channels. The older SC6 forced you to record both microphones to the same mono channel.

While you’ll still need the original SC6 if you’re an Android shooter, and you’re still limited to recording both microphones to the same audio track, iPhone shooters (iOS11+) now have a pretty decent option for dual lav mic recording. Hopefully, we’ll see a Type-C compatible version of this device in the near future for Android users. Or, better yet, why not a version with a Type-C socket on the unit itself, then we can cable it to whichever phone is handy?

It looks like it could be an ideal solution for super low budget interviews. Although, if you’re using two smartLav+ mics simultaneously on different people, you’ll probably have to be fairly close together due to the length of the wires. Or, you may need to have the wires visible. With my own smartLav+ plugged directly into my phone, I can just about reach to get the phone in my pocket.

Rode hasn’t said exactly when the SC6-L will be released yet, but there will be two packages available. You can buy the Rode SC6-L on its own, or you can buy it as Mobile Interview Kit which includes the SC6-L along with a pair of Rode smartLav+ microphones. We’ll update this post when we know more.