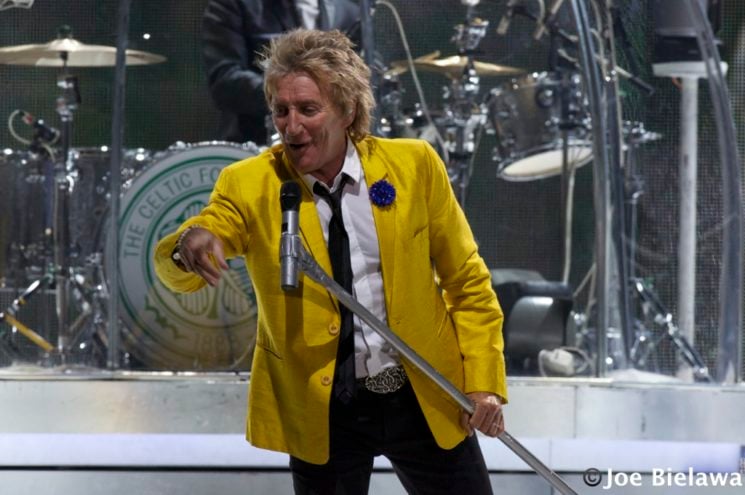 We’ve seen celebrities getting sued (and banned from Instagram) for copyright infringement. After Bruno Mars, Brian May, and Gigi Hadid, now it happened to Sir Rod Stewart. Only this time, the legendary singer is being sued for using a photo as a gig backdrop, and not for posting it to Instagram. And the weird thing is: the photographer who filed the lawsuit didn’t even take the photo.

Reportedly, Sir Rod Stewart used a photo of himself with his ex-girlfriend as a gig backdrop back in 2015, and British photographer Julia McLellan holds the copyright to the image. She claims that she contacted Stewart’s team multiple times, seeking for the appropriate compensation. However, they ignored her, so she decided to start legal action. As BBC writes, McLellan is seeking £10,000 (£9,999.99, to be exact) for copyright infringement. In US dollars, it’s around $12,850.

The photo was taken back in the 1960s and the first time it was used was on a video backdrop at BBC2’s Live in Hyde Park: A Festival in a Day concert. And as I mentioned, McLellan didn’t take the photo. The photographer behind it is Stewart’s former school friend, Christopher Southwood. However, McLellan claims that she acquired the copyright to the image in 2004.

According to McLellan, Southwood gave Stewart a copy of the photograph as a keepsake. She adds, however, that it’s “very different from using it commercially.” BBC writes that, if she wins the case, McLellan plans to split the sum equally with Southwood.

On the other hand, Stewart’s team believes that the court should reject McLellan’s claim. They say she seeks an “absurd level of damages for a totally innocent, brief and incidental use by Sir Rod of a personal snapshot as part of another, more substantial, artistic work.” Sir Rod Stewart himself adds that the photo was “one of hundreds used and it appeared for only eight seconds.”

Personally, I think this is a pretty weird case. It’s the first time I hear that someone is getting sued for using a photo as a part of a concert backdrop. For Sir Rod Stewart, it seems like it’s just one of the photos from his personal collection (similar to Bruno Mars’ case). Also, I don’t remember any instances when the actual photographer was okay with it, and someone else filed a lawsuit.

The case is still ongoing, and the date of the next hearing isn’t known yet. But, I am curious to hear what the court will decide. Who do you think is in the right here?