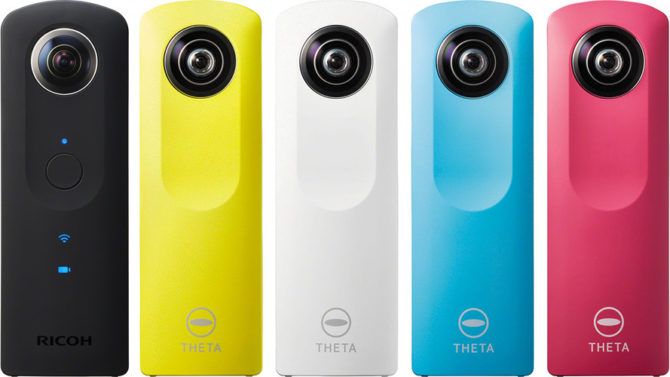 With the Ricoh Theta m15 showing as discontinued for a couple of colours on B&H, and the demands of VR and 360° camera users already increasing far beyond the 1080p limits of the Theta S, now would be a great time for Ricoh to announce a new 4K VR camera,

According to Pentax Rumours, that’s exactly Ricoh are preparing to do, and are expecting an official announcement could be made during Photokina in September.

We’re big fans of 360 cameras here at DIYP, and got some neat images to document our adventures at The Photography Show in March, but one thing that’s always annoyed me about most VR cameras is the resolution.

1080p is a fine resolution if it’s just filling a flat 16:9 frame on a monitor in front of you, but when you’re squashing a field of view several times as wide and as high that for which the format was intended, and then stretching it out to remove the distortion, then detail can start to degrade pretty rapidly.

That quality might be acceptable to most users, especially when only being viewed on a phone, so maybe it’s just me, but I don’t feel that a 1080p 360° camera is worth getting, except for the “fun factor”, not that there’s necessarily anything wrong with that. We certainly had lots of fun with it at The Photography Show earlier this year.

But if your aspirations are a little more serious, I still think the quality has some way to go for the most part and 4K should be a bare minimum.

Ricoh haven’t stated that their new camera will shoot 4K, or officially stated that there’s even an new camera on the way, but if there is, it would almost certainly need to be 4K in order to keep up with the new competition.

The Samsung Gear 360 shoots 4K footage, as does Nikon’s (still delayed) KeyMission 360 action camera, so I can’t see Ricoh giving us yet another 1080p-only camera.

If Ricoh do indeed launch a new 360° camera at Photokina in September, then DIYP will be there, so we’ll be sure to get a hands on and let you know what we think.

For now, tell us what you think. Have you jumped into the 360° world yet? Or are you waiting for the technology to mature a little first, as I’ve wanted to? Where do you feel 360° cameras are lacking? Let us know in the comments.

« 9 essential things you need to know about using gimbals
Tokina’s 24-70 vs Nikon’s – Half the price, better quality »