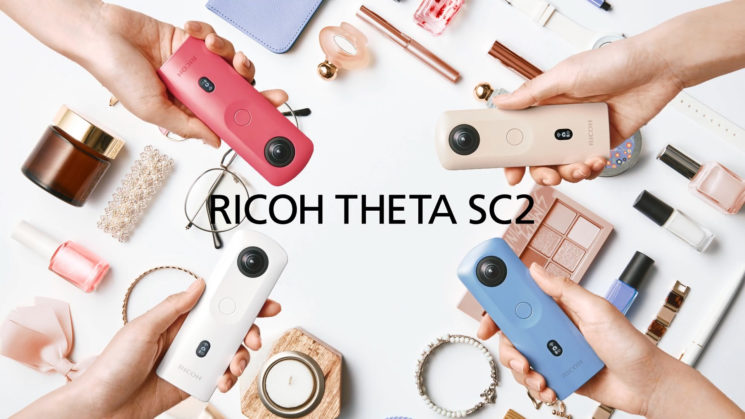 Well, the specs appear to be as disappointing as the leak suggested but the Ricoh Theta SC2 has now been officially announced. It’s a 4K entry-level 360° camera with 14GB of internal memory and no microSD card slot. But, the price actually seems to reflect the specs, coming in at only $299. The shipping date is a little sooner than previously rumoured, with units expected to go out on December 2nd instead of Friday the 13th.

The specs are essentially identical to those that were recently leaked. The lack of 5.7K is disappointing, as it does make quite a significant difference to video over 4K when it comes to 360° footage. But for photos, you do get around 5.4K, which isn’t too bad, particularly if you’re only posting them to social media – which is where most 360° photos end up.

The micro USB 2.0 socket is also somewhat disappointing. While only used for charging and basic file transfer communications, it would’ve been nice to see this come with a Type-C USB socket. It’s just a more substantial and mechanically stronger connection. Even if it couldn’t satisfy full USB 3.1 Gen 2 speeds, it would’ve still been nice to get the socket.

To be fair, though, most 360° cameras still seem to bear the micro USB socket, and it’s been one of my biggest complaints about all of them. Most of my devices have migrated over to Type-C sockets now. My phone, memory card readers, some battery chargers and other devices. 360° cameras are one of only two devices I use now that still use micro USB and require me to carry those extra cables with me.

When it comes to storage, though, other 360° cameras on the market do have the edge, offering a microSD card slot, or massive internal storage. A lowly 14GB isn’t going to last very long. Of course, this camera is aimed at the entry-level enthusiasts who probably aren’t going to be shooting a whole lot. But when it does get full, it’s probably going to make things a little more frustrating for those entry-level users to clear out. And if it fills up while you’re using it, you can’t just swap it out for fresh empty storage.

For $299.95, though, it doesn’t look like a terrible option. It’s certainly cheaper than similar form-factor cameras like the Insta360 ONE X. But, I think, personally, for the extra $100, it would be worth going up to something like that instead.

But if the Ricoh Theta SC2 looks right up your street, they’re available to pre-order now for $299 in Beige, Blue, Pink and White. Shipping is expected to begin on December 2nd.