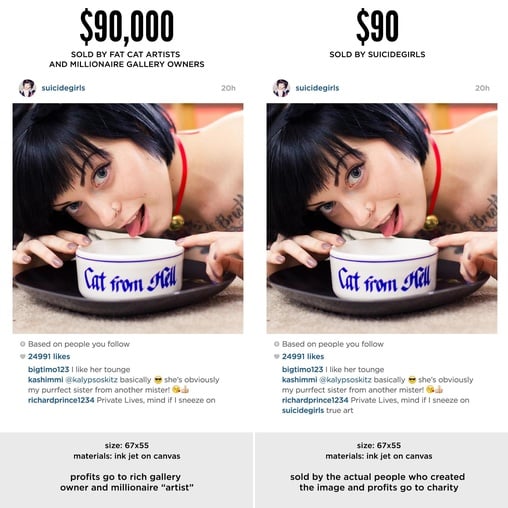 Richard Prince has been in the headlines lately after being accused, once again, of stealing other peoples’ work and selling it as his own.

Prince’s latest controversial “art” is basically a series of screenshots of various Instagram photos, along with the uploader’s name and some of the comments. In order for the work to be considered his own, Prince added a comment to the original photo – and voila! The magic of appropriation in its most embarrassing moment.

The so-called ‘face’ of the story has been blue-haired Doe Deere, but while she has stated she will not “go after him”, another party involved in this disgraceful incident has decided to take action, and in the most appropriate way.

One of the ripped-off photos belongs to SuicideGirls, and its founder Missy announced yesterday that they’re fighting back by selling prints of Prince’s appropriated work for just 0.1% of his selling price.

I guess you could call it re-appropriation.

Following the influx of questions, Missy shared her thoughts about Prince capturing and selling a series of SuicideGirls Instagram posts:

“My first thought was I don’t know anyone who can spend $90,000 on anything other than a house. Maybe I know a few people who can spend it on a car. As to the copyright issue? If I had a nickel for every time someone used our images without our permission in a commercial endeavour I’d be able to spend $90,000 on art. I was once really annoyed by Forever 21 selling shirts with our slightly altered images on them, but an Artist?

Richard Prince is an artist and he found the images we and our girls publish on instagram as representative of something worth commenting on, part of the zeitgeist, I guess? Thanks Richard!

I’m just bummed that his art is out of reach for people like me and the people portrayed in the art he is selling”.

Offering a solution to the problem, Missy announced that SuicideGirls will sell “the exact same prints people paid $90,000 for $90 each”. “Beautiful Art, 99.9% off the original price”, she added, and I absolutely love this idea!

To make things even better, SuicideGirls will be donating the profits to the Electronic Frontier Foundation, a non-profit organization with the promising slogan “defending your rights in the digital world”.

Obviously SuicideGirls can’t sell the ‘exact’ prints as they would be violating Prince’s copyright, so they did what he did and added a comment of their own. Each of SuicideGirls’ posts turned Richard Prince “art” turned SuicideGirls art has the comment “true art” added under Prince’s own comment. 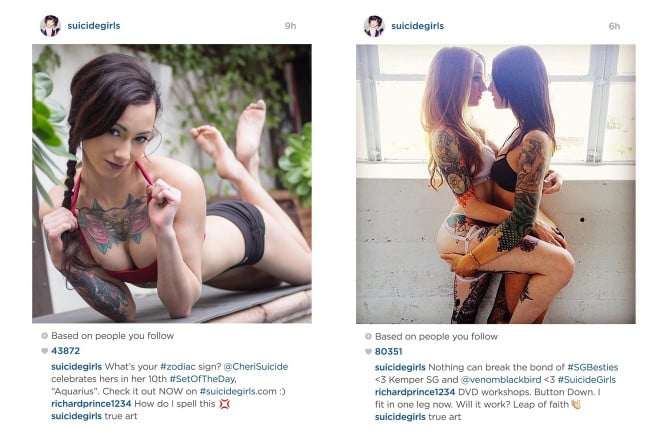 A couple of SuicideGirls’ re-appropriated works – available for just $90 each. Source: SuicideGirls

Prince received plenty of criticism not only for the lazy work he’s done, but also for the fact that he did not receive permission from the people whose photos he used nor did he inform them of him doing so.

This raises the question whether SuicideGirls in turn approached Prince for his permission, to which Missy brilliantly replied “we have the same permission from him that he had from us. ;)”. 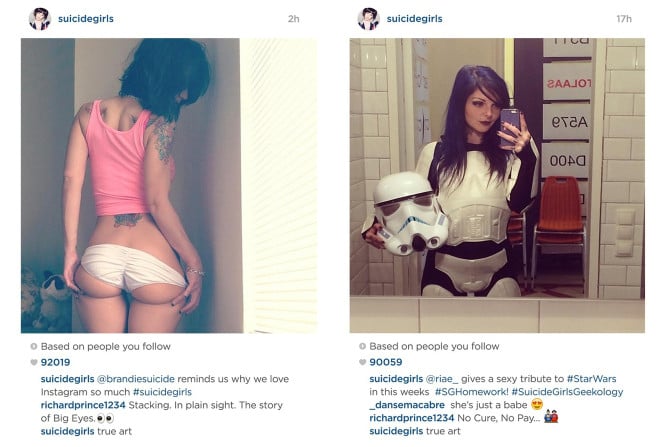 A couple of SuicideGirls’ re-appropriated works – available for just $90 each. Source: SuicideGirls

While I understand Doe Deere’s decision not to take action against Prince, she had the opportunity to try and make a change with her one million social media fans and followers and the media’s attention that was directed her way.

Hopefully SuicideGirls, with a social media following ten million strong, will be able to get the ball rolling on this matter.

So far Prince does not seem fazed by the criticism, but I eagerly await his response to this latest move.

Am I bothered by idiots & morons? Naw. Reading the only copy of Ted Kaczynski's auto-biography. Just 1 copy. Now there's a crackpot.

Like I said, I’m a big fan of SG’s re-appropriation, but I’d like to see someone take Richard Prince to court over his “New Portraits” series.

Should that fail, perhaps the next step should be to appropriate the rest of Prince’s work.

Much better idea. I started off selling my "family" tweets for $18 at Karma not to long ago. Missy Suicide is smart. pic.twitter.com/3OfjgNBq4a