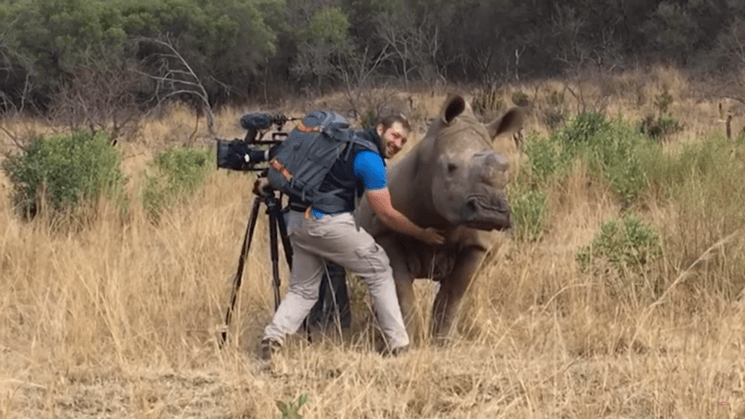 While he was shooting a film about rhino poaching, filmmaker Garth De Bruno Austin had the most amazing and unordinary experience. A wild rhino approached him, asking for a belly rub. I’m used to doing this with cats and dogs, but this is something really out of the ordinary. And it may be the cutest and the most unusual encounter you’ll see today.

Garth has been filming this particular rhino for a couple of years. Because of this, the animal has gained certain trust towards him although it’s wild. So, the rhino just approached him in the middle of filming asking for affection. And as Garth writes: “If a rhino walks straight up to you while you’re filming and wants some rubs… you better rub that rhino like your life depends on it!” As a matter of fact, it probably does, since rhinos can be pretty badass if they want. In my opinion, they should be even more aggressive, considering that they are endangered because of poaching.

Anyway, remember you shouldn’t try approaching and petting a wild rhino on your own. And don’t even think of trying to take a selfie with it, or any other wild animal for that matter. Garth points out that he was lucky enough to film this rhino for a while and it was solely the animal’s decision to approach him. He warns: “DO NOT try and do this with a truly ‘WILD’ rhino as it may end up with you being dead!”

So, after clearing this out, enjoy this adorable video. And if you “also like to live dangerously”, pet your cat when you decide it, and not her. Trust me, it’s like Russian roulette.

[Filming Up Close And Personal With A Rhino via Reddit]

This cameraman stays professional despite a horse who’s trying to eat him
« Retouching interiors in Lightroom & Photoshop
Police tells attorney he can’t film them, Police Chief invites citizens to film the police in response »