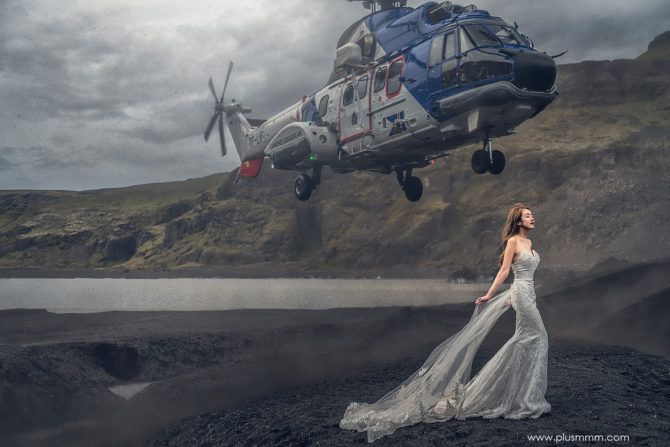 Everybody wants their wedding photographs to be interesting and special. This is probably why this couple chose to hire photographer CM Leung and shoot theirs in Iceland. It’s a beautiful country, which is why it has become such a popular wedding destination.

But, the shoot turned out to be a little more different than the couple had planned for. During the shoot, a rescue helicopter buzzed over the bride and crew.

The helicopter was there on a rescue mission to airlift a seriously injured person who fell down a cliff nearby. The photographer and wedding couple simply happened to be there at the same time.

When the helicopter took off mid-shoot, however, they were caught a little off guard.

The helicopter does appear to get very close to the bride. As photographers, however, we know appearances on camera can be deceiving.

Birgir Örn Sigurðsson of the Víkverji Search and Rescue was on scene during the shoot. He says that the helicopter was a safe distance away and didn’t fly directly over the bride.

Leung posted a behind the scenes video of the session leading up to where the bride needed to have her hair and makeup fixed.

It is speculated that the apparent closeness of the helicopter to the bridge was due to the manner in which it was shot. A trick of the camera like an accidental forced perspective. Still, it’s a hell of a downdraft.

It did result in a pretty awesome photo, though.

Update: The article previously incorrectly stated that the helicopter were there to help with shoot safety on the ground.  This has been corrected.

This couple hired a robot photographer to shoot their wedding day

« Faces of Foxes: Every Fox Has Different Personality
How to create shafts of light in-camera in your photos and video »