It occurred to me recently that I’ve been a regular contributor here at DIY Photography for four months, and I’ve yet to actually write anything DIY-related. So, before anybody notices and rats me out to the boss, today’s the day I bring a little DIY to the table– compliments of a Chanukah gift from my 12-year-old son.

This particular man-cub is one of the most thoughtful people I know, which is one of the reasons he gets so pissed off every year around the holidays and my birthday over the high price of camera-related goodies. He wants to do something nice and can’t afford it. This year, though, he was bound and determined, and let me tell you– that kid of mine struck gold. For about twenty bucks, he got me the Recesky TLR DIY Camera Kit. 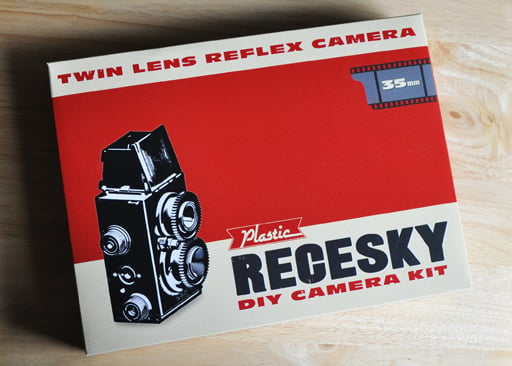 As someone who first caught the photography bug back in the days of film, I still miss it and try to keep an old film camera handy– especially when I venture out for street photography. The Recesky (you might have seen it sold as the Gakkenflex) is a great kit for anyone with an appreciation for film and vintage or toy cameras. If you have kids or teach photography, it’s an excellent educational tool. Seeing how a functioning camera is put together– from the lenses, to the mirror, to the shutter mechanism– has a way of clearing your head and getting back to basics.

It also has a way of humbling you. Getting this thing put together is only half the battle. Understanding how to coax decent photographs out of it is the other half.

The TLR uses two objective lenses of the same focal length. The top lens works with the viewfinder system, while the bottom lens is the actual “taking” lens. The lenses are connected with gears around their circumferences to ensure that the focus in the viewfinder and on the focusing screen matches that of the images caught on film. In addition to the “view” lens, the viewfinder is made up of a 45-degree-angled mirror (hence the “reflex”), a matte focusing screen on top of the camera, and a pop-up hood around it. Most commercial TLRs– like the iconic Rolleiflex– used leaf shutters, with shutter speeds up to 1/500 second. Some models also had what was loosely referred to as a “sports finder.” This was a hole in the pop-up hood on top of the camera that let photographers loosely compose their shots by looking straight ahead at eye-level, rather than down at waist-level. 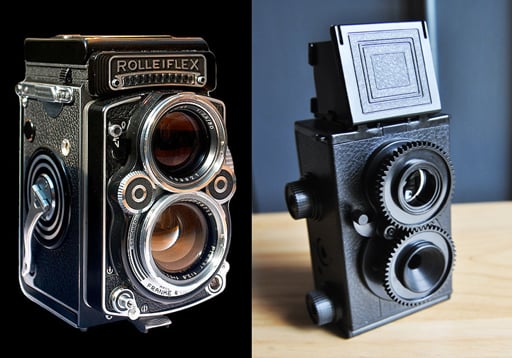 Twin Lens Reflex (TLR) cameras were originally developed around 1870, as an attempt to streamline the photographic process. Somebody smart– and apparently on a tight schedule– figured out that adding a second lens right next to the taking lens meant that one could focus without having to constantly switch out the ground glass screen for the plate. This was a big step in cutting down on the amount of time required to take a photo.

Today, TLRs are pretty much the domain of collectors. I’ve never actually used a “real” one, but this kit has been a fun way to learn about film camera mechanics, spend some quality time with my son, and begin looking at the world in a whole new way.

For the most part, assembly was not that bad. With the exception of the shutter mechanism, the rest of the camera’s 68 pieces went together fairly easily. The shutter assembly is made up of six pieces– three moving parts and three springs. The spring that pulls the shutter open is particularly tiny. Stretching or bending it even slightly will definitely affect the shutter speed, and possibly render the shutter useless. You’d think they would mention that somewhere in the instructions. 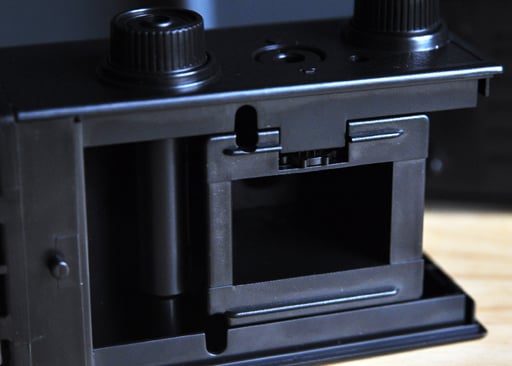 Speaking of the instructions, I’ve seen auto repair manuals that were easier to read. Let’s just say that the translation from Chinese into English was not a smooth one. Nowhere in the instructions, for example, is there any indication of this camera’s aperture or shutter speed. A little online detective work revealed that what the instructions refer to as a “twist plate” in the bottom lens is actually the ring that creates the f/11 aperture. Removing this “plate” opens the aperture up to f/5.6.

Start-to-finish, this took a couple of hours to put together. In fairness, though, now that I’ve done one, I could probably do it again in about a half hour. The shutter was the only tricky part.

The Recesky– with the exception of the screws and springs– is made entirely of ABS plastic. The lens is a fixed, 50mm, single plastic element, with a focusing distance of approximately 40 cm to infinity. As already mentioned, the aperture is f/11, but only if you follow the instructions. Leaving the “twist plate” out gives you the much more usable f/5.6.

The shutter speed is where things get a little dicey. The same research that netted me the aperture info also told me that the shutter speed is 1/125, but only if you put it together correctly. A bent spring or a screw that’s too tight or too loose can easily throw the whole thing out of whack. Additionally, it is possible for the actual shutter speed to be anywhere between 1/50 and 1/250, depending on production tolerances. That’s quite a difference. 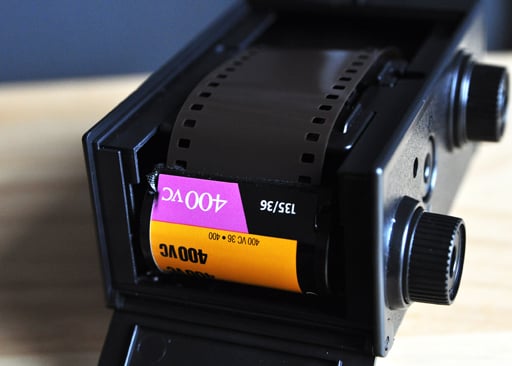 Unlike “real” TLRs, which took 120 medium format film, the Recesky uses 35mm. While there’s no frame counter, there is a wheel with an arrow on the right side of the camera, indicating how far to advance the film to the next frame. Multiple exposures are possible, since the shutter and film advance are uncoupled from each other.

Not exactly the most precise marvel of photographic technology, but it’s damn fun.

My first attempt was with a roll of Kodak Portra 400VC film that had expired about three years ago. Film tends to have a longer shelf life than what’s printed on the box, so I figured the worst that could happen would be an even more vintage feel to photos. There are definitely some focus issues, but overall I’m happy with the possibilities. 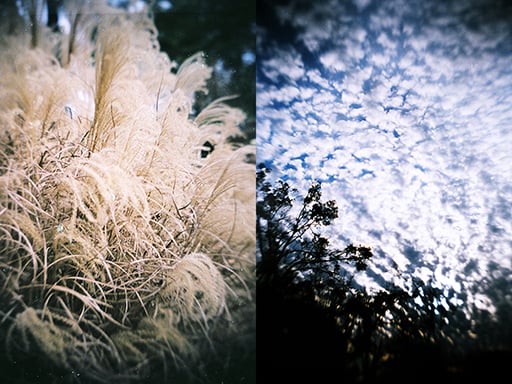 Attempt #2 was with a roll of Ilford XP-2 Black & White (not-yet-expired) film. There are still some focus issues around the edges, but the high contrast and sharp center-focus tells me that with some patience and some practice, solid results may be possible. This is a very difficult camera to hold steady. While the idea of mounting a $20 camera on a $300 tripod may sound a little ridiculous, it might be just what you need to get sharper focus. 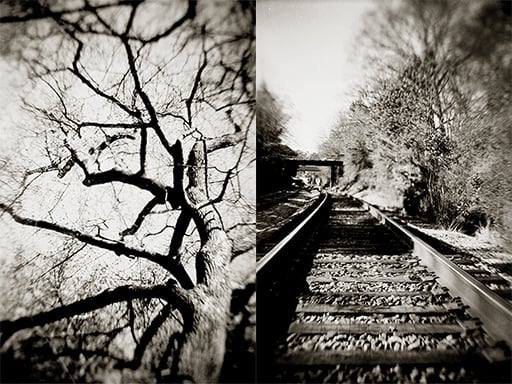 The mechanical simplicity of this camera tricks you into thinking that getting great results with it is going to be just as easy as putting it together. Wrong. There is definitely a learning curve. We’ve gotten so used to autofocus, L-series glass, and these amazing digital cameras, that we’ve lost sight of how all of this actually works. I tell my photography students that our DSLRs are hand-held computers with a window on the world. My Recesky– much like my Holga— reminds me that figuring out how to capture light in a box and tell a story with it wasn’t always so easy. 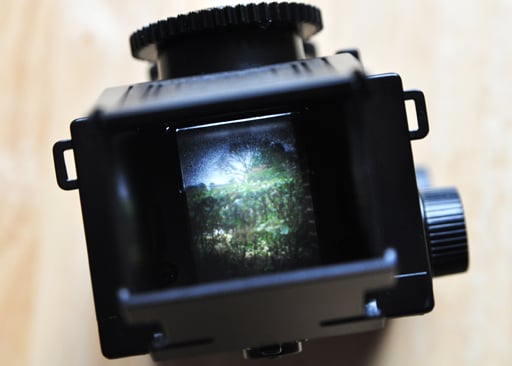 The Recesky– or any TLR for that matter– will change how you look at the world around you. A waist-level viewfinder means not too many creative camera angles, and a focus screen that gives you a horizontally inverted view means slowing down to compose. This camera conspires against you at every turn, but in the best possible way. You’re not going to shoot a wedding or a cookbook with this camera. You may not even use it very often. But when you do, you’ll slow down and remember what drew you to photography in the first place.

And you might get to spend some time with your awesomely cool kid while you’re at it.

This watch is like a stylish TLR camera for your wrist