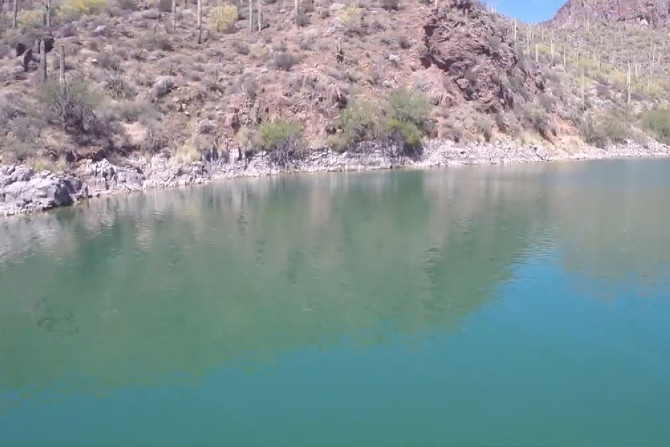 The DJI Phantom has a failsafe mode that will automatically land the drone if the remote controller’s battery runs out of juice. This is a smart feature, but not very helpful when flying over water.

In such a situation your options are to watch your drone go belly up or make a run for it, or in Tom Leogrande’s case, race a quarter mile for it.

Watch as the drone, capturing footage for a fishing TV show, gets saved and avoids becoming fish bait.

At that point Tom says the drone rose to 600 feet before beginning a slow descend in attempt to land, but as stated above the drone was over the lake so the drone could not be allowed to land.

Tom shared with DIYP the moments leading to the successful mission:

“We realized, about half way down the descent that the drone was not going to return as we expected via GPS. At that point I ran to the boat, started it, and raced towards the drone – about 1/4 mile. As the drone dropped to the water, we dropped the boat off plane and slid under the drone at the last second as the drone crashed into the deck. Drone and video footage saved!”

This is the first video I’ve seen of a boat saving a drone, but there have been several videos showing people running to catch their drone just as it’s about to hit the water. A great example is this guy’s drone that brilliantly captured the entire rescue operation.

If you’re worried your drone might have to land above water, you should consider making floating landing gear.