I finally did it! After sitting in my fridge for a few months, I managed to developed myself a roll of CineStill 800 pushed to 3200 ISO and the results look great!

It was intimidating at first but I was being overly dramatic, it’s actually pretty easy to develop pushed C-41 film at home.

If you don’t know what pushing film means, let me introduce this technique.

Basically, you purposely shoot a roll of film at a higher ISO, than it’s intended, in order to gain extra stops of light. This means that you underexpose your film, then compensate this lack of light by extending the developing time.

Why would I do this?

For example, if you are shooting in low light or need a faster shutter speed to freeze an action shot this technique can be helpful.

Black & White film photographers are usually familiar with pushing film because most of them are processing themselves at home and can adjust the developing time at their convenience.

On the other hand, pushing colour negative film is not as common as B&W film, simply because it requires manual development and most labs can’t handle these because their machines are 100% automatic. This is because, when shot at box speed, all C-41 films require the same developing time regardless of their ISO rating.

But that’s not an issue anymore and, like B&W film, you can develop colour film yourself too!

Before we get started, let me introduce our partner in crime: CineStill 800.

Initially, this is a film used to record motion picture film and that’s where it takes its legendary cinematic look from. The Brothers Wright made this film usable in C-41 chemistry by removing a layer called “remjet”. This allows us (and labs) to develop it without ruining our chemicals.

It performs best when shot under tungsten lights (city lights) but you can also get great results in daylight when using an 85B filter to adjust the light temperature. 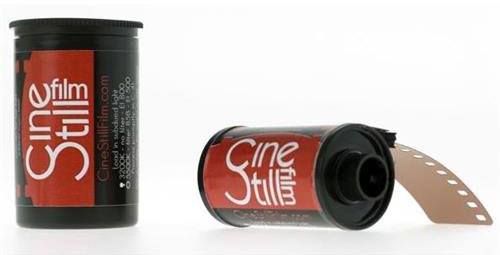 Another advantage of this film is that it can be pushed up to 3200 ISO and that’s what interest us today.

These images were all shot at night when I was in Vienna for my birthday. I wanted to travel light so my tripod stayed at home and this was the perfect excuse to push CineStill to its limits. You may have guessed it already but I used my Hasselblad Xpan and its loyal 45mm lens.

About the exposure, usually, you want to expose for the shadows when shooting colour film but here it was impossible, there was not enough light even at 3200 ISO. So instead, I exposed for the highlights and then added 1 or 2 stops when possible just to make sure that the darker areas wouldn’t be completely black. For what I remember, most of them were shot between f/4 or f/5.6 and 1/15 or 1/30 of a second.

Now let’s talk about the home development process. I ordered a Tetenal Colortec C-41 kit that comes in the liquid version. It also exists in powder version but I guess there are very similar in the end.

Basically, you get 3 solutions:

Each of them has to be used at a specific temperature which makes it slightly more challenging that developing B&W but it’s not complicated at all.

On the instructions, you can read that development temperature should be either 30 ℃ or 38 ℃. Today we’ll go for the latter as this is the one suggested for pushing film. It says that developing time should be extended by 30 seconds for each stop (no need to extend the fixer or stabiliser time). Here as the film was pushed by 2 stops, I should have added 1 extra minute on top of the 3,15 minutes recommended.

Thankfully, Paul from the Facebook group “CineStill Film Users” suggested adding 1,15 minute per stop to avoid having negatives too dark. I knew that my images would be very dark anyway and was afraid to get too much colour shifting by extending the developing time for too long, so I went for an average time and developed for 4,45 minutes.

The negatives still came out very dark but I managed to get the grain contained and the colours acurate. Then I slightly increased the exposure in Lightroom by 0.5 or 1 stop just to bring back some details. Last good point for CineStill is that it’s very easy to scan and colours look very good straight out of the scanner.

This result comforts me in the idea that CineStill 800 is a fantastic film that helps to push the boundaries of colour film photography in low light and I will certainly reproduce this experience.

Also, just to be clear with you guys, by no means I’m associated or sponsored by CineStill for this article. I bought every thing with my own money like a grown up adult that I am ;) It’s just an honest opinion on a film that I admire for its characteristics.

I hope this introduction to pushing and developing colour film didn’t scare you away and could give you some motivation and confidence to try this yourself too.

A crash course in developing colour negative film at home