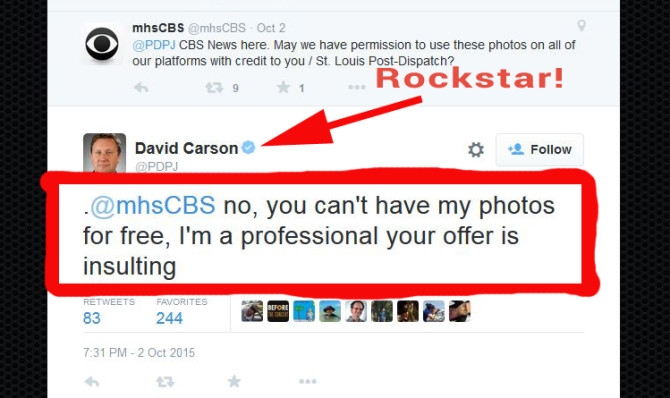 Chances are that in the time it took you to read this sentence, a photographer (or ten) was asked if his photos can be used for free.

This happens all the time and has gotten to the point where it doesn’t faze most people, but when a company valued at over $30 billion asks a Pulitzer Prize-winning photographer if they can use his photos in exchange for credit, you know you’ve hit rock bottom.

Keep reading to view the correspondence between award winning photographer David Carson and a Twitter account belonging to CBS.

Several days ago David posted photos on Twitter from a football game that was interrupted by gun fire nearby.

Gun fire on road next to Vashon vs Gateway football game interrupts play, so close you could smell the gun powder pic.twitter.com/ySkhgULYtD

Soon after he received a comment from an account named ‘mhsCBS’ asking if they could use the photos on “all our platforms”. Obviously they didn’t want to use the photos completely for free – they offered to credit David and the St. Louis Post-Dispatch for which he works.

@PDPJ CBS News here. May we have permission to use these photos on all of our platforms with credit to you / St. Louis Post-Dispatch?

I’m not flat out against providing photos for free. I think it all depends on where you are as a photographer, who the client is, what you’ll get out of it and many other factors.

But, and this is a big but, when you’re a winner of what is probably the most prestigious photojournalism award in the world and the party asking to monetize your hard work is a giant money-making corporation, there can be only one answer:

“@mhsCBS no, you can’t have my photos for free, I’m a professional your offer is insulting”.

.@mhsCBS no, you can't have my photos for free, I'm a professional your offer is insulting

It seems like ‘mshCBS’ tried saving face by responding that he could respond with his professional fee:

@PDPJ hi David. sorry to hear you took the request as an insult. for future reference, you can always respond with your professional fee.

but Carson didn’t let them off the hook so easily:

.@mhsCBS honestly you're kinda tone deaf, CBS is a multi-billion $ company & you ask to use pix for credit? No. Are you working for credit?

It appears that ‘mshCBS’ gave up on getting photos from David as they never responded, but that doesn’t mean they’ve changed their ways. A quick look at the account’s recent activity shows that this was common practice for them long before they approached David, and now they’ve just moved on looking for other suckers: 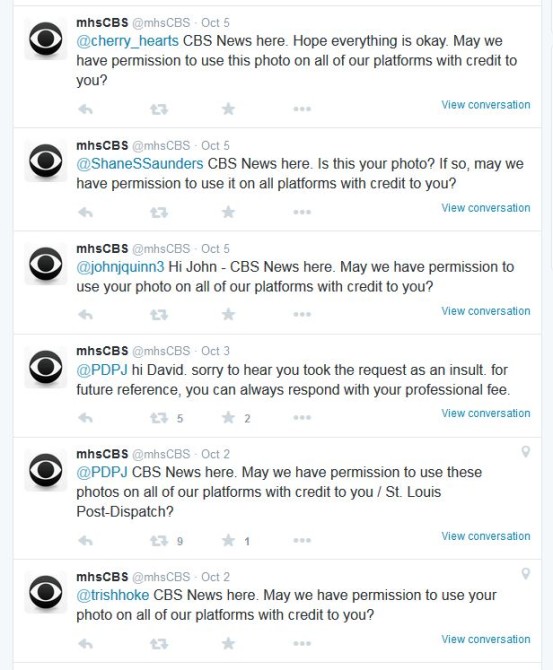