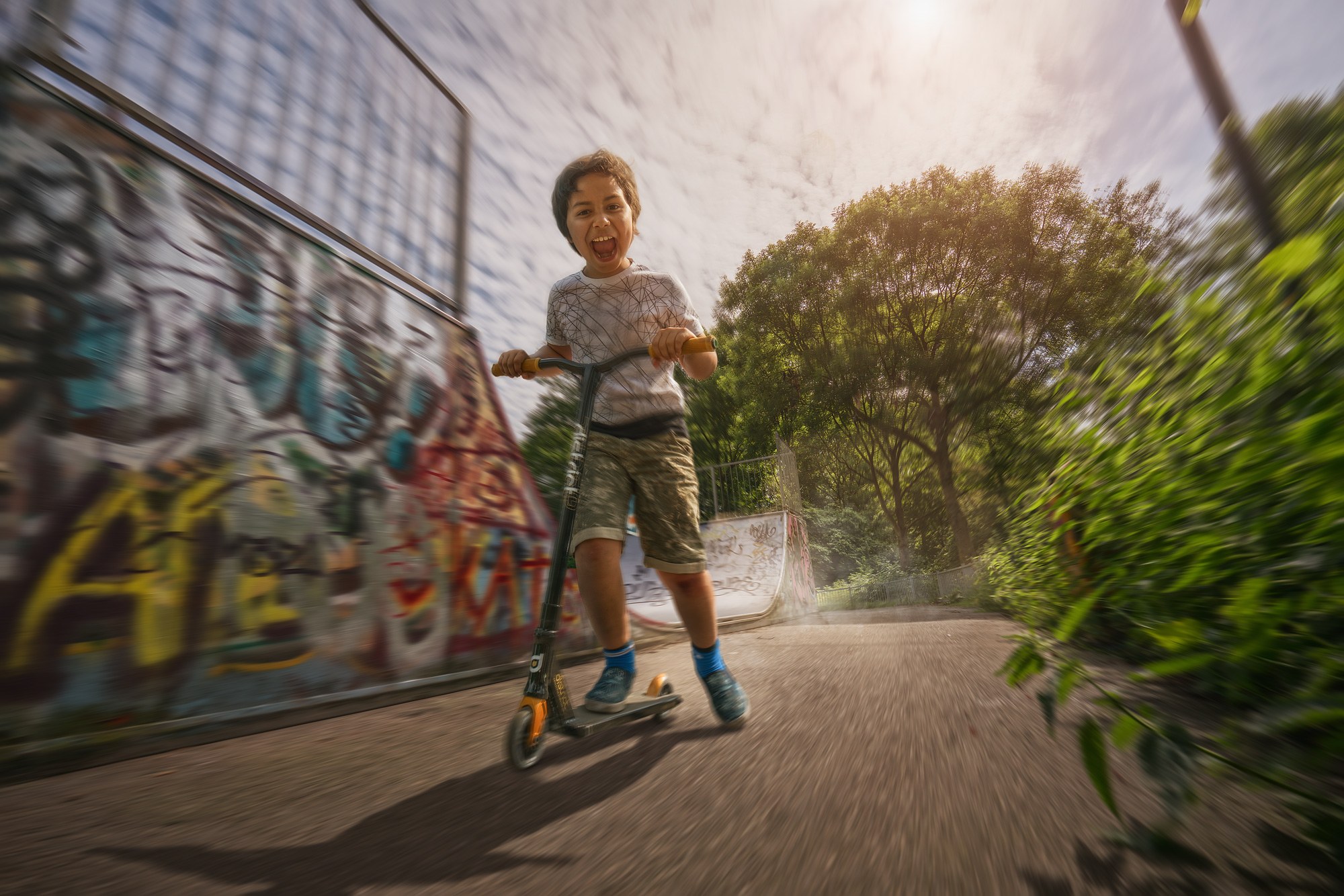 Shadows are often the hardest part when creating composites. In my workshop I often get the question can’t we just take a copy of the model, duplicate that, make it black and use that as a shadow. My answer was always ‘no’ till recently. I am gonna show you a way how you can (often) use your model as a shadow.

[editor’s note: we are huge fans of Aad Sommeling. Aad is big about sharing and we are quite happy that he allowed us to share this primer, if you want to get deeper into the world of compositing, there are also a few workshops he made that will help you get started]

It works only if you take the photos of your models yourself. If you are using stock images it is nearly impossible unless the light shining on your model is coming straightly from behind the model. A friend of mine, Renee Robyn, an awesome artist, shoots often her models at a grey background and can take the shadow in the photo to the composite. This is because her composites often don’t use sunlight as the main light source. So the soft shadows she gets from the lights in the studio, she can use, but my images have almost always the sun as the main light source and the sun produces harsh shadows, not a shadow with soft edges like you get when shooting with studio lights and specially when you have a softbox in front of the light, like I almost always have. Soft shadows are easy to create, but harsh shadows are a copy of the model and follow all the lines of the model. Not an easy job to draw, so… I thought about it and came with a solution that often should work ;) 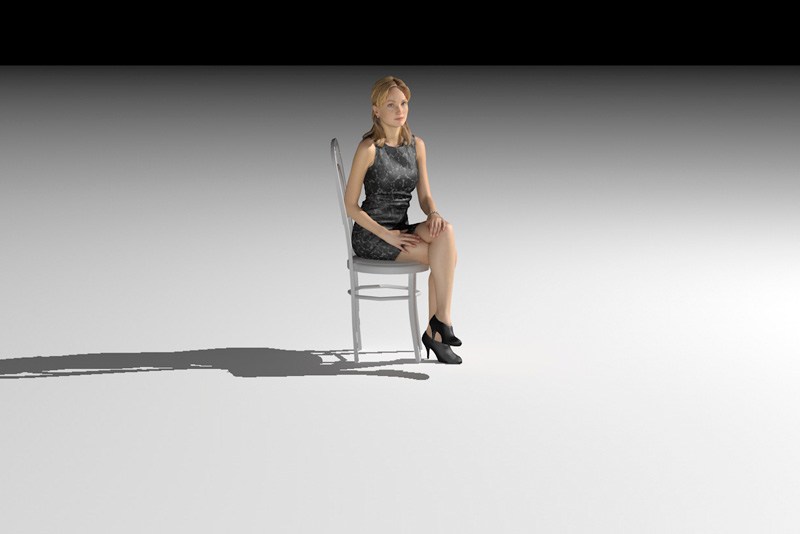 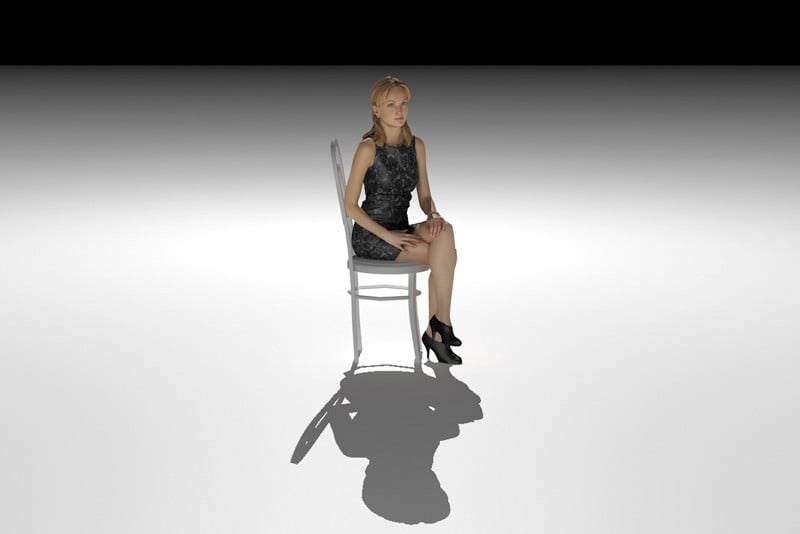 The shadow looks like the shape of the model seen from the photographers point of view.

Okay, in the two image above I show you why you almost never can use the shape of the model as your shadow. I will also show it below in the composite that I created for this blog. Above you see a 3D image. In the left image the light source comes from the right and in the other image from straight behind the model.

Shoot one extra photo to use as a shadow 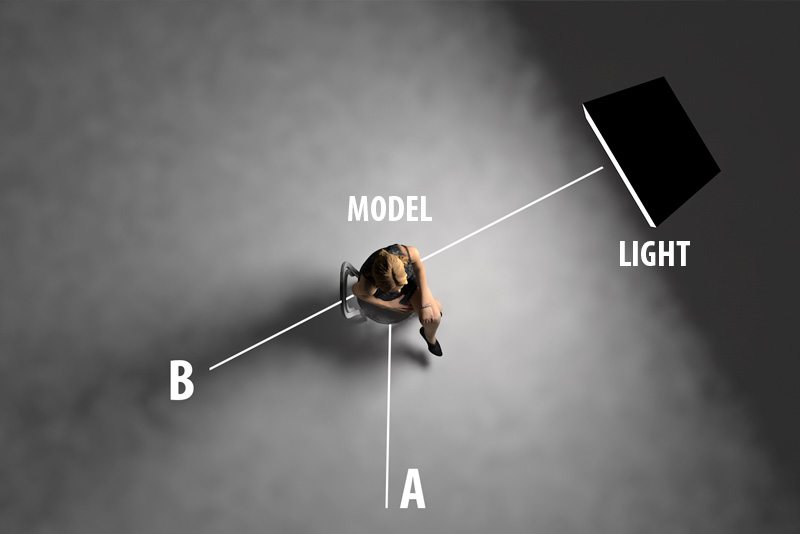 From theory to practice

Below I explain you how i put theory into practice. I will upload the photos I used for this image to the composite set in the store so the ones that already purchased the set can download them and play with it, if they want. They will be only available for a short period.

The example below, might look complicated, cause I shot it outside what I normally never do. Important only to keep in mind is that when you shoot your photo for the shadow, in the studio or at home, that you are in one line with the model and the light source. ;) 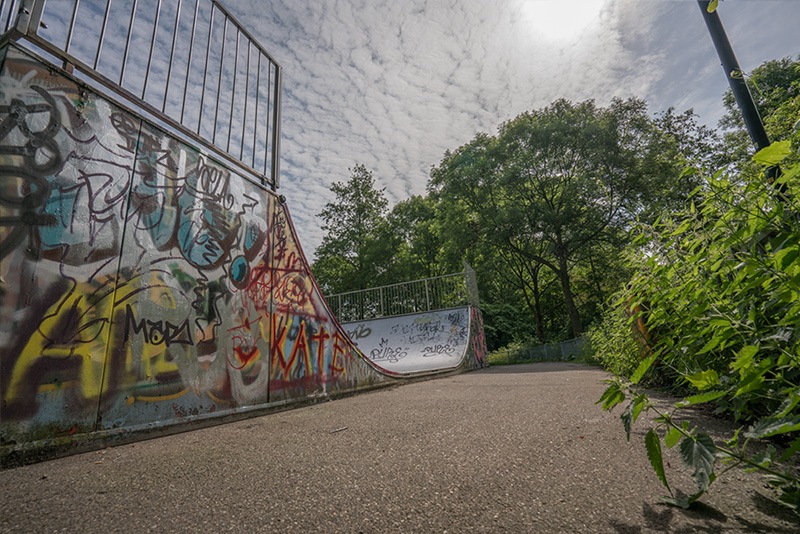 Lately, my son loves to go to the skate track and do ‘stunts’ with his scooter. I decided to go there in the morning, while he was still in school to take this image.  I shot this image, I like the colors of the graffiti, a part of the skate track  and the the lines going to the back. He wasn’t there at the moment, so I had to create a composite to put him in the scene. 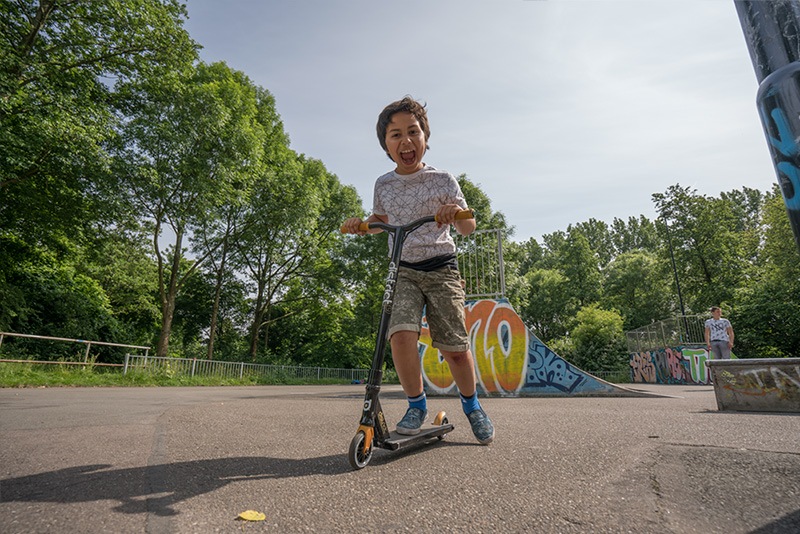 In the afternoon when he came from school I could shot an image of him. Usually I take the photos at home or in the studio with studio lights, but there was no time for it, so I took a photo of him at the skate track with the sun as my studio light. Here I cheat a little bit. If I wanted to do it completely realisitic with the background photo in mind, I should have taken the image of him, with the sun more behind him, but like I explained before, I don’t like that. I like it that there are rim lights on him, So I took the photo of him with the sun coming a bit more from the right. 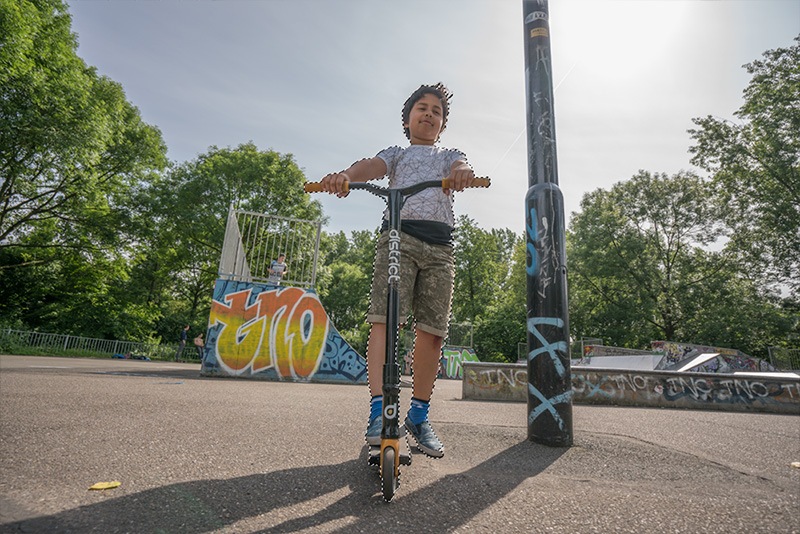 Now I had to take a second image of him for the shadow. If you see this image I took for the shadow, you can see, I should have went a little bit more to the left to get the best shadow, cause on the composite the sun is almost straight behind him. 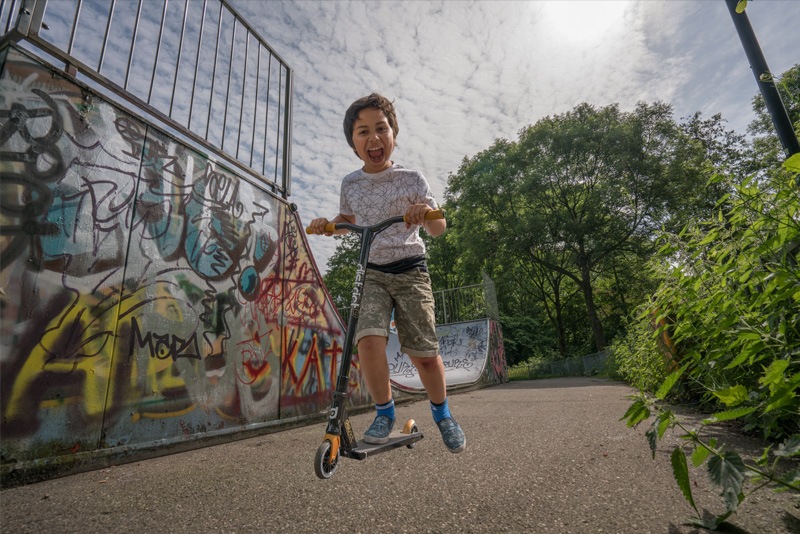 I cut my son out of the first image with the quick selection tool and placed him into the photo with the background. As you can see, it looks like he is floating without a shadow below him. 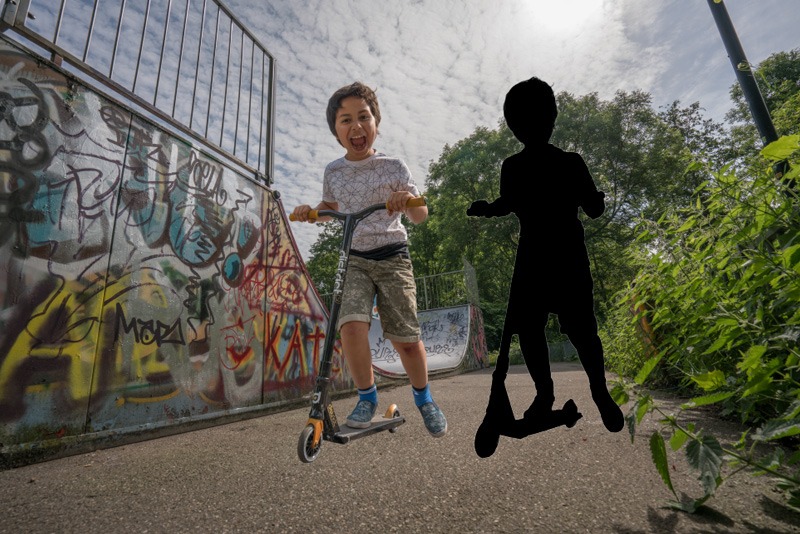 To show you why you almost never can use the shape of the model as a shadow I show you this and next image. Here I duplicated the layer of my son and made it black. 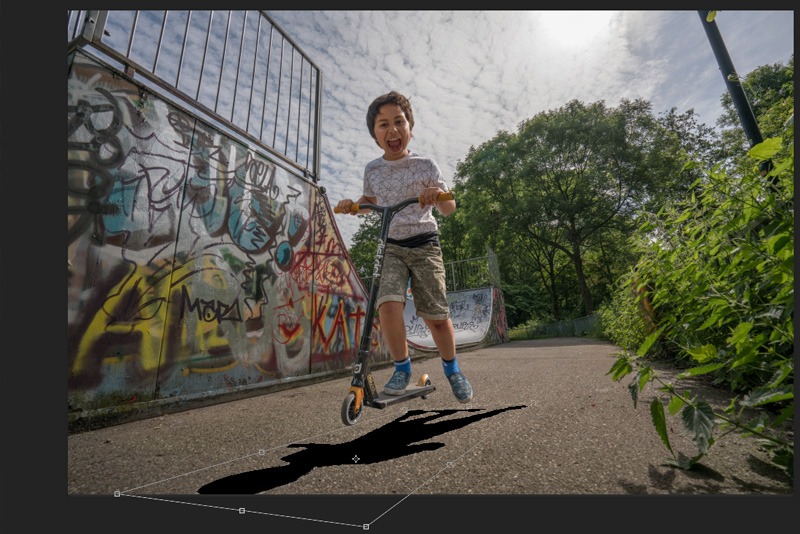 Now, with the transform tool I tried to put the shadow below him and fit it with the scooter and his foot, but couldn’t. 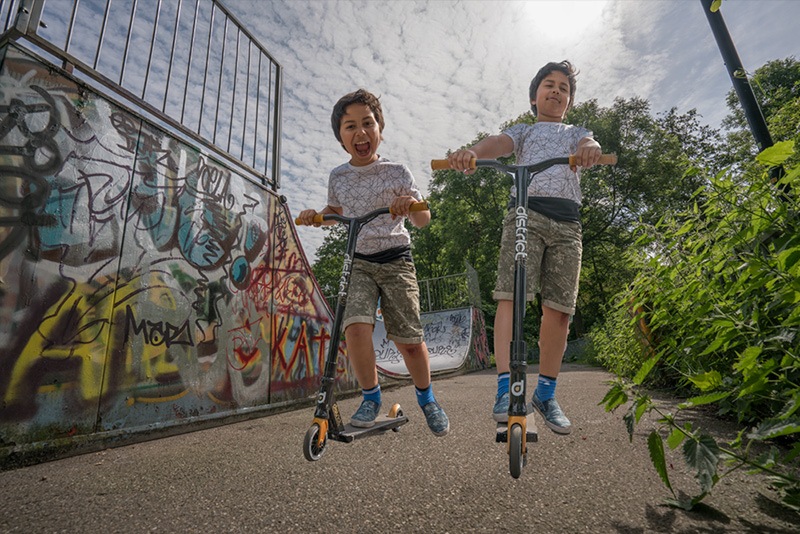 So, I took the second photo, the one that I took specially for the shadow, and cut him out with the quick selection tool. I copied the image and put him in the composite. 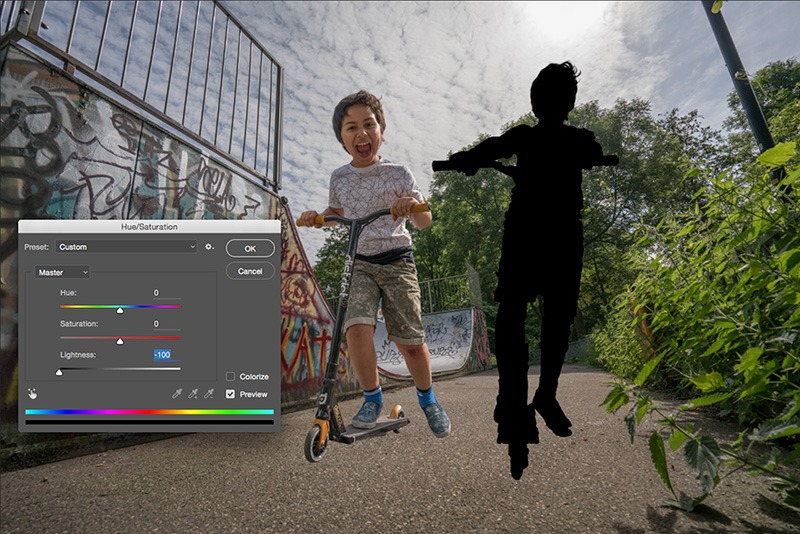 With hue/saturation I made the shape black… 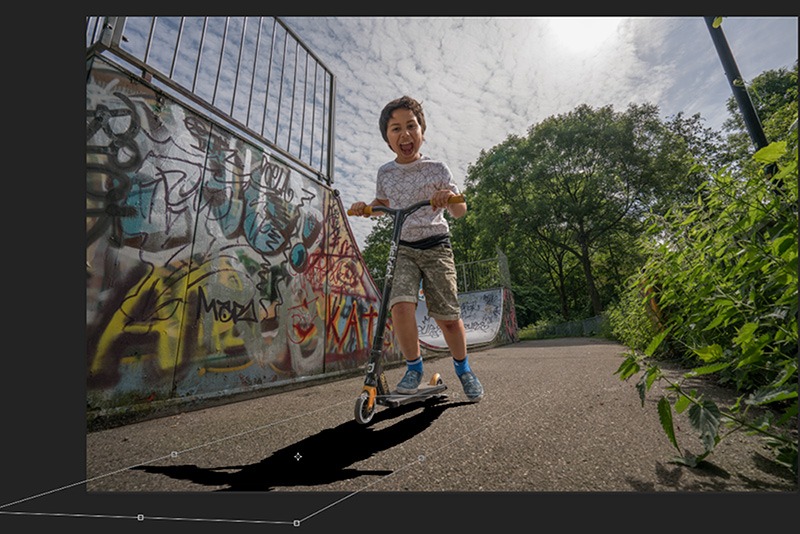 …and with the transform tool I put the shadow below my sun and see here, almost a perfect shadow. 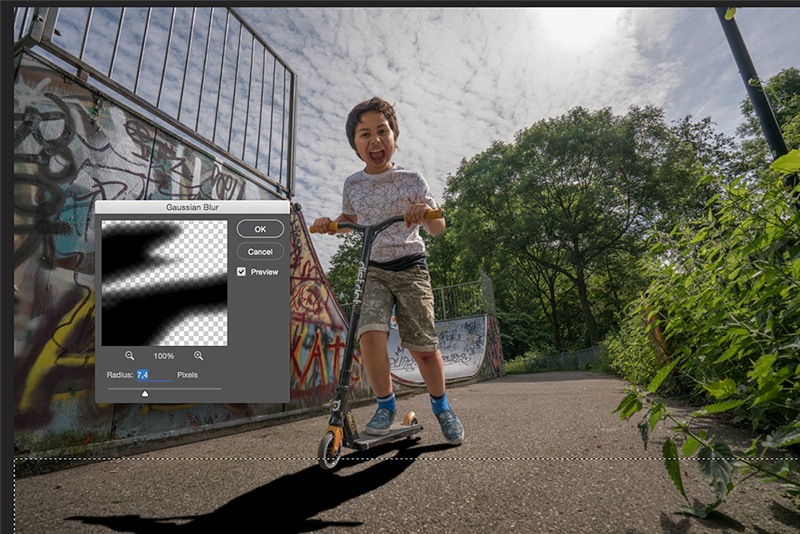 I blurred the complete shadow a bit, otherwise the edges are too sharp. After that I blurred the shadow of the parts of the model, that are is further away from the ground, a bit more to make it even more real. (more about shadows in my basic tutorial).

After that, I reduced the opacity of the shadow. Created some ambient shadow. Did my dodge and burn thing. Created a bit speed and finished the composite with Color Efex Pro with this image as result ;)

I hope this little trick makes your life a little bit easier ;). In this article I only showed you this little trick and not all the other steps that are important when creating a composite that looks like real. If you are interested in that you can take a look at my page with the tutorials. The third tutorial is already out and more are coming.

Adrian Sommeling is a photographer, digital artist, educator, graphic designer and web developer based in the Netherlands. With over 26 years of experiance Adrian has worked for both national and international brands and agencies. You can see more of Aad’s work on his webpage, Facebook and Twitter. You can also buy his workshops here. This article was also published here and shared with permission.