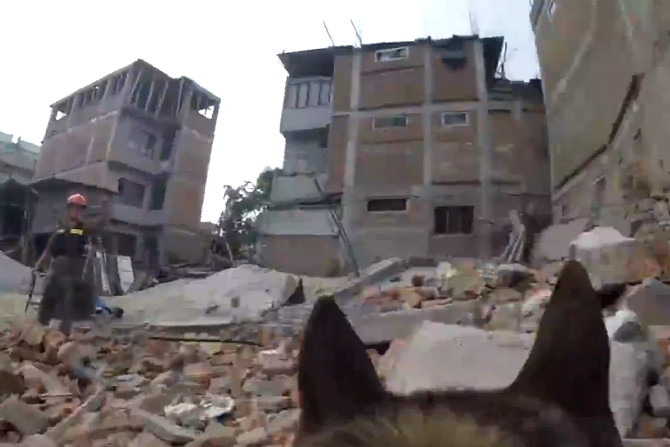 The worst earthquake to have hit Nepal in 80 years occurred last week, killing over 6,000 people and thousands more are still unaccounted for.

The international community rushed to offer assistance, with Israel sending the largest aid delegation consisting 260 doctors and rescue personnel. Joining the search and rescue teams are three dogs and their handlers belonging to the IDF’s Special Forces K-9 unit.

One of these dogs, who were specifically trained to locate signs of life and survivors in disaster areas, was equipped with a GoPro Camera and offers a unique view into the ongoing efforts to find people buried under the rubble.

As can be seen in the video, the dogs not only posses an acute sense of smell and hearing, they are also much better built for such operations. The use of disaster dogs enables the rescue teams to cover more ground, more effectively, and reach spaces people might not be able to access.

The IDF’s canine unit, Oketz, is regarded as one of the best in the world and includes dogs trained for additional missions such as detecting explosives, sniffing out guns and ammunition, tracking operations and assault tasks.

Below is another video showing the unit’s disaster dogs during a drill as well as a real life situation.

« Bring Your Lighting Game To The Next Level: The Power Of Shaping Hard Light
Will the Canon 1D X Mark II Offer the Best DSLR Sensor Ever Made? »