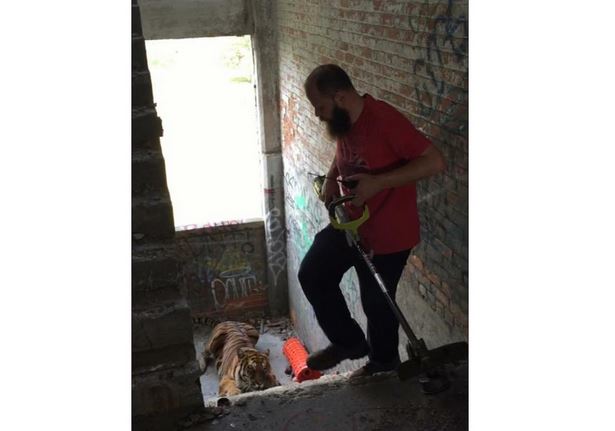 A word to the wise, if you rent a location for a photoshoot, you may want to let the location owners know in advance if you plan on bringing along a tiger, a wolf, and a bobcat. Photographer, David Yarrow, learned his lesson the hard way after he tried bringing along a small herd of exotic animals to the Packard Plant in Detroit, Michigan.

Representatives of the Packard Plant told the press, Yarrow did follow all the correct protocol in renting the facility out for a basic photoshoot; however, there was never any mention of bringing live animals.

She also added there was a professional trainer on site to handle the animals and no human or animal was injured during the incident.

The Packard Plant’s statement makes it sound like everything turned out just fine, which is a good thing (unless maybe you are the photographer who undoubtedly just lost a ton of money on a photoshoot that didn’t happen).

A local news station, Fox Detroit 2, is also reporting there were no injuries and the situation is now under control, but their telling of the events suggest that the tiger had, at one point, escaped from the crew and was roaming the facility freely. Maybe.

“Police say the crew let the tiger go at some point and are now unable to track down the wild animal. According to FOX 2’s Hannah Saunders, Packard Plant security confirmed the tiger was recovered safely. Detroit Police say the film crew has been kicked off the property and officials started searching for the animal… but has now been recaptured.

The same official also says the tiger was never out of anyone’s site but was free of any cage or chains.”

Not sure what to make of the contradicting stories coming out of various news outlets, of course, social media is taking the story into their own hands under the hashtag: #TigerWatch15

Yes, that person does have a weedeater. I’m not 100% sure, but judging by some of his other videos he was attempting to get the tiger to move down the stairwell to an area where his trainers were. Just to reiterate, the man in the photo is not responsible, nor connected to the photoshoot in any way. He was called in after the fact to help get the situation under control, which it appears has happened.

In other clips posted on the same Instagram account, you see electric hedge trimmers and hear a man’s voice saying, “This feels like the dumbest thing we’ve ever done.”