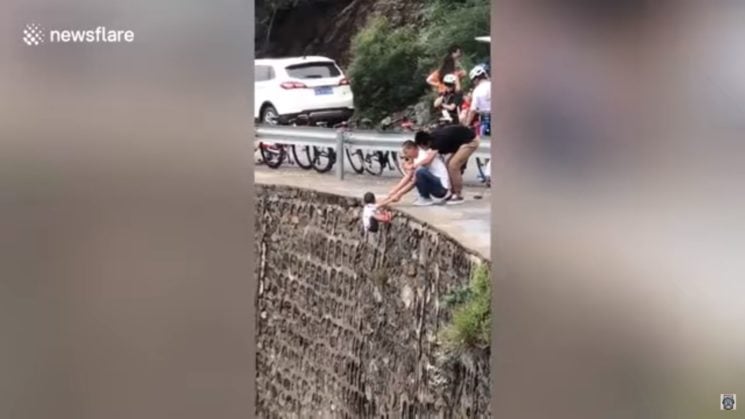 We’ve seen all kinds of stupid stunts people pull off just to take a photo. Nothing can shock us anymore, right? How about a father who is dangling his young son over a cliff for a photo? Yes, that happened. A man in China was caught on video as he was dangling a young boy over a cliff while another man was taking photos.

Daily Mail reports that the video was filmed in Beijing’s Hongjing Road, a local place with wonderful scenery. We don’t know the exact heights of the place where the video was filmed, but the twisting road reportedly reaches a height of 905 m (2,969 feet) above sea level.

The video was reportedly filmed on 12 July and it was originally posted on Weibo. According to Daily Mail, you can hear a person in the video saying: “Look, look! The kid’s hands are shaking!” As you can expect, the video received a ton of criticizing comments from the community. If you ask me, this guy should go to jail, too.

As I said, we’ve seen people doing all kinds of crazy sh*t just to get photos for Instagram. We saw a model dangling over a skyscraper to take photos. Or this “extreme yoga” lady who fell off a balcony while posing for Instagram. And these are just some examples. We also saw Michael Jackson dangle a baby over a hotel balcony almost two decades ago. Seeing how the public responded to that, you think people would have figured this out by now. But maybe I’m just too optimistic.

So, I probably shouldn’t be surprised by crazy stunts anymore. But damn, people always find a way to shock me anew with their stupidity and irresponsibility. I don’t know if this guy managed to get the “cool photos” that he wanted, but I’m sure that he managed to annoy the hell out of anyone who watched this video. And I sure hope that he will be identified and punished.